Capital Pride in Washington, D.C. took place just a few blocks from where I live. I wasn't there for a couple of reasons.

First, it was 93 degrees yesterday, and if you have ever experienced heat in the District, which is reclaimed swampland, then you know that heat and high humidity are not a perfect recipe for spending the day outside under the blazing sun. And to be honest, it's not even an option for me, as Lyme disease has rendered me heat intolerant. When I get too hot, I get Parkinson's-like tremors and shake uncontrollably, often accompanied by double vision and the feeling of an oncoming seizure. So, yeah, not really a fun day at the parade.

But to be honest, I thought about heading out for a few minutes. I tried to get myself in an upbeat, Rainbow Brite mood, a proud state of mind. I looked up #DCPride2016 on Twitter and saw encouraging things: For example, AARP is a participant, and I think that's pretty cool. I am only 38 years old, but it's good to see an older community embrace LGBT people. I only wish gay men would do the same.

After Twitter, I checked some LGBT sites to see if Capital Pride was being covered. One major publication ran a short essay called, "Sorry, Pride Only Celebrates Your Body If You're Fit." Oh yeah, I thought. Pride isn't for me.

The essay, by a young author named Jayson Flores, argues that Pride used to be inclusive, stating:

The muscular, fetishizing powers of Pride do have impacts on queer thought. Many people still keep muscular bodies in the forefront of their mind when they think of their fantasy partner(s). It's hard not to when we see something treated like it's better than everything else. The heart and mind tend to want what it perceives as best and/or the most unattainable.

If Pride were to appropriately display and honor bodies that look different, it would certainly have an impact.

The headline discouraged me from going to Pride, but the essay made me feel encouraged about the next generation of gay men. At least some people are cognizant of something that has troubled me for some time. At least an LGBT publication holds this as enough of a value to publish it.

Two and a half hours after publishing this (in my case) much-appreciated essay, the online magazine ran a quote-unquote story called "11 Workouts to Prepare You for Pride." The story is three paragraphs long: The first says to accept everyone as they come -- but "physical fitness also comes into play, particularly if you're tossing beads, holding signs, and dancing in the parades." The second paragraph is self-promotional, including a custom hashtag to get involved with the author's personal training business, followed by "Cause if you don't post a gym selfie after your workout, well, you're not doing it right." The last is a short bio about the "celebrity personal trainer."

So what's the story? It consists of a series of animated gifs showing the purported author naked, aside from short shorts, sock sand shoes, contorting. Comments from readers include "You suck! I'm done" and "what is this shit?" and "Wait, why would you run this article next to one discussing body shaming in pride parades??? I literally don't have to scroll down the front page or anything."

The comments on Facebook are more condemning: "Articles like this make me want to puke and only make me further hate 'gay culture'" and "Disgusting and slap in the face to the regular guys who aren't muscular. Thank you for telling the rest of us that we are too out of shape to be gay."

So that settled it: No Pride for me. I wish I weren't so cynical -- although to me the word "realistic" feels more appropriate -- as to think that both these articles are true, but I'm not. I've discussed this before, and I will continue to do so. Why?

Well, one Facebook commenter railed at the scores of those who complained: "People need to stop b!tching about hoe young guys don't want to bang you. Date guys your own age."

This is not about that. At all.

This is about the flag that supposedly represents us.

The rainbow flag, and even the HRC's equal-sign logo that has in many cases supplanted the rainbow to represent LGBT people, stands for inclusiveness. But gay men have made their community (I can't say ours, not in good faith.) exclusive to those who fit a certain mold. And that mold is well defined: Young, gym-sculpted, smooth skinned, usually light skinned. Again, when I ranted in what was meant to be a tongue-in-cheek yet sincere way about hypocrisy I was seeing, I got a lot of cheering from gay men who don't fit into this mold, and also quite a bit of jeering from gay men (including porn star Billy Santoro, age 40, who tweeted his disdain and said he doesn't associate with old gay men like me (38); I would post the tweet, but his Twitter account appears to have been suspended) who feel that this mold is the natural order of things -- that being gay comes with the responsibility of "taking care of yourself," which I've learned does not mean, for example, practicing safer sex, but rather conditioning oneself through weight training, lest one carry the shame of a physique that doesn't resemble a Greek statue.

I am conducting a survey of gay men to assess cultural interests, perceptions, and values. I have taken countless LGBT-related surveys, but every single one of them has focused on marketing preferences or HIV/AIDS insights. This one looks at something else.

So far only 102 individuals have taken the survey, but the insights are, well, insightful:

Although 91 percent identify as gay and 5 percent as bi, only 38 percent feel that they belong to the gay community.

26 percent said that attractiveness is important or very important when determining whether or not to befriend another gay man.

Under 2 percent said that, among all their friends (straight, gay and in between), they have zero friends who belong to another ethnic group; however, almost 18 percent of gay men have zero gay friends from different ethnic groups.

37 percent said they feel obligated to lift weights in order to be accepted by the gay community.
46 percent said that gay men are less kind to one another than they are to non-gay people.

All this leads me to ask what the gay community really stands for. What are we doing nowadays? A slideshow of historic LGBT Pride photos from the 1960s versus those today on that same website showed in the older photos men and women who were -- you're not going to believe this, or possibly not like it -- almost entirely clothed, and who were more or less average looking. The great majority of photos from today showing men showed fitness model-type men in underwear or swimwear and nothing else, or showed men in drag. A few "average" people were peppered in -- mostly those with children, I suppose to say, "we're just like you" -- but the overall messaging to gay men is, "you should look like this," accompanied by a supposed article showing you how to look like this.

I received an electronic press kit about a month ago from a major international city's Pride celebration, which linked to a photo slideshow. I was struck, but not surprised, that literally every photo showing a man showed a pumped-up, sculpted Adonis in Speedos or underwear, or else an overweight drag queen. Nothing else.

This is not diversity. This is not a full spectrum of humanity meant to be represented by the rainbow flag, nor is it the inclusive representation symbolized by HRC's equal-sign logo, which has taken the place of rainbow stickers on most cars, at least where I live.

Can this change? Should this change? I don't know. When I discuss it with people, I hear a pretty consistent reply: Get over it and move on with your life. If you don't feel like you're welcomed by the gay community, it doesn't really matter -- because the gay community came together over oppression and was cemented by a tragic health calamity, and now those things are for the most part relegated to history. Gay people and straight people alike have been telling me recently that gay people are being integrated fully into the overall, hetero-dominant world, and gay bars and clubs are dissolving as they have been rendered more or less obsolete by Grindr, Scruff and similar mobile sex apps.

(No one would pretend at this point that the trans community has been integrated in such a way, and I feel obligated to and interested in speaking out on their behalf because, I don't know, that whole golden rule thing.)

So I'm curious to hear from other people: Should this change? Or does it not matter? For anyone who understands anything about marketing and advertising, it's impossible to deny that the idealized images being sold to and bought by the gay community are driven by the selling of alcohol, vacations, insurance, and a broad spectrum of other goods and services. In fact, the only thing that seems to be diversifying among the LGBT community are the numbers of marketing surveys and companies hoping to target this supposedly affluent population with a high disposable income. If this is the way we like it, then I'd suggest we replace the rainbow flag and the equal sign alike with a whitewashed flag featuring the silhouette of a bodybuilder in a suggestive pose, holding a martini glass in one hand and in the other, his obscenely engorged wallet. 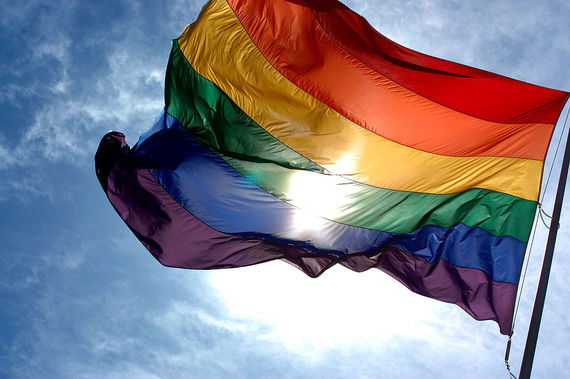