At least three protesters were escorted out of Thursday's Federal Communications Commission meeting on proposed Net Neutrality rules before the hearing even began.

"You're trying to destroy First Amendment rights to free speech and free press," a man who identified himself as a veteran of the Vietnam War said before being escorted out by authorities.

The FCC voted along party lines to open up comments on how to regulate Internet traffic in a way that would treat all websites equally. Critics fear the proposed plan could allow for a "two-tiered Internet," where deep-pocketed companies could pay to access a "fast lane" on the Internet. 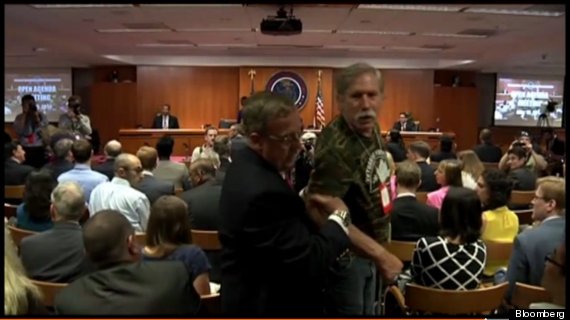 A protester is removed from Thursday's FCC meeting on proposed Net Neutrality rules.

"My point when I stood up was to say to the commissioners and everyone in the room is that we have a crisis of democratic legitimacy in this country, because we're ruled by money not by people," Kevin Zeese, a man who was escorted out of the meeting by police, told The Huffington Post. "They need to protect the public's interest not the corporate interests."

In January, a federal court struck down the 2010 Open Internet order, which had established Net Neutrality, so there is currently no rule that could theoretically prevent an ISP from favoring traffic from one service over another.