Twenty years ago, I was a stay-at-home Montana mom living in a place where the large carnivore population (wolves, bears, cougars) outnumbered the human population. Parenting our daughters here required learning new life skills--such as wildlife tracking. Before I could send our kids out to play, I'd go tracking in our yard and woods to see who'd been around. If I found fresh grizzly bear or cougar tracks, I planned an indoor activity instead. This strategy worked well.

Beyond keeping my family safe, tracking had many personal benefits. It sharpened my senses, gave me a keen awareness of the wildlife community, and made me feel part of the natural world, rather than a detatched observer. And when I eventually returned to college to become a scientist, my tracking skills provided the foundation for my wildlife research.

The past 40 years have brought great technological advances in how we survey animal movements. In the 1970s, scientists pioneered the use of Very High Frequency (VHF) collars that send out radio signals to indicate animal locations--called telemetry. In the mid-1990s, this technology leapt forward with Global Positioning System (GPS) collars that collect animal location data via satellite signals with up to one-meter accuracy. 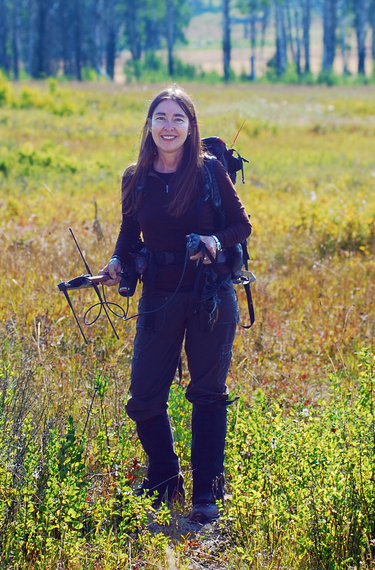 The Author Radio-Tracking a Wolf
Photo by Brent Steiner

VHF- and GPS-collar data enable scientists to answer questions about how animals use a landscape. However, this technology is expensive and invasive. Collars can cost several thousand dollars, and actually placing one on an animal can cost thousands more for trapping, helicopter time, and veterinary care. While animals recover from being trapped or net-gunned from a helicopter for collaring, and these procedures usually don't injure them, the experience can be traumatic. Cameras set to automatically record images when an animal walks by (called camera traps) are minimally invasive, but also expensive to purchase and maintain.

However, long before such technology existed, wildlife biologists tracked animals the way humans have for millennia--by following their trails, identifying their tracks and droppings (called scat), and finding their dens, rendezvous sites, and carcasses. Today, thanks to scientist-trackers who have standardized such methods and championed noninvasive work, wildlife tracking has made a tremendous comeback as a top wildlife survey method. 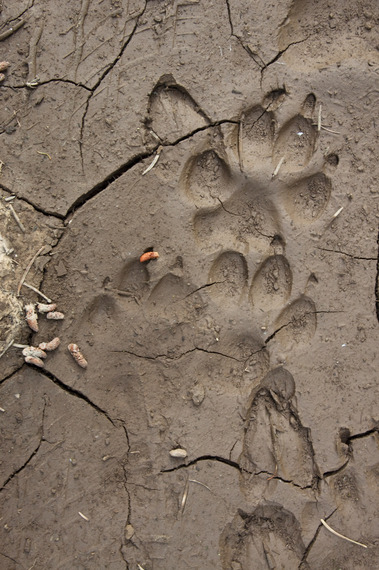 When I began to study wolves and their prey as a scientist, I used VHF and GPS collars, but also turned to traditional wildlife tracking. In 2007 as a PhD student, I worked with Parks Canada conservation biologists to standardize my tracking methods. I learned to collect wildlife data in transects that systematically cover a whole landscape. By trial and error, I learned a large sample size (e.g., 100 kilometers of transects) supports even the most sophisticated statistical analysis. While this sounds like a huge effort, the transect work goes rapidly. 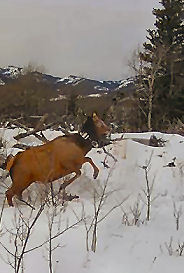 Since 2008, my colleagues and I have been studying two fires in Waterton Lakes National Park, Alberta: the 2014 Red Rock Complex Prescribed Fire, which burned 2,300 hectares; and the 2008 and 2015 Y-Camp Prescribed Fires, which burned 1,200 hectares twice, in April 2008 and April 2015. The sites contain a very high elk density and two wolf packs. Management objectives are to reduce aspen land cover and restore the prairie within the burn units. In these sites we're studying how fire and wolves influence elk behavior. We want to know whether restoring two out of three key ecological forces in this system (fire, wolves) without restoring the third (bison) is sufficient to return this fescue grassland to pre-Euro-American settlement conditions. 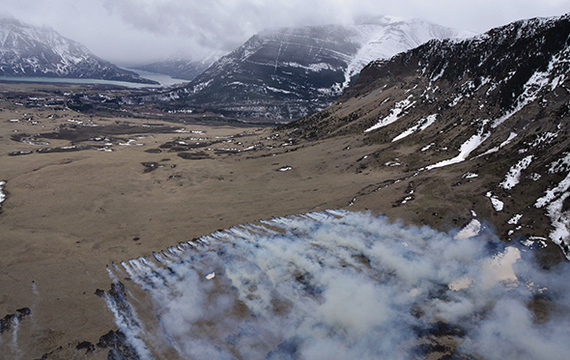 While we've had 17 elk GPS-collared on this project, we've found given our study questions, that track transect data, which cost one hundredth of what GPS collar data cost, provide the most accurate way to determine where elk are spending their time. These data permit analyses of the potential drivers of elk behavior, such as food and wolf predation.

Accordingly, in the spring between snowmelt and greenup, we collect track transect data on elk, deer, moose, wolf, bear, cougar, and coyote presence. The 1 kilometer-long, 2 meter-wide transects extend from the prairie deep into aspen stands and are based on the plots in which we collect grass and aspen data. Since 2007, volunteers have been joining me and our technicians for this work, which is both highly rigorous science and the ultimate tracking adventure. 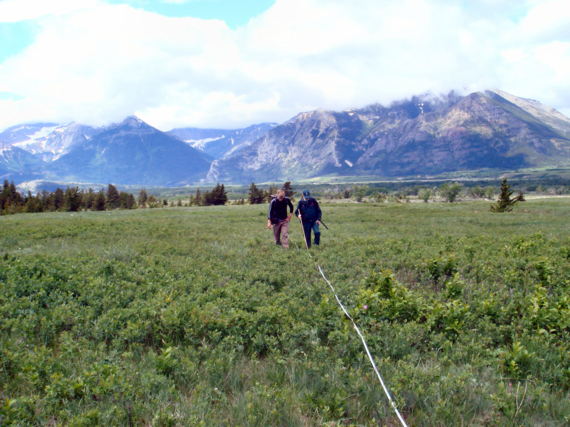 Over time, our track transect data have revealed astonishing things: a pair of wolves killing an elk on our transect line as we walked the transect; an alpha female wolf we didn't know existed feeding on a fresh elk carcass in a high predation-risk transect; a pair of grizzly bears mating; a cougar stalking elk. These transects give us a window into wildness and are enabling us to quantify how wildness creates healthy, resilient grassland and aspen communities. 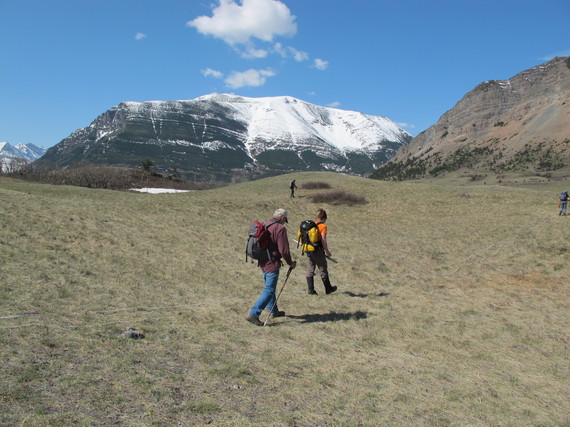 Earthwatch Institute, Parks Canada, and Oregon State University support our work. Our data thus far are showing that elk avoid areas that have highest predation risk, although those areas also have the most plentiful, high-quality food. Elk in our study spend time where it's easier for them to detect and escape predators--such as the edges of an aspen stand--but which have less abundant food. We also found that the more severe a fire, the higher the predation risk for elk.

I hope some of you will consider joining us in the field for this work (Tracking Fire and Wolves through the Canadian Rockies), which takes place in May of each year and provides an excellent learning opportunity and immersion in one of the wildest, most intact North American landscapes. You can help us answer questions about how the size of an aspen stand influences predation risk and elk browsing, and what happens when an area is burned repeatedly. Together we can quantify wildness and increase our understanding of the ecological role of wolves and fire.