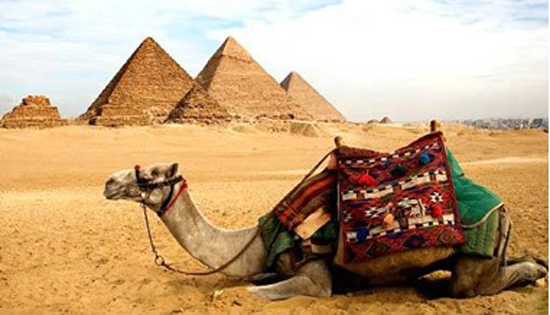 Hosni Mubarak has been Lord of the Nile since 1981, a seemingly long time.

But not really. There was a forerunner who ruled Egyptian waters for thousands of years, who influenced untold millions, who was revered and feared, whose images were emblazoned throughout the land, and who was finally ousted, ignobly: the crocodile god, Sobek.

The ancient Egyptians elected Sobek into their pantheon. A temple was built to the deity on the island of Kom Ombo between Aswan and Luxor, where mothers of children eaten by crocodiles felt privileged to have provided something for Sobek's delectation. And there were sacrificial pools at a city in the Fayoum Valley called Crocodopolis. The story went that once upon a time Menes, first king of all the Egyptians, was set upon by his own dogs while out hunting. In his flight he came to the Nile, where lay a large croc baking in the sun. The croc, rapidly sizing up the situation, offered to ferry the desperate king across the river. With all saurian ceremony, Menes was sculled over to found a city in about 3000 BC that would worship crocodiles, a city that under Ptolemy II was christened Crocodopolis. Henceforth; it was believed that if Sobek were appeased, he would allow the fragile papyrus boats used to ply the Nile to remain unharmed. About 300 B.C., when the army of Perdiccas was crossing the Nile at Memphis, it forgot to pay Sobek homage, and 1000 soldiers were killed and eaten.

When I started an adventure company that would explore the outer reaches of the Nile and its tributaries, I chose Sobek, a gesture to appease the god, with hopes he would allow us safe passage. The eponym served us well. For the next ten years I made a number of first descents of upper stretches of African rivers, including a section of the Blue Nile that had defeated the British, and though all the rivers were populated by man-eating crocodiles, for the most part they left us alone. Ok, we had a few rafts bitten by crocodiles, but more by hippos, and we suffered no mortification of the flesh. It seemed Sobek was indeed looking kindly upon us, and so, in 1983, for our ten-year anniversary, I organized a trip to visit Kom Ombo, the Sobek temple, to pay proper tribute.

It was a quick three-day excursion on a cruise boat, and once at the nearly vacant house of Sobek, where only a few foreign researchers milled about, I drank in the seemingly mystical exhibition of the crocodile-god in a gallery of ancient Nilotic scenes. I left an offering of a Sobek catalogue, an inscribed Sierra Club cup, and a t-shirt at the base of a an engraved depiction of the god. But one thing left me wondering. Throughout the journey we saw not a single live crocodile on the Nile, and when I queried the captain, he said there were none left, gone like the pharaohs. In Egypt, he explained, they had all long since vanished, hunted or died out from environmental shifts.

For the next two decades my colleagues and I continued to run expeditions around the world under the Sobek imprimatur, and for the most part they were successful. But as Sobek saw us through, I wondered about the source of the mythology, and what happened to the river dragons, so indestructible, so revered, closest living relatives to the dinosaurs, existing little changed since long before Man walked along the Nile, yet now gone.

Then in 2003 I helped organize an expedition that hoped to make the first full descent of the Nile from its Blue Nile source in Ethiopia to the mouth near Alexandria, Egypt. My friend Pasquale Scaturro lead the five-month long voyage, and as I waved goodbye to him on the banks of Lake Tana in the highlands of Ethiopia he promised to check in every few days on his satellite phone. "Watch out for the crocs. They're always looking for a hand-out," were my departing words.

Indeed the expedition was charged by several large crocodiles as it made its way down off the Abyssinian plateau and into Sudan...a kayak paddle was chomped at one point. But the real surprise was when Pasquale passed into Lake Nasser in upper Egypt....he called and reported, "You wouldn't believe the size of the crocodiles here...they're monsters!" I was surprised, and in some strange way, delighted with that news. I had thought crocodiles were gone from Egypt, but they were, according to Pasquale, coming back, in a big way.

So it was I crafted a confection, to travel to Egypt and follow the Nile upstream from Alexandria to Upper Egypt and Lake Nasser to inquire a little into the crocodiles in myth and underhistory, and know why they disappeared, and how they might be returning, a quest for the Lord of the Nile. I owed a lot to Sobek, and wanted to see if I might mine some understanding, and perhaps find a way to give back.

The Eastern Harbor of Alexandria curves like a scimitar at edge of the Nile Delta. It was here that crocodiles in great numbers lingered at the stitch of fresh and salt water, a seam rich with nutrients and fish. During the annual flood some were swept seaward and found their ways to shores as distant as the Aegean and the Levantine Coast.

In the time of the Ptolemies this port was the center of learning of the civilized world, and texts and manuscripts were brought to its library from everywhere writing existed. But during the time of Julius Caesar the library was burned, and the city fell into decline.

The ancient library has been replaced by a new one, the Bibliotheca Alexandrina, spearheaded by UNESCO and completed in 2002. 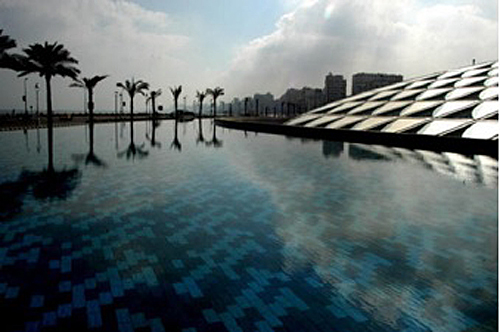 The Library of Alexandria

Crossing the wide boulevard of the Corniche I head into the tilted, circular-shaped building that with a squint looks like a rising sun. I find my way across the cantilevered study halls to one of the hundreds of computer terminals and there begin to scroll through the titles, assuming that if there is a repository of information on the reptiles of the Nile, and Sobek, it would be here.

After poring through tomes a possible explanation for one of the riddles of the Nile begins to emerge. It was the crocodile, in a fashion, responsible for the pyramids, and the great tombs of Egypt.

The ancient Egyptians watched helpless each summer as the life-giving Nile receded and left their fields barren. Then come September, under clear blue skies, the river would run in spate, bringing swarms of crocodiles, and the rich soil and nutrients that would replenish the black and dead soil. It was a mystery from where the crocodiles and the new soil came, and why, but the Egyptians looked on as lifeless land was reborn, and crocodile eggs were laid with the season.

Just as the sun died and was reborn each day, so the soil was resurrected along the Nile each year as the crocodiles came. Crocodile eggs hatched and created life out of nothing. These annuities, it might be conjectured, gave the Egyptians the idea that the crocodile was the agent for this rebirth, giving them reason to believe that they, too, could restart life after death.

So, Sobek became a god of fertility and rebirth, and Egyptians inferred that if Sobek could give the land a new life, then he could to the same for humans. Accordingly, the Pharaohs endorsed the concept of an afterlife, and believed they could bring possessions with them. So, they built enormous tombs, filled them with their effects, and had themselves mummified in preparation for the journey. Perhaps as guides to the afterlife crocodiles were also embalmed in sarcophagi in these tombs, placed alongside canopic jars filled with vital organs necessary for the thereafter.

If this theory true, I am not the only one who owes a debt to Sobek....but everyone who has ever admired the pyramids, or the tombs of the Valley of the Kings, as well, monumental aesthetic gifts that have endured for millenniums.

Of no surprise this library carries the Egyptian Book of the Dead, the cheat-sheet to the afterlife for dynastic Egyptians, rich with references to Sobek. In one passage the crocodile god speaks:

"I am the owner of seed who takes women from their husbands whenever he wishes, according to his desire. I am Sobek, who carries off by violence."

A key description in chapter 125 of the Book of the Dead is that of the weighing of the heart, a precursor to the Christian concept of the Last Judgment. The heart of the newly dead was placed on one side of a scale. On the other side was a feather from the Goddess Maat who represented order and justice. Looming nearby was the hell-mouth of a crocodile- headed monster.

If the scale balanced, the God of the Underworld, Osiris, would lead the deceased to reanimation in the next world. If unbalanced, the heart was tossed to the crocodile-headed monster and devoured.

Sobek as a spirited demiurge was associated with death, but also sex. In the Pyramid Text, Sobek's lusty stealth and sexual potency are described, wherein the king changes into a crocodile before robbing husbands of their wives. Another passage speaks to Sobek's contravening powers...women would use the dung of crocodiles as contraceptives.

Still other texts suggest it is a stroke of good fortune to be gobbled by a crocodile. And so it is that the relationship with the Nile crocodile is a conflicted one, dreaded and worshiped, seen as an instrument of death, fertility, regeneration, and channel to the next world.

The brilliance of the ancient imaginings of Sobek is that it's current of moral energy ran both ways, just as the Nile for navigation. Creator, destroyer; good, evil; a god, the devil...like its amphibious nature, between land and air, it evoked ambiguity, a place between and of, a duality in motion, ultimately a spiritual device that covered all bases.

After scouring the library I can find no reference to crocodiles returning to the Nile, so I set out upstream to see if I can find the lost beast, and make some sort of approbation.

This is Part I in a five part series. Read Part II here.