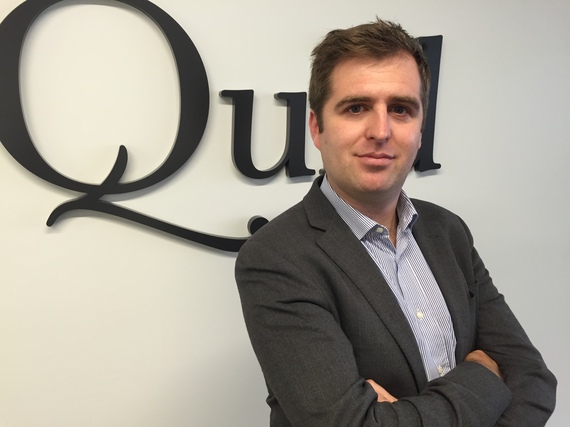 Neville Crawley is the CEO of Quid, a platform that searches, analyzes and visualizes the world's collective intelligence to help answer strategic questions. Unlike typical bay area CEOs or Founders, UK-born Neville has an extremely fascinating background. We talk to this former McKinsey consultant about his journey, a journey that began in the most unlikely of places - night clubs of London, where he was DJ, video director and producer.

S: What inspired you to study the fine arts?

N: I started painting seriously when I was 13 or 14 as a way to process my experiences and the world around me. I was big into partying, so I went out all weekend to raves in and around London, then painted every day during the week to try to capture the 'kairos' - the supreme moment.

It was a very pure and naive motivation. Later I discovered the great, painterly abstract expressionists (De Kooning, Pollock and others) and fell very much under their spell.

S: Why didn't you pursue a career in this area after graduation?

N: From 16 to 21, I did nothing but visual arts and music around the clock: first painting, then producing music, then directing pop videos and doing visuals at night clubs.

It was a blast to have success at such a young age, but I was also just really curious about the world out there and its many facets, including the world of commerce and other languages and cultures. When I was 21, I walked out of my studio, got myself a backpack and a one-way ticket to China and set off to explore the world.

At the time I think my friends thought I was crazy to walk away from a record deal and all that stuff, but I was just ready for new experiences and wasn't thinking about career at all.

S: What were you doing in China?

N: Ha. Well, looking back it seems like a really funny story.

When I landed in China, I first got a gig teaching catwalk models English - a tough break, right?

Then I started bringing DJs from the UK to play in Shanghai nightclubs. This was around 2000, 2001, so way early on. Nightclubs in China were wild then - people had freedom and money for the first time in generations and really there were no limits.

Then I ended up running a publishing business that became pretty sizable, reporting finance and economic news. I ran that for 4 years and, looking back, doing some pretty groundbreaking things. 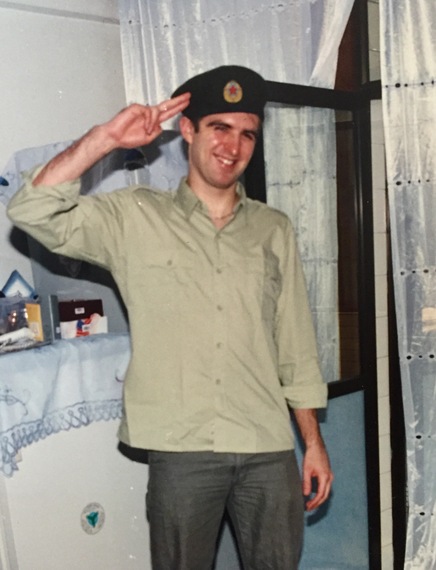 Crawley in a Chinese military uniform soon after landing in the country in 2001.

S: How did you end up there?

N: Really, I just got on a plane, landed, rented a $100-a-month room with no running water from a Chinese military guy, and figured it out.

You've got to remember that this was only 3 years after the Asian financial crisis, when Soros crushed the Malaysian Ringgit, and before China had joined the WTO. It was not obvious at all that China would emerge the way it has. There were hardly any foreigners in China at that time, so it was an incredibly open field. 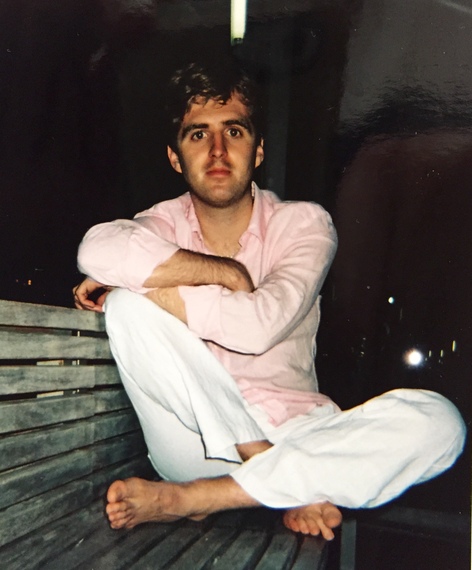 S: How did you end up at Quid?

N: After I left China I decided I wanted to study finance. I made my way back to the UK and into London Business School and then into McKinsey, the management consultancy, to work with Middle East governments on financial restructuring through the sovereign debt crisis.

That was an extraordinary experience which I loved every minute of - living in Dubai, and getting to work directly with senior finance ministers. But given my 'non-traditional' background and the unusual nature of the work, I kept needing to learn about new things fast. I discovered a service called GLG, which will hook you up for a one-hour phone call with an expert on anything for about $1,000 per hour.

I truly loved GLG, so after 4 years of living on a plane with McKinsey, I moved to New York to work with GLG directly.

I learned many things at GLG, but one of the biggest 'aha' moments for me was figuring out that a lot of the human intervention of matching questions to experts is essentially a graph / NLP (natural language processing) problem. So, I went out looking for companies that I believed had solved this technology problem and found Quid.

Originally I thought Quid could be a great acquisition for GLG. But as I got to know them I realized that Quid could be transformational for gathering and processing information on a Google-level scale, and so the acquisition went the other way and I joined Quid.

S: What were your most seminal experiences?

N: I think my seminal experiences have all been about technology and empowerment to create.

I still recall as a kid the first time I got a drum loop going on an Atari computer, overlayed a bassline with it and realized: 'Oh my, I can create professional music in my bedroom and I don't need anyone or anything else to do that'. It's like the whole punk DIY thing; that feeling blew my mind and really changed the course of my life.

Later I had the same feeling directing videos and editing on Premier, laying out the Chinese magazines on Pagemaker, and building those big financial models in Excel at McKinsey.

A friend of mine, Michael Rubin, at Adobe describes this empowerment from technology as 'democratizing creativity.' I really like that expression.

This is what we are trying to do at Quid, to develop technology to give creative superpowers to a new generation of thinkers and creators.

S: Your most influential book and why

N: Jeez, don't get me started on this one! I read a lot, so this could be a long list. At various points, I would have said books by Hesse, Mo Yan, Murakami, Camus, Vonnegut, Chodron, Asimov and Orwell. They all seem to me to cut to something very core but also expansive about the human condition.

Right now I'm re-reading for the 50th time 'Everyday Zen' by Charlotte Joko Beck. I'm finding it more deeply affecting every time I read it, so I guess this is ultimately the most influential. It's basically a transcript of a bunch of Dharma lectures by Joko Beck, an American woman who took up Zen meditation in her 40s and developed a kind of indigenous American Zen. 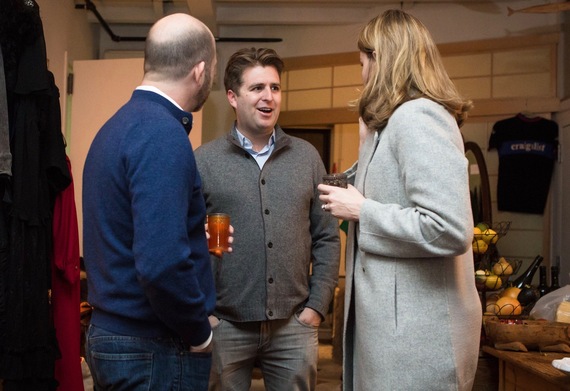 N: I think one of the good things about getting older is you get to know yourself a bit better. I used to punish myself by pushing all the time, but now I try and listen to my body and kind of live like a grandma: fresh veggies, time with the family, regular sleep, regular vacations.

The only 'hack' I employ is meditation. I try to mediate every day and go on a silent retreat from time to time. I don't really consider it a hack though as, to me, meditation is basically about becoming sane, about functioning moment-to-moment in reality. Although I'm constantly amazed by how hard that is.

S: What do people never ask you that you wish they did?

N: That's a really good question. In general, I'm amazed that people don't ask 'why?' more. I meet with a lot of VCs and investors and press these days and everyone asks about Quid's technology and customers and use cases and so on, which is great. But hardly anyone asks 'Why are you building this?', which I think is the most important question - the mission. It links back to what I was saying before about democratizing creativity.

S: You're a guest speaker at a college graduation ceremony. What are the four things you'll tell your audience?

N: As someone who barely graduated and has never been invited back to an alumni event, the audience should take this with a large pinch of salt.

i) Follow your passion and your instincts - What I mean by this is: If you are curious about Iran, go live in Iran. If you get deep meaning and fulfillment from drawing cartoons, draw cartoons. If you feel you have a book in you, write the book. The future is evolving so fast I really don't believe in trying to 'game the system' by catching the current wave. When I graduated from grad school, a bunch of my friends went into bond trading because it was the thing to do at the time but most have bounced out by now as they found it fundamentally boring. Besides, the debt desks are all cutting staff and pay as trading goes algorithmic and they deleverage.

ii) Stay curious and bury your ego - I believe there is no more positive force than curiosity, asking the basic 'How does that work?' or 'Why is that so?' question and then going really deep to figure it out. But figuring out something new can be so bruising to the ego. I recall sitting in my first few finance classes as someone who hadn't studied math past 10th grade and wanting to curl up and die. Then I moved from a high-paying New York job in a big prestigious firm to a little startup in San Francisco - these things were jarring, but only to the ego, and the payback has been worth a thousand times the pain.

iii) If you have it in you, get directly involved in public service - This horrible election cycle has probably been more of a turn-off than ever for folks considering heeding the call to serve their country, whether in a public servant or elected official position. But I truly believe this is the wrong response. We need the next generation of leaders to be better than the current generation, and that means the best, the brightest, the most honest people getting involved and winning key positions. This is the only way that the really big issues are going to get solved.

iv) Take care of yourself - Writing this makes me feel like an old man. I'm not even 40! My reflection is that when I was 21 I felt like everything needed to happen right now, and I gave very little thought to the future. Now I feel like life is really long and with healthcare and lifestyle advances we can be productive well into our 70s or 80s. We have the opportunity to make multiple substantial contributions throughout out life. On the other hand, every bit of abuse that I handed my body in my 20s is slowly but surely catching up on me.... You've been warned!