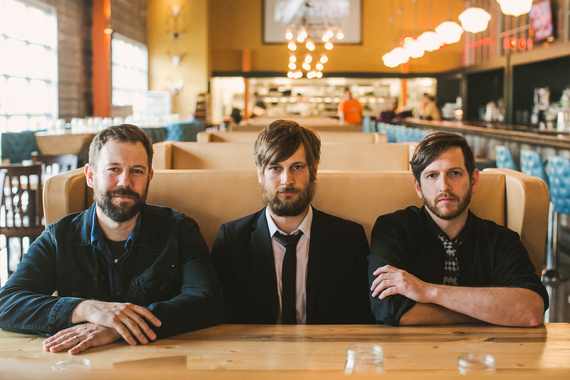 Odds are that you have heard the music of Quiet Company and did not even realize it. They have had music featured on reality shows but don't hold that against them. Their music is really much more thought provoking than the shows that they provide the soundtrack for.

Part of their alternative indie rock charm is that they have great lyrics. I mean, epically great lyrics. Lately, I have been listening to their new album, Transgressor. Every time I listen to the album, something new grabs my attention. Trust me, for something to really get my attention it has to be pretty good, if only because I'm so distracted by life in general.

Taylor Muse, the lead singer, took some time from his own distractions to answer a few of my questions.

I read that your manager provides vocals sometimes. How did that come to be?
They used to do like a choir. They played harmony. We haven't actually done that in a long time.

How did the band get their songs on so many TV shows?
We worked with different licensing companies that shopped that stuff. Some of them pay. Some didn't pay as much. There's this whole currency of exposure that people really of take advantage of. A lot of TV show stuff, like MTV, licenses your whole catalog to the company. Then you'll hear your song on some terrible reality show.

What keeps you grounded?
I don't think that I am. Nothing can keep me grounded. We have responsibilities, mortgages, children. I don't think anyone in the band has been in danger of not being grounded. We're all pretty even-keeled.

What has been the greatest opportunity that the band has had so far?
We've had some really good show opportunities. We played with Cheap Trick one time.

Do you prefer shows with large crowds or smaller shows?
Definitely larger. The more the merrier, as far as that is concerned.

When did you realize that you could sing?
I have yet to realize that. I think that my voice is utilitarian. I don't see myself as a really great singer. I've always kind of viewed myself as more of a songwriter. I don't think my voice is horrible. I always think about Neil Young.

Neil Young wouldn't say that he's an amazing singer but it doesn't stop him from being great.

I've tried to sing better within this last year. We just started taking vocal lessons. I'm trying to be a guy that really cares about singing well, as opposed to getting off stage and screaming through a set.

I was in choir when I was younger. So I've had that level of vocal training but it's different than being in a rock band.

What are your goals for the next year?
Yeah, for sure. We're going out on tour a lot. The goal is to sell a lot of records and make a lot fans. Just keep being able to do what we love to do, you know.