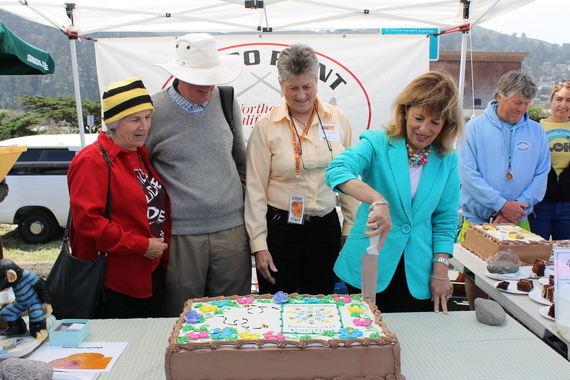 I celebrated the 45th Earth Day with the Pacifica Beach Coalition, a group that collects trash and restores habitat.

Forty-five years ago, rivers were on fire because of industrial pollution. Today our entire planet is on fire because of carbon pollution. 2014 was the hottest year on record. Temperatures over land and ocean surfaces were the highest since scientists started recording them in 1880. Strange weather has made headlines around the world. We've seen polar vortices and tornadoes in the Midwest, massive snowstorms on the East Coast, rapidly shrinking sea ice at the North and South poles, record hurricanes and cyclones over the Pacific and Indian Oceans, flooding in Asia, and extreme droughts in Africa and right here in the western states of the U.S. Scientists call this the "new normal" -- in a warming world we have to expect the unexpected.

But even in California, where we are used to a dry climate, we didn't expect four consecutive years of exceptional drought. Just a few weeks ago, on April 1, Governor Jerry Brown announced the lowest snowpack on record in California. He stood on a brown meadow in the Sierras instead of in five feet of snow.

Forty-five years ago, people were sick and dying from air and water pollution. They were fed up. Millions of protesters took to the streets to express their appreciation of the planet and demand its protection. One of the co-founders of Earth Day, then-Republican Congressman Pete McCloskey, says the movement resulted in the defeat of corrupt politicians and spurred a quarter-century of bipartisan environmental legislation.

In 1970, industrialization was at its height. Garbage was dumped into rivers and bays, sewage flowed straight into the ocean, and toxic chemicals from factories and leaded gasoline exhaust from cars were fouling the air. The Cuyahoga River in Ohio was so polluted that it caught on fire. Off the Santa Barbara coast one of the worst oil spills soiled miles of coastline and killed thousands of birds and fish.

Senator Gaylord Nelson of Wisconsin had witnessed the Santa Barbara oil spill and came up with the idea to combine the energy of the anti-Vietnam-War movement with public awareness about pollution in order to put environmental protection on the political agenda. He turned to Republican Congressman Pete McCloskey, who represented the San Francisco Peninsula, and to Denis Hayes, a young Stanford graduate and activist, to create a national teach-in on the environment. Hayes built up a large staff across the country and worked with thousands of universities, colleges and schools to promote the event. On April 22, 1970, 20 million Americans marched in the streets to protest against environmental ignorance and pollution.

The mood in the country was ripe for environmental protection and regulations. In the 1970 election, seven of 12 members of Congress with dismal environmental policy records, dubbed the "Dirty Dozen" by the Earth Day movement, lost their seats. Landmark environmental laws, including the Clean Air Act, Clean Water Act, Endangered Species Act, Marine Mammal Protection Act, and Estuary Protection Act, were signed by the Republican president, Richard Nixon.

Unfortunately, since the mid '90s, many members of Congress have spent their energy trying to tear down these protections. Right now, one of the big environmental fights in Washington is over whether water runs downhill, a blatant attempt to weaken the Clean Water Act. We must find a way to reignite bipartisan action to ensure that everyone has access to clean water, clean air and a livable environment.

For two decades we have failed to create an international treaty on climate change mitigation. In 1997, the U.S., one of the top two polluters in the world, didn't sign on to the Kyoto Protocol. Summits in Rio and Copenhagen ended with basically nothing. This year leaders from around the world will meet in Paris to negotiate an agreement that would cut greenhouse gas emissions and limit warming to 2 degrees Celsius above pre-industrial levels, a level scientists say is necessary to avert the worst effects of climate change.

We see the effects of climate change in California as we confront an ironic pair of threats: drought and flooding. The governor has mandated a 25-percent cut in water use on land because of the drought, yet we are surrounded by ocean water that will flood our land if we don't prepare for sea level rise. San Francisco and San Mateo counties, both of which I represent, are particularly vulnerable to sea level rise. The Bay has risen eight inches over the last century, and scientists expect it to rise at least another foot and a half by 2050. If we don't act, portions of Highway 101 and Silicon Valley will end up underwater. I've worked closely with state and local officials to coordinate a response to this threat and am pleased that the U.S. Army Corps of Engineers and the Coastal Conservancy are supporting our efforts. Collaboration and planning are essential to prepare for the future.

Sea level rise, ocean acidification, species extinctions, erratic weather events, decreased agricultural yields, harm to human health and lower worker productivity are real and costly consequences of climate change. It is past time that we reclaim the spirit of the original Earth Day and make 2015 a year of bipartisan action to preserve our natural resources and the health of our planet. We owe it to future generations.