This post was co-authored with Håvard Halland, Economist at the World Bank

In recent decades, Least Developed Countries (LDCs) have been using their natural-resources as collateral to access sources of finance for investment, countervailing the barriers they face when accessing conventional bank lending and capital markets. Depending on whom you ask, such financing models have been alternately vilified and sanctified in the global development debate. In an effort to not be categorical, we say here that it all depends. As we noted in a recent Economic Premise Note, the best way to understand resource-backed financing models is to assess them based on their structural characteristics and context.

In these times of diminishing availability of private long-term finance and reduced aid flows, LDCs are looking for alternatives to maintain and increase financing to build and upgrade infrastructure. Many of the LDCs that lack access to capital markets are also rich in natural resources, and as a result of resource-related investments have in fact been receiving more Foreign Direct Investment than other more advanced developing countries as a share of gross domestic product (Figure 1). FDI to Africa has quintupled since the turn of the millennium, from US$10 billion in 2000 to US$50 billion in 2012 (UNCTAD 2013).

So, one may ask, what kind of financing opportunities could result for infrastructure from the combination of natural resource abundance, governments' lack of capital market access, and weak governance environments? As it turns out, quite a few. Investors with a stomach for risk have invented financing models that provide these countries with a competitive edge. Additionally, LDCs are seeking to become more proactive with regard to productive investment of rents generated from extractives. 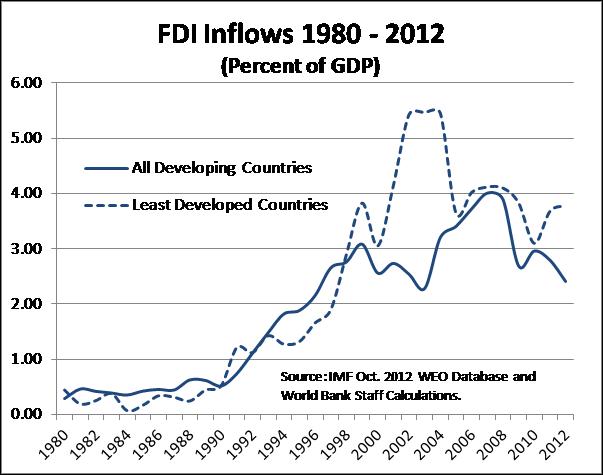 An unlikely candidate for financial innovation, Angola initially pioneered resource-backed models later refined in London and Beijing. In the 1980s and 90s, Angola's government had abundant promising or producing oil fields, and an expensive war to fund against Jonas Savimbi's UNITA rebels. At the same time, its creditworthiness was at rock bottom. Standard Chartered Bank, soon to be followed by several other Western banks, saw this as a business opportunity, and offered Angola an arrangement whereby loans were to be guaranteed by future oil revenues. By the end of the war in 2002, the Angolan government had taken out 48 oil-backed loans (Brautigam 2011).

Once the war was over, the devastated country needed rebuilding: enter China Exim Bank. In 2004, China Exim, in association with Chinese oil and construction companies, made a $1 billion offer to rebuild railways, roads and power plants in exchange for extraction rights to Angola's offshore oil fields.

Under this and similar Resources for Infrastructure (RfI) arrangements, a loan for current infrastructure construction is securitized against the net present value of a future revenue stream from oil or mineral extraction, adjusted for risk. Loan tranches are paid directly to the construction company to cover construction costs, while the oil or mining company makes the down payments to the financing institution, frequently with a lag of a decade or more. The RfI financing model was later used in several other African countries, predominantly by Chinese banks, but recently also by a Korean consortium led by Korea Exim Bank in DRC. Back-of-the-envelope estimates based on publically available information indicate that the value of signed RfI contracts in Africa to be at least US$40 billion, most likely higher, although it is unclear how many of these contracts have been fully implemented.

In parallel, and recognizing the need for macroeconomic and fiscal buffers against highly volatile resource revenue flows, several countries have recently established, or are in the process of establishing sovereign wealth funds (SWFs) funded from oil, gas and mining revenues. Several of these new SWFs have defined or are considering mandates that go beyond stabilization and intergenerational savings to fund investment in national infrastructure. Examples include the newly established Nigeria Sovereign Investment Authority, and its Nigeria Infrastructure Fund, as well as the Fundo Soberano de Angola, and a number of others under consideration.

Moving beyond the Resource Curse

There are major benefits of resource-backed financing models, such as resource-backed loans and RfI, to democratically elected governments, or even nondemocratic ones that need popular legitimacy. They allow these governments to provide a return to citizens while in office, and long before the extractive project is generating revenue or turning a profit. Additionally, RfI ensures that extracted resources are offset by the accumulation of a productive capital asset, rather than going to increased consumption, as has frequently happened in weak governance environments with signing bonuses and royalty revenues, or worse, disappear into private foreign bank accounts. If there is a perception that an SWF is likely to be raided by the next government in power, the current government may prefer the earmarking of funds to investment implicit in RfI, rather than saving in a SWF beyond what is necessary for stabilization.

The risks of resource-backed financing are nevertheless substantial. Resource-backed loans, as well as possible future resource-backed bond structures, may in weak governance contexts mortgage the nation's subsoil wealth without much productive investment to show for it. RfI can only bring full benefits if the government has the will and capacity to credibly negotiate the RfI contract based on proper valuation and competitive tendering processes. Infrastructure projects must be properly assessed, selected, monitored and maintained, and macro-fiscal stability and debt sustainability must be ensured. Failure to build capacity on the government side, and implement transparency, will likely result in low-quality, high-cost, badly selected, and poorly maintained infrastructure projects (Canuto and Cavallari, 2012).

When it comes to domestic investment by SWFs, the main risks arise from the double role of the government as the owner of the fund as well as ultimately being responsible for its investments. While these risks can be managed they cannot be completely eliminated. At the same time, potential advantages do exist. Taking advantage of the long-term horizon, a domestic SWF is in a position to offer a range of instruments to share risk and make potentially attractive projects commercially bankable. To minimize risk and maximize opportunities, domestic investments need to be screened primarily on the basis of financial returns, and crowding in rather than displacing private investors. Further, parliamentary oversight must be ensured by approval of the domestic investment envelope through the budget process, and the full independence of investment decisions must be ensured by applying accepted global standards for corporate governance. Partnerships with foreign SWFs or investment funds, with the home SWF as a minority investor would serve to reduce moral hazard problems, in addition to opening up investment decisions to external evaluation and adding to the expertise at the fund's disposal.

The bottom line here is that the success and failure of the much-debated resource-backed financing models will be determined not on the basis of categorical assessments of each model as "good" or "bad" for development outcomes. Instead, their deployment will vary in different country and institutional contexts, and on the institutional and procedural safeguards established to ensure proper governance. In the end, it all depends!