I love Thanksgiving. So do most Americans, ranking it as their second favorite holiday of the year after Christmas.

There is much to like about Thanksgiving. There's the concept of gratitude -- something we perpetually forget in our hectic day-to-day lives. There's the warmth of family -- gathering around the dinner table to laugh with our loved ones. And there's the secular appeal -- Americans of all faiths today celebrate Thanksgiving with equal enthusiasm.

But there is something we as a society should reconsider about Thanksgiving: the turkey. Around 46 million turkeys will be slaughtered in the U.S. for Thanksgiving this year, accounting for close to one-fifth of all those killed in the entire year. 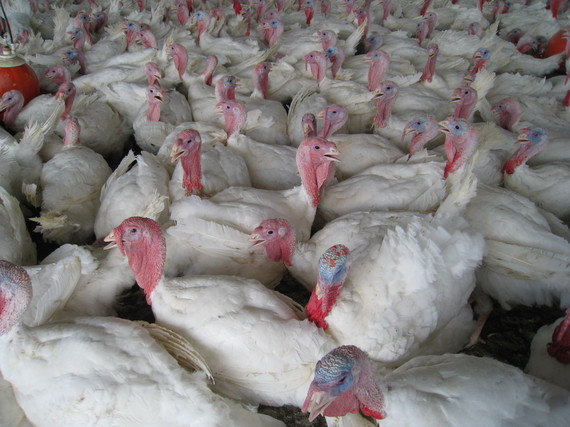 Almost nine out of 10 Americans eat a turkey at Thanksgiving, according to the National Turkey Federation. But most Americans do not stop to consider how their turkey was actually raised and killed.

I have investigated animal farms around the world, with an eye to improving animal welfare in the industry internationally. Among other farms, I have visited turkey operations. Confined in the thousands to stinking, ammonia-swamped warehouses, many turkeys today are genetically bred to grow so fast that their heart and legs can't keep pace with their ballooning bodies. Many suffer heart attacks and leg collapse.

As one turkey contract grower explained to me, "The body weight of turkeys increases 300 times between birth and slaughter...Their genetics are crazy."

Every year, the president of the United States ceremonially "pardons" a turkey, giving the animal a reprieve from slaughter. Thanksgiving is "one of the worst days of the year to be a turkey," President Obama jovially noted in his 2011 turkey pardon. He continued that Liberty, the turkey he pardoned, is probably "the luckiest bird on the face of the earth."

Not quite, Mr. President. Most pardoned turkeys tend to drop dead in under a year because of their grievous body structure.

Killing poses another ethical issue. I have witnessed a callous disregard of animal welfare at slaughter plants. In the United States, turkeys and chickens are not even protected under the federal Humane Methods of Slaughter Act, even though they constitute 97 percent of farm animals slaughtered every year.

A more subtle issue with slaughter is: How many Americans would eat a turkey at Thanksgiving if they had to kill it themselves? Not many, I imagine. This speaks positively of Americans, and is not the case with all cultures.

In early October of this year, 1.6 billion Muslims, or close to a quarter of the world population, celebrated Eid-al-Adha, the largest Islamic holiday of the year, with the "sacrifice" of 100 million cows, goats and sheep. Just as Thanksgiving is often called Turkey Day, Eid-al-Adha is often called Bakra Eid, which translates to Cow Feast or Goat Feast. While Eid slaughter is often decried as barbaric, Thanksgiving slaughter isn't, even though the only difference between the two is who wields the knife -- the consumer or the worker. Muslims tend to purchase the requisite cow, goat or sheep, and kill the animal themselves in their backyards; Americans purchase turkeys that were killed behind closed doors by largely Mexican, underpaid, exploited workers in American slaughter plants.

Thanksgiving is about bringing family together, and that fortunately has nothing to do with turkeys. The roots of Thanksgiving, in fact, lie in expressing gratitude for harvests of crops. That's right -- Thanksgiving is actually a harvest festival.

Let's have a Thanksgiving where we celebrate life over death and enjoy the bounty of the autumn harvest.

Sonia Faruqi is the author of Project Animal Farm, forthcoming in July 2015, and available for pre-order on Amazon. The book traces her journey investigating animal farms around the world.