For many years I had a poster of Mother Teresa that read, "Unless life is lived for others, it is not worthwhile." The holy woman from Calcutta was -- and still is -- someone whose life and work I admire greatly. I do my best to live according to her wise words, though I fall far short of her saintly standard. 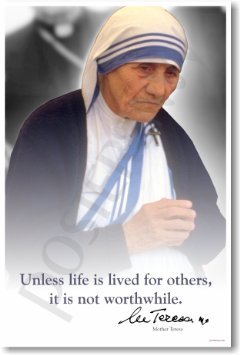 Her words came back to me recently when I read a short blog post, "Marriage Isn't for You" by Seth Adam Smith. The title came from wise words given to him by his father when Seth expressed some anxiety about getting married. In essence, his father told him to stop worrying about what he was going to get out of marriage and instead focus on what he planned to give to his marriage.

I love that. Seth is blessed indeed to have such a wise dad. This is wisdom for the ages, timeless teaching echoed throughout history by many wise men and women.

"The purpose of life is not to be happy," wrote poet, essayist, and lecturer Ralph Waldo Emerson. "It is to be useful, to be honorable, to be compassionate, to have some difference that you have lived and lived well."

"The best way to find yourself is to lose yourself in service of others," wrote India's spiritual and political leader Mahatma Gandhi.

"Service to others is the rent you pay for your room here on earth," said famed boxing legend Mohammed Ali.

First Lady and humanitarian Eleanor Roosevelt explained: "Since you get more joy out of giving joy to others, you should put a good deal of thought into the happiness that you are able to give."

Preacher and inspirational author Norman Vincent Peale went further: "When you become detached mentally from yourself and concentrate on helping other people with their difficulties, you will be able to cope with your own more effectively. Somehow, the act of self-giving is a personal power-releasing factor."

His Holiness the Dalia Lama adds his voice to the universal chorus: "Our prime purpose in this life is to help others."

And young diarist Anne Frank reminds us that "No one has ever become poor by giving."

Perhaps preacher and civil rights activist Martin Luther King Jr. said it best: "Life's most urgent question is: What are you doing for others?"

Today, with 65 years behind me, I peer ahead into the final third of my life and wonder, "What's next? How do I want to spend my final two or three decades?" The one thing I know for sure is that retirement isn't for me. Old age isn't for me. Being an old lady isn't for me. Because unless my life is lived for others, it is not worthwhile.

I want my old age to be about giving, not getting. Retirement isn't for me -- it's for the people I can serve, the friends and family I can help, and the younger generations I can teach. Now is the time for me to pass along all that has so generously been given to me.

"I now see that 'hanging on' is a fearful, needy, and clinging way to be in the world. But looking for 'what I want to give myself to' transforms everything. It's taking me to a place where I find energy, abundance, trust, and new life."

I love that. It reminds me of my all-time favorite book, "Man's Search for Meaning" by Viktor Frankl, in which he says: "Ultimately, man should not ask what the meaning of his life is, but rather must recognize that it is he who is asked. In a word, each man is questioned by life; and he can only answer to life by answering for his own life; to life he can only respond by being responsible."

In old age, in retirement, the most important question is: "What do I want to give myself to?"

Poet, playwright, musician, painter, and Nobel Laureate Rabindranath Tagore gives us the answer: "I slept and dreamt that life was joy. I awoke and saw that life was service. I acted and behold, service was joy." 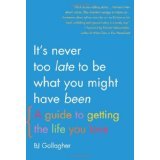 BJ Gallagher is a sociologist and author; her latest book is "It's Never Too Late to Be What You Might Have Been" (Viva Editions)