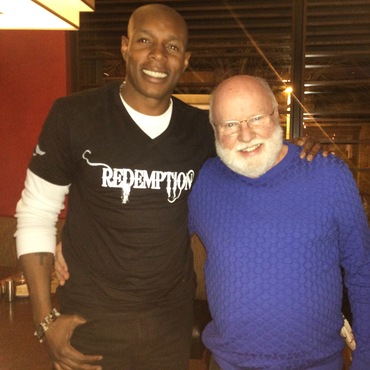 A few days ago I had the wonderful opportunity to spend a day with Richard Rohr. Our conversation from the moment he picked me up from the airport, was energizing and thought provoking. Rohr's demeanor is very calming and without the fear of shaming or blaming, it's pretty easy to talk to about anything. We discussed the institutional church, poverty, self-care, the contemplative life and many other issues. But one topic came up that I didn't anticipate, the issue of white privilege.

I've had conversations with white religious leaders about race and white privilege before but never with a contemplative Franciscan. Father Rohr expressed a desire to continue the dialogue after our visit and that's when I thought it would be a good idea to share his answers to a few questions. Here is a very brief bio on Richard Rohr followed by our conversation on white privilege.

Richard Rohr is an internationally known inspirational speaker and has published numerous recorded talks and books. He is a contributing editor and writer for Sojourners magazine and a contributor to Tikkun magazine and the Huffington Post. He has been a featured essayist on NPR's "This I Believe," and a guest of Oprah Winfrey on Super Soul Sunday. He often refers to his position as being on the "edge of the inside", as a prophetic place from which to challenge and encourage the Church.

RT: What does White privilege mean to you? How do you define it?

White privilege is largely hidden from our eyes if we are white. Why? Because it is structural instead of psychological, and we tend to interpret most things in personal, individual, and psychological ways. Since we do not consciously have racist attitudes or overt racist behavior, we kindly judge ourselves to be open minded, egalitarian, "liberal", and therefore surely not racist. Because we have never been on the other side, we largely do not recognize the structural access, the trust we think we deserve, the assumption that we always belong and do not have to earn our belonging, the "we set the tone" mood that we white folks live inside of--and take totally for granted and even naturally deserved. Only the outsider can spot all these attitudes in us. It is especially hidden in countries and all groupings where white people are the majority.

RT: Do you think you have benefited from white privilege? If so, how?

I would have never seen it if I had not been forced outside of my dominant white culture by travel, by working in the jail, by hearing stories from counselees, and frankly by making a complete fool of myself in so many social settings--most of which I had the freedom to avoid! And so recognition was slow in coming. I am not only white, but I am male, overeducated, clergy, a Catholic celibate, healthy, and American! I profited from white privilege on so many fronts that I had to misread the situation many, many times before I began to feel what others feel and see what others could clearly see. Many must have just rolled their eyes and hopefully forgiven me!

RT: I've observed that some white people working toward justice and the dismantling of white privilege are nonetheless biased and prone to making racial assumptions. We also see it in organizations with little to no cultural diversity on their staff or in senior leadership positions, but proclaim a message of inclusion and fairness.

What actions can people take to address and overcome their personal and organizational biases while working to dismantle the very privilege from which they benefit daily?

One problem here is the legitimate fear of tokenism. If and when you hire or invite someone who is not really qualified, does not have the ability to adjust to the culture of any group (whatever it is!), you are actually setting them up for disappointment, anger, communication issues, and possible failure and firing. Unless a group is clearly and patently committed to asking change of both sides (the dominant culture and the newly invited member), I have seen supposedly magnanimous hires and invitations almost totally backfire.

In other words, we must name the tensions, the unconscious assumptions, the possible needed changes in attitudes, behaviors, and we must help a group recognize both the necessity and the real work of change for the common good of society--up front.

People must be taught to see this as a matter of justice and truth and not just a matter of me being generous and charitable. Or whiteness and superiority is back in charge again, and the person in the minority position will surely feel patronized and not taken seriously as someone of dignity.

RT: Do you think the Bible has been used to perpetuate white privilege? If so, how?

As someone who has tried to teach the Scriptures for 45 years now, and in many countries and denominations, I am deeply aware of how the Bible has been almost entirely absorbed by cultural assumptions and agendas--wherever I go! (Not just in the USA). Is it Peter Drucker who says something to this effect "Culture eats ideology for lunch!" Christianity is merely an ideology except among genuinely transformed/converted people.

Jesus himself, who eschewed all power games (all three temptations in the desert are temptations to the misuse of power)--was made into Christ the King by Catholics, into a blond haired blue eyed capitalist by Protestants, into a teacher of obedience much more than love by all patriarchal groups; he is a banker in Switzerland, a policeman in Germany, and a businessman in the USA. The feminine side of God was almost not talked about. Just look at the evolution of Christian art, and how already by the Byzantine era we have made the humble crucified one into a "Pantocrator"-- punitive and judging from the rotunda and the very entranceway of many cathedrals.

In my opinion, "whiteness" loves order above all else (not love), and has used the Scriptures to enforce its version of order: Christendom itself, the Crusades, the Inquisition, the genocide of the Americas, slavery, apartheid, unjust voting rights and voting privileges, the non education of woman and blacks were all justified by the Bible, and most especially by Bible thumpers! Forgive me, but we Catholics eventually justified our non study of the Bible (which was terrible!) by pointing out what Protestants had done with it. The supposed medicine seemed to be a major part of the problem itself.

Let's be fair here too, because when minorities are in fact the majority in a country, they tend to take on the same imposition of order, obedience, and patriarchal attitudes of control that whiteness does. The problem is always the misuse of power, and it is just that the whites have historically appropriated the most power, but I have seen every other ethnic group abuse power too.

RT: How can the Bible be used to address and dismantle white privileges?

By being historically honest about the cultural, historical, and anthropological settings of every single Biblical story. Then it is again and again a revolutionary message and often counter cultural to our own assumptions. Frankly, it is dangerous to put the Bible into the hands of people who still worship their own group, their own country, their own denomination, or any other idolatry. They will always abuse it. The Dutch Masters painted all events in the life of Jesus inside of Holland's dress, furniture and atmosphere. Now we make Jesus into a Texas Republican or a moralistic Calvinist or Catholic. Poor Jesus.

RT: How can clergy teach and preach from the Bible to dismantle white privilege?

In short, we have to recognize that from Moses, to the prophets, to Job, to Jesus, the Biblical message is on the side of the powerless, whereas we have been reading it since Constantine in the 4th century to shore up power, money, and war. That distorted our message at the core.

RT: Is it possible to dismantle white privilege?

Evil is always incapable of critiquing itself. Evil depends upon disguise and tries to look like virtue. We have to fully cooperate in God's constant work, spoken so clearly in Mary's prayer (Luke 1:52) which is always "bringing down the mighty from their thrones and exalting the lowly". It is the de facto story of history, art, and drama. And we have to get in on the story.

RT: How can the contemplative tradition and meditation serve as tools to help people overcome White privilege?

Some form of contemplative practice is the only way (apart from great love and great suffering) to rewire people's minds and hearts. It is the only form of prayer that dips into the unconscious and changes people at deep levels--where all of the wounds, angers, and recognitions lie hidden. Prayer that is too verbal, too social, too external, too heady never changes people at the level where they really need to change. Only some form of prayer of quiet changes people for good and for others in any long term way. It sustains and deepens the short term wisdom we learn in great love and great suffering. Forgive me for making that an absolute statement, but I believe it from years of working with people.

RT: As a society, what do we have to gain from dismantling white privilege?

RT: If all people are viewed and treated equally, why do you think those who deny white privilege feel they are in danger of losing?

Power never surrenders without a fight. If your entire life has been to live unquestioned in your position of power--a power that was culturally given to you but you think you earned--there is almost no way you will give it up without major failure, suffering, humiliation, or defeat. The trouble is we cannot program that for other people. All we can do is stop shoring it up by our de facto idolization of money, possessions, power positions, superficial entertainment, the idolization of celebrities and athletes, the war economy, which all depend on our common enthrallment with being on top. As long as all of us really want to be on top, and would do the same privileged things if we could get there, there will never be an actual love of equality. This challenges all of us to change and not just those folks who temporarily are "on the top".
Jesus' basic social agenda was simple living, humility, and love of neighbor. We all have to live this way ourselves, and from that position, God can do God's work rather easily.

RT: What do you think perpetuates and sustains white privilege?

Self chosen illusion and denial, softened and sustained by too easy comfort

RT: Do you have any closing thoughts you want readers to reflect on?

I had naively thought racism was behind us when I was educated in the 1960s, but now I think much clearer and more honest. Education about white privilege is the best doorway to help those of us who think we are not racists--to recognize that structurally and often unconsciously we still are. Our easy advancement was too often at the cost of other's not advancing at all.

To learn more about Richard Rohr and the work of the Center for Action and Contemplation check out https://cac.org