Who, you say? Rory Stewart? Never heard of him.

Okay, I'm getting ahead of myself. Yes, David Cameron, the Tory leader, looks pretty certain to win the next election, probably to be called for this May. And yes, Stewart is not now in government, and in fact has never even stood for election. And he just turned 37. So what's with all these bold predictions? 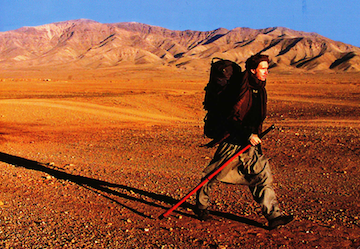 Rory Stewart walking across Afghanistan in 2002

Well, Stewart will soon be in government. In October he was selected by the Conservative party (from over 300 applicants) to stand for the "safe" House of Commons seat in Penrith and the Border. This constituency, in the northwest county of Cumbria and just below the Scottish border, has been represented by Tories for decades -- even during Labor landslides. So going from candidate to M.P. appears to be a sure thing. But what about the leap from M.P. to P.M.? Let's see.

Dinner at the Palace -- It all began for me six weeks ago at an event in London that Donna and I attended. Oh, by the way, the event was at Buckingham Palace (just to drop a name). The dinner for two hundred was hosted by Prince Charles for the Council of the Prince's Charities, a group of 20 international not-for-profit organizations that the Prince of Wales founded and supports. 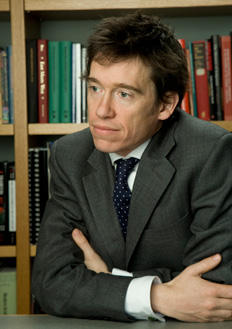 During cocktails in the Throne Room, I was introduced to a young man with whom I conversed for a few minutes about a wide variety of issues - international, political, educational and philanthropic. I couldn't help notice how knowledgeable, conversant, and charming this man was. He said his name was Rory Stewart. It was a name that meant nothing to me at the time. Later, at the conclusion of a most elegant dinner in the Queen's Gallery, Prince Charles introduced the speaker of the evening. To my surprise, it was this same young man I had chatted with during cocktails.

The Dinner Speaker -- Mr. Stewart's talk focused on Afghanistan, but not on the war-related issues you read about in the media. Instead he spoke of his two years living in Kabul as chief executive of the Turquoise Mountain Foundation, a not-for-profit founded by Prince Charles. He talked about the regeneration of the historic commercial center of Kabul, where Turquoise has restored over 50 buildings, created an institute to train women and men in traditional crafts, helped businesses to export, installed drainage and water supplies, established a clinic in primary school and promoted Afghan culture through international exhibitions. Stewart spoke with eloquence, humor and a sense of proud achievement at what had been accomplished in a strife-torn country.

Who is this guy? That was the question I asked after dinner of my British tablemates and others in attendance. To my surprise, a reply that I heard more than once was, "He'll be Prime Minister someday." I was floored. A thirty-something being touted as a future prime minister by some fairly astute observers of the political scene? I then decided to look further into this new political phenom.

Stewart was born in Hong Kong in 1973 of Scottish parents, grew up in Malaysia and Scotland, attended Eton and Baillol College, Oxford. While a student at Oxford, he tutored Princes William and Harry, where his talents clearly came to the attention of their father. After graduation he served as an officer in the British Army. Later, he worked for the British diplomatic service in Indonesia, Montenegro, and elsewhere. He subsequently became deputy governor (at the age of 29) of the two Iraqi provinces under the control of the British. After two years of running the Turquoise Mountain Foundation, he was appointed director of the Carr Center for Human Rights Policy at Harvard's Kennedy School of Government.

In my quest to learn more about Stewart, I just read the book. It was a fascinating read, not least of which for the insights it provided into his curiosity, energy, and ability to coexist with alien and often hostile societies. Amusingly, the book ends with his return home: a flight to London, train ride to Dunblane, Scotland, and then, for the last 12 miles, a walk home.

Stewart on Afghanistan In the last four years, Stewart has written on the politics and hostilities in Afghanistan. In fact, he has published so many articles and op-ed pieces that I'm embarrassed to say that I had not previously known of him. I've since tried to make up for that. In the meantime, if you wish to learn more, you can get up-to-speed in pieces in the

Telegraph -- A New Kind of Tory
Times of London Online-- My Long March to be a Tory MP
New Republic -- The T.E. Lawrence of Afghanistan
Time -- How to Save Afghanistan
Bill Moyers Journal -- A video interview with Lynn Sherr

Not to mention many more discoverable from a Web search, including a useful Wikipediabiography.

But if there's one must piece of reading, it is his just-published essay in the January 14 issue of the New York Review of Books. It's long - 5751 words - but well worth attacking.

It doesn't do justice to the article for me to try to summarize it, but here's the 38-word essence of what he's saying: Neither a surge nor a full pullout is the right solution for Afghanistan. Each is fatally flawed. Instead, a modest-size long-term presence by the West is the solution that will best satisfy both Afghan and Western interests.

Here are a few excerpts:

On the story thus far: "Eight years later this seems a tragic fantasy. Frustrated by lack of progress, the US and its allies have oscillated giddily between contradictory policies. The British government that once championed more generous budgetary support for the Kabul government now portrays it as corrupt, semi-criminal, ineffective, and illegitimate. 'Warlords' such as Gul Agha Shirzai, who we once demonized, are now tolerated or even praised, and are almost certain to be given good positions in the new Karzai government. We armed militias in 2001, disarmed them through a demobilization program in 2003, and rearmed them again in 2006 as community defense forces. We allowed local autonomy in 2001, pushed for a strong central government in 2003, and returned to decentralization in 2006. First we tolerated opium crops; then we proposed to eradicate them through aerial spraying; now we expect to live with opium production for decades."

"Obama should not have requested more troops because doing so intensifies opposition to the war in the US and Europe and accelerates the pace of withdrawal demanded by political pressures at home. To keep domestic consent for a long engagement we need to limit troop numbers and in particular limit our casualties. The surge is a Mephistophelian bargain, in which the President has gained force but lost time."

"The date of withdrawal should be recast as a time for reduction to a lighter, more sustainable, and more permanent presence. This is what the administration began to do in the days following the speech. As National Security Adviser General James Jones said, 'That date is a ramp rather than a cliff.' And as Hillary Clinton said in her congressional testimony on December 3, their real aim should be to 'develop a long-term sustainable relationship with Afghanistan and Pakistan so that we do not repeat the mistakes of the past, primarily our abandonment of that region.' "

On maintaining a long-term presence:

"A more realistic, affordable, and therefore sustainable presence would not make Afghanistan stable or predictable. It would be merely a small if necessary part of an Afghan political strategy. The US and its allies would only moderate, influence, and fund a strategy shaped and led by Afghans themselves. The aim would be to knit together different Afghan interests and allegiances sensitively enough to avoid alienating independent local groups, consistently enough to regain their trust, and robustly enough to restore the security and justice that Afghans demand and deserve from a national government.

"What would this look like in practice? Probably a mess. It might involve a tricky coalition of people we refer to, respectively, as Islamists, progressive civil society, terrorists, warlords, learned technocrats, and village chiefs. Under a notionally democratic constitutional structure, it could be a rickety experiment with systems that might, like Afghanistan's neighbors, include strong elements of religious or military rule. There is no way to predict what the Taliban might become or what authority a national government in Kabul could regain. Civil war would remain a possibility. But an intelligent, long-term, and tolerant partnership with the United States could reduce the likelihood of civil war and increase the likelihood of a political settlement. This is hardly the stuff of sound bites and political slogans. But it would be better for everyone than boom and bust, surge and flight. With the right patient leadership, a political strategy could leave Afghanistan in twenty years' time more prosperous, stable, and humane than it is today. That would be excellent for Afghans and good for the world."


And as for Rory Stewart? His perceptive, pragmatic and original views of handling many of the world's hot spots. His years of living and working and governing in Iraq and Afghanistan. His familiarity with languages of South Asia and the Middle East (not to mention Indonesia and the Balkans). His serving in the British Army. His academic credentials and professorship. His establishing and running of a successful operation in Kabul. His authoring two books and prolific publishing of political essays. And his unflagging energy. Altogether, not a bad résumé for one with higher - much higher - political aspirations.

So here is a possible, and not completely incredulous, Rory Stewart timeline:

And remember, you heard it here first.