“I always believed man doesn't have dominion over wildlife... instead, man has a responsibility to take care of all our fellow travelers on this earth.” -- Dayton O. Hyde

Suzanne Mitchell's directorial debut, the documentary Running Wild: The Life of Dayton O. Hyde, will premiere on Saturday, January 19, at the 2013 Slamdance Film Festival in Park City, Utah. The film’s subject is an 87-year-old cowboy poet who has dedicated his life to saving wild horses on the land of the American West. In the late 1980s, Hyde founded the Black Hills Wild Horse Sanctuary in Hot Springs, South Dakota, which has grown into a 12,000-acre refuge where wild mustangs are allowed to run free, safe from the dangers of civilization. 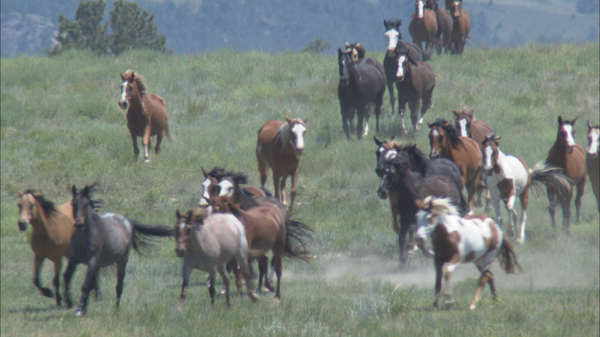 Running Wild is a starkly beautiful film, with majestic shots of the sanctuary in South Dakota, the Yamsi Ranch in western Oregon, and Hyde's family home in northern Michigan. At the same time, Hyde’s story is Forrest Gump-like in its scope: from WWII to the rodeo (where he clowned, fought bulls, and took photographs for Life magazine), from single-handedly saving sand hill cranes from extinction to protecting the sacred land of the Lakota Sioux from uranium mining, this man has seen and done it all.

For director Suzanne Mitchell, Running Wild has been a passion project; she’s been filming Hyde for over a decade, charting his course and uncovering his many layers. For almost as long, she’s known she needed an earthy score to complement her imagery, and she found a musical partner in San Diego singer-songwriter Steve Poltz.

In a recent interview, Poltz described the process of creating his first soundtrack and reflected on how he was inspired both by Hyde and by the wild landscape of South Dakota. 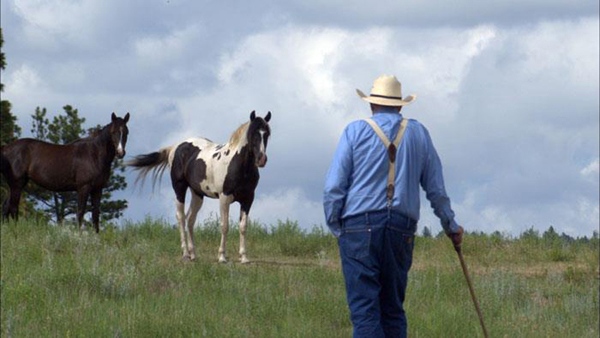 Kristin McCracken: So how do you know Suzanne?

Steve Poltz: About 10 or 11 years ago, Suzanne heard me on WFUV, out of Fordham University; I was being interviewed on a morning show. I was in the middle of a tour -- and she heard me, and thought I was funny, I guess. So she came to a show, and she told me, “I have this film I'm working on. And I want you to write songs for it.” I said, “All right.” And she said, “But I’m still working on it.”

Later on, she came on the road with me to do some filming. She was thinking about doing a sort of reality show, maybe, about what it was like to be a musician on the road. We became friends, and I got to know her and her family, and then I’d always stay at their apartment in New York City. They’re like family to me now.

KMc: And that was all from hearing you on the radio!

That’s how she is, though -- she follows a hunch. Without a doubt, she is one of the most driven people I've ever met. And when she wants to get something done, look out. She’s a force of nature. 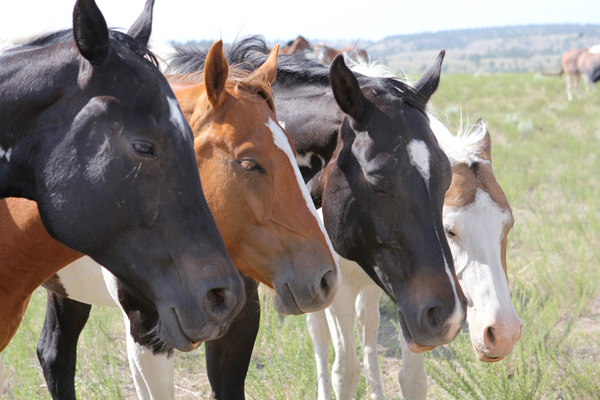 KMc: Did you know anything about Dayton Hyde before you met Suzanne? Or did you have any connection to horses?

Steve Poltz: No, I knew nothing. I mean, I’m interested in everything -- I find film and art and nature very interesting; I have a natural curiosity. So when she started telling me about Dayton, I looked the guy up, and read some of his stuff, and I got excited. And sure enough, she asked me to do the soundtrack.

KMc: Had you ever done a soundtrack before?

Steve Poltz: No, I’d had songs in movies, and on TV shows, but I’d never written specifically for a film. I make my living on the road -- I'm out nine or 10 months of the year. I’m gone all the time. I’m a true troubadour. I play in Australia, England, Scotland, Wales, Canada, and all over the U.S. I work hard, but I love it.

KMc: Suzanne has been working on the film for ten years. Did she show you stuff along the way?

Steve Poltz: She did. And then she flew me out to meet Dayton. I went to South Dakota, and got to spend a couple of nights around him at the Sanctuary, get a feel for him, and learn that his nickname was Hawk.

KMc: Tell me about meeting Dayton. There's something about seeing people who know what their life's mission is -- their purpose, in the strongest sense. It's just so moving.

Steve Poltz: He’s such a big hulking figure of a man -- the way he walks, and the way he talks, it’s almost like he’s this John Wayne, mixed with an environmentalist.

And then the fact that he was Slim Pickens’ best friend? I love Slim Pickens! The pictures he took for Life magazine? And he was a rodeo clown, and he’s always loved horses. That was always his sort of raison d’etre, to help the horses out and give them a place to run wild.

So when I met him, he was this legend -- I already knew so much about him, and he lived up to it! And I discovered even more history -- I mean, the fact that he went bowling with Joe Louis, the Brown Bomber?! They were in WWII together, in Germany, I think. Dayton was telling me this story about how Joe Louis said, “Hey, you want to go bowling?” Can you imagine?

But when I met him, it was funny -- I thought I’d get to go out for this steak dinner with this cowboy, and I was all excited. But instead, we went to a Chinese buffet. [laughs] Like, a really crappy Chinese buffet, with extra MSG.

Steve Poltz: Yeah, in South Dakota, which is not exactly known for good food. This was the one Chinese restaurant in town, and the lady in there knew him, and she was just ribbing him; they were flipping each other shit back and forth. It was just so what I did not expect. [laughs]

Meeting him, I was riveted, just listening to him talk, and he let me read his poems to him. He wanted me to hear some of his stuff, and he liked my voice reading his poems. It was really cool, hanging with him. I sat and played him songs on the guitar. He's a great subject -- now that he’s in the twilight of his life, it’s neat this film is being made to honor him.

KMc: And what about the Sanctuary?

Steve Poltz: It was beautiful. Man. He took me to see all the horses, and they went running by me, and the ground shook like it was an earthquake. It was very inspiring; it made me want to write for the film. It was a good move on her part, getting me out there.

KMc: Had you already written the closing credits song, “A Song for Hawk?” Or did you meet him to get inspiration?

Steve Poltz: No! I didn’t do a lot of the writing for the film until I met him, until I went out there and got a feel for the land and saw everything. But I’m a quick worker. And I can write anywhere.

Suzanne would send the clips of the film to me as she was getting them in. I would sit and watch, and then I would write to the film, coming up with a melody on the guitar; there are a lot of finger-picking parts. I would create what I call mood music, and then email them the tracks and ask, “How does this sound?” And they would say, “Darker.” Or, “Lighter.” Then I would go back to the drawing board.

Eventually, Suzanne and I met up in Austin, got a group of musicians together, and a really good guy with a great studio, and finished the soundtrack. And here we are! For me, it was super fun -- it was like playtime -- because I like to make songs up. It was a challenge that I was really into, and I’d like to do it again sometime. This experience opened up a whole new opportunity -- it really gave me the confidence that I could do this.

KMc: Will it be on iTunes?

Steve Poltz: In the coming months, new songs will be released as singles from the soundtrack on iTunes; can't wait for everyone to hear it! It’s really been a dream come true to be involved with this film. And to get into the Slamdance Film Festival is really big news -- it's amazing. I’ll be going to the festival, and performing at a party celebrating the movie. I can’t wait!

Suzanne and her Running Wild team really believe in Dayton O. Hyde, and in his story. She thought it would be compelling enough to get people to take notice and perhaps make a difference on this planet, in some small way. And I think she’s right.

“I never have turned down an adventure, and there are a lot of stories in my life yet untold.” -- Dayton O. Hyde

Running Wild: The Life of Dayton O. Hyde will premiere at the 2013 Slamdance Film Festival on January 19. Find tickets.