WASHINGTON -- The aftermath of school shootings is now all too familiar. The shock of the breaking news, the scenes of school evacuations, the ensuing political debate and the inevitable inaction. And for Ed Burke, the wave of new customers.

As CEO of the Massachusetts-based company Bullet Blocker, Burke sells one of the hotter goods in the body armor industry: bulletproof backpacks. And though he doesn't revel in the fact that business tends to boom after school shootings, he sees his company as providing a service for increasingly nervous parents.

"Business is growing unfortunately due to all the things happening in the country," Burke said.

The regularity of school shootings in America has set off a multi-directional reaction. Politicians have sought to respond with legislation. In some states, reforms have succeeded in passing. Federally, they have not, much to the chagrin of gun-control advocates.

"My biggest frustration so far is the fact that this society has not been willing to take some basic steps to keep guns out of the hands of people who can do just unbelievable damage," President Barack Obama vented during a recent town hall hosted by Tumblr. "We're the only developed country on earth where this happens."

Where politics has failed, business has stepped in, taking advantage of legislative inertia.

Bullet Blocker's co-founder, Joe Curran, built his first bulletproof backpack for his two kids after the mass shooting at Columbine High School in 1999. He realized the commercial potential, and began manufacturing backpacks and other school safety products for a wider audience. Today, Bullet Blocker produces iPad cases, notebooks, and school bag survival kits ($400 -- advertised as a "great self contained kit to augment the reaction plans for school lock downs").

The company has averaged 35 to 40 percent growth each year, Burke said. Last year, it grew by more than 50 percent. And when school shootings happen, like the one that took place last week in Oregon, interest spikes further.

"We had quite a few requests today," said Burke, speaking hours after news of that shooting broke. "There is growing awareness of the violence that is happening in society. People say, 'Geez this is happening all over, how do we protect ourselves?'" 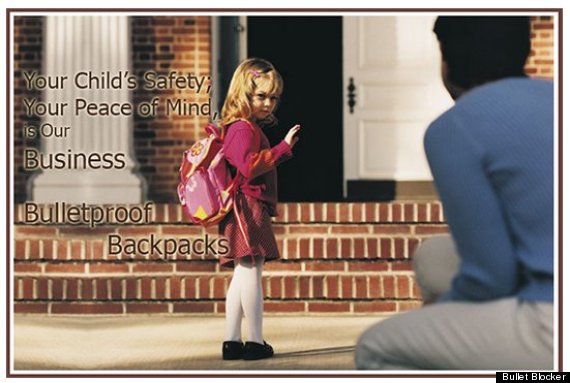 The fortification of schools and students is no longer a function of the paranoid parent or the besieged school district. Dr. Christopher Robbins, an associate professor at Eastern Michigan University, highlighted the movement in his 2008 book Expelling Hope: The Assault on Youth and the Militarization of Schooling. The security industry, he wrote, "cultivated a boom market" in the form of public schools.

"We don't like kids getting shot, but we don't do anything about gun control," Robbins told The Huffington Post. "We look at what might be the most efficient fix or the most expedient fix, which might not be the most effective fix.

"The security industry is well-positioned to provide that fix," Robbins added. "It becomes a self-repeating cycle. With each event, there's some new proposal, there's ever new technology."

The bulletproof school supply industry hasn't gone mainstream just yet. The majority of commerce takes place online, though several companies interviewed for this article said they were hoping to break into retail markets soon.

Kenneth Trump, president of the security consulting firm National School Safety and Security Services, said that the market for these protective products is expanding with each new school shooting. However, he said, in his opinion the products aren't particularly useful.

Safety equipment manufacturers recognize that bulletproof backpacks are insufficient for that very reason -- they can't offer complete protection. But instead of downplaying their product, they've built others to supplement it.

Becky Xheka, the chief financial officer of security accessory maker Blue Stone Safety, said that her company has been selling bulletproof inserts rather than bulletproof bags, precisely because they are cheaper (thus can be purchased in multiples) and can be transferred to briefcases and binders.

Teachers, she said, store the Blue Stone inserts in their desks because they are prohibited from carrying weapons at school. A small panel a little bigger than a piece of copy paper starts at $115. A larger version costs $215. 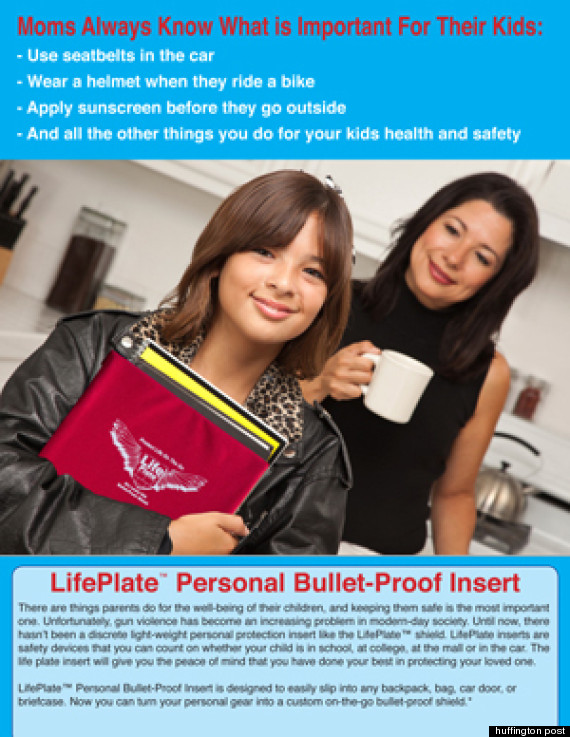 A bulletproof insert for school binders

"It takes no pleasure for me ... to do this, but someone has to protect these children," she said. "Parents are not familiar with body armor. They shouldn't be. But unfortunately in today's day and age, the kids need some form of protection."

Tests on a different brand of bulletproof panels, from the maker BulletSafe, have shown them to withstand several gun shots. However, the panels weaken if multiple shots are fired in roughly the same place.

"The industry is now going more towards hard armor," Scott said. "They are seeing that the world is getting out of hand. Pistol protection is not enough. Now people want rifle protection."

But plates are just one component. In addition to stronger products, consumers want more surface area protected. Burke said that clothing has become one of Bullet Blocker's most popular items: from bulletproof suit jackets to nylon jackets for kids ($750).

Armour Wear even has a patent on a multi-paneled cup that can protect a person's crotch from a bullet, Scott said. The company is planning to put 2,500 pairs of the bulletproof underwear on the market next month.

"The reality of the matter is you are most likely to survive a shot to the genitals," he said. "But your quality of life goes way down. Why live at that point?" 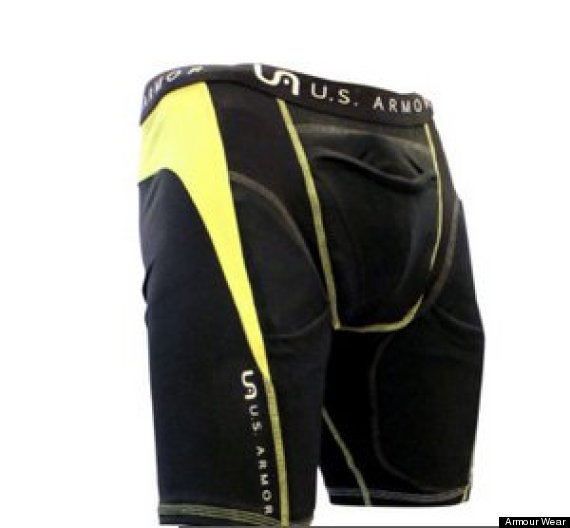 Parents and genitalia-minded men aren't the only consumers. Even schools themselves are devoting more of their budgets to bulletproof products. School districts in Maryland, Virginia and Minnesota have all started using bulletproof whiteboards, according to a 2013 story in School Construction News. Teachers there were given "two-hour training" seminars "conducted by retired secret service agents" in order to figure out how to properly use them, School Construction News reported.

The managing editor of that paper, Torrey Sims, said that the fortification trend picked up steam with Sandy Hook. Mother Jones reported at the time on the same upswing in interest. Today, Sims said, outfitting schools with advanced safety measures has become so prevalent that her paper created a new section just to cover the developments. Though the price tag for products can be high, Sims said that for many administrators, "budget isn't really a concern."

Eager to help their brand in the new market, some companies are now lowering costs or connecting with schools in other ways. After the Oregon shooting, Scott cut the price of his backpack inserts. STANLEY Security, a division of Stanley Black & Decker, organized a "Together for Safer Schools" competition in 2013 to award a total of $500,000 in grant money to a winning school and three runners-up that received the most votes in an online contest. More than 1,000 schools participated, and nearly 2 million people voted.

Ken Teifer, a STANLEY vice president and the company's K-12 education security leader, was on hand to award a Miami elementary school one of the $100,000 prizes for runners-up. When he arrived, he said, the school rolled out the red carpet -- reserving parking spaces for the company and displaying a thank-you message on the school's electronic sign. During the award ceremony, the school's chorus performed.

"It probably was one of the best events that I went to in my working career," Teifer said.

Administrators from other winning schools burst into tears when they received the news that they were getting money for more safety products, a STANLEY spokesperson said.

The money went to everything from "intruder locks on the classroom doors so they can lock themselves from the inside" to visitor management systems to track who is coming in and out of schools, Teifer said.

Pioneer Elementary in Auburn, Washington, was a $100,000 runner-up winner. The school's principal, Debra Gary, decided to enter the contest after Sandy Hook, and she made videos and sent Get Out The Vote emails in hopes of getting the funds. When word came back that they had won a grant, she was in disbelief.

"I was fighting my emotions and my tears," Gary said. "It really was a battle for us to make this happen for our kids in our community."

The money, Gary said, will go towards a surveillance system and an enhanced door locking system.