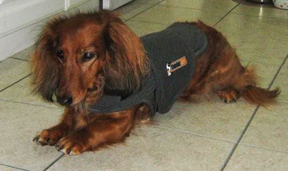 Rapunzel in her Thundershirt

When I first saw the segment on the local New York news about a drug-free solution for dog anxiety, I thought that maybe there was a cure in sight for my dachshund's 11-year ordeal. So did the crowd of folks familiar with her woes. Immediately I began fielding calls about the Thundershirt, a fabric wrap that uses deep pressure to create a calming effect on animals.

It was a new approach. I had certainly tried plenty -- from a raw food diet to Prozac to behavior modification. The promotional material underscored that "over 15,000,000 dogs suffer from anxiety in the United States alone." In fact, 50 percent of dogs with anxiety disorders are left to suffer as a result of time and financial constraints. Still looking for solutions, I was on board to learn more.

I immediately contacted the creator, Phil Blizzard, to get the background of the shirt's evolution. He related the story of his 50-pound dog, who was reactive to thunderstorm noise. Trips to the vet, sedatives, and a desensitization program with recorded storm sounds were attempted options. Yet every time there was a noisy downpour, the dog would jump up on his chest. Blizzard knew that he was treating the symptoms and not the root cause. The untenable strategy became all too apparent when his medicated dog jumped off the bed and hurt his leg.

A friend suggested that he try a tight wrap -- like swaddling a baby. Blizzard told me, "It was like flipping a switch. The shaking went away totally and the dog laid down." The Thundershirt evolved from there. Blizzard conducted a survey that showed the shirt could be effective for a range of fear and anxiety issues. A year later, in 2009, the Thundershirt debuted at the Vet Trade Show in Seattle. Veterinarians snapped them up.

I got the grey flannel style in my dog Rapunzel's size. She started off wearing it while I was still in the apartment. I gave her chew treats to build an association with a positive experience. She seemed calmer when the new neighbor's puppy walked by, and less insistent on barking to announce that the hallway was hers alone. Meanwhile, I conducted an informal study when I saw dogs on the street wearing the shirt. A 7-year-old Wheaten Terrier had overcome noise and car phobias through its use. A neighbor in my building informed me that one of her dogs was "terrified of thunderstorms, shaking uncontrollably," along with pacing and door scratching. Since using the Thundershirt, her dog "no longer pawed crazily at doors." She believed that the Thundershirt had "definitely mellowed" her dog's reaction.

I was ready to put it to the test. With a Kong stuffed with peanut butter, music playing, and the recorder on, I left for a 20-minute errand. When I returned and got off of the elevator, things were quiet. I walked in elated. The tape of my absence told a different story. Within 60 seconds, Rapunzel was off into an aria of high-pitched barking that reflected a distinct hysterical tone. I touched base with Blizzard. "Separation anxiety is probably the toughest," he said. "Dogs are complicated social creatures." Apparently the Thundershirt was working to ameliorate Obsessive Compulsive Disorder in spinning Beagles, but Rapunzel's first time out was not a success. Blizzard encouraged me not to give up and to continue the use of the shirt. It's now part of her daily routine.

Geared up to see if I could combine the Thundershirt with new insights, I decided to go back to one of my earliest avenues of exploration -- the animal communicator. I spoke with two women doing work in the field.

Edna Massi, who by day is a Licensed Mental Health Counselor, became involved with energy work 25 years ago -- and with animals a decade ago. She is holistically oriented and examines the spiritual, emotional, and physical aspects of an animal's situation. "You have to look at everything," she told me. Massi does a reading based on an animal's name, age, breed, and problem. She connects with the animal's energy. "We telepath," she said. "I'm like a translator." When I discussed my dog's separation anxiety, she suggested L-Troptophan from Lucky Vitamins. It's Pharma-grade serotonin (one capsule). For Massi, medication is a last resort. She agrees with Blizzard that it does not resolve "where the problem is coming from."

Gretchen Kunz asked me to send her a photo of Rapunzel before we conversed. She equated her process to "tuning into the frequency on a radio." A trained veterinarian technician, Kunz first rules out any physical issues. She sees her role as working to understand where the animal is coming from. "Animals need our support and guidance," she told me.

We spoke after she had communicated with Rapunzel. Kunz informed me that Rapunzel's anxiety pre-dated me. "She was born very sensitive. As a puppy, she felt that she didn't get enough attention." Her dew claws (since removed) made her feel like "less of a favorite." Kunz said, "She's a low-confidence dog, quicker to assume that she is doing something wrong or is not liked." Kunz also suggested that Rapunzel might have been moved around more than the breeder had revealed to me.

Kunz clarified certain of Rapunzel's troubling behaviors, such as her urinating in my office space. She told me it was a "stress-relieving" activity for the dog, a self-comforting mechanism that made it easier to cope with my absence. Kunz described a continuous loop of Rapunzel wanting "to be good," but being overwhelmed "by the need to be safe." Once I was able to get a better comprehension of the dog's psychology, I could troubleshoot with more understanding. Kunz believed that the situation could be improved and had heard "really good things about the Thundershirt." She supported the idea of getting dogs away from their emotional state and into a connection with their bodies.

Kunz gave me a list of pointers that I have started to employ:

• Use a desensitizing cue like, "I'll be right back."
• Don't make a big deal of coming and going.
• Give your dog a good walk in the morning as a routine to walk off some of her energy.
• Get someone in to walk your dog to break the co-dependency bond and take pressure off
the relationship.
• Consider the supplement Anxitane, an amino acid that can be used daily with no side
effects.
• Use the enzymatic cleaner Fizzion to dissolve the smell of urine in places that you don't
want repeated urinating.

The goal was to start conservatively, escalate up, and see what worked. "Remember," Kunz said, "It's like treating a person with emotion issues." After 11 years, we had both gotten into certain habits, but Kunz was optimistic that "things could be improved."

So it's back to square one -- and a back-up babysitter for the June wedding I am attending.