I hate to sound pessimistic, but the Arab world's increasingly disastrous status leaves very little room for positivity. After all, what else could be said of the devastating wars tearing apart Iraq, Syria, Libya and Yemen, a humiliating occupation in Palestine, severe divisions and intense corruption and unrest in Lebanon, Egypt and Sudan?

Obviously, such a situation doesn't come without its own aftermath; the catastrophe in Syria alone has produced 12 million refugees who -- let's admit it -- are unlikely to ever stand a chance to go back home in the near future. (According to former U.N. Emergency Relief Coordinator Valerie Amos, a displaced person will remain displaced for 17 years on average.)

On top of this, the sharp decline in oil prices has resulted in the introduction of austerity measures and subsidies being cut in the wealthier, more stable Gulf countries. While most GCC states are still in a relatively good situation, thanks to numerous foreign investments, economic diversification and massive reserves put aside when oil prices were at their peak, many are -- for the first time -- having to deal with new realities, such as unsubsidized petrol and meat prices.

Furthermore, the region is also plagued with high illiteracy and unemployment rates mainly due to decades of corruption and bad governance. 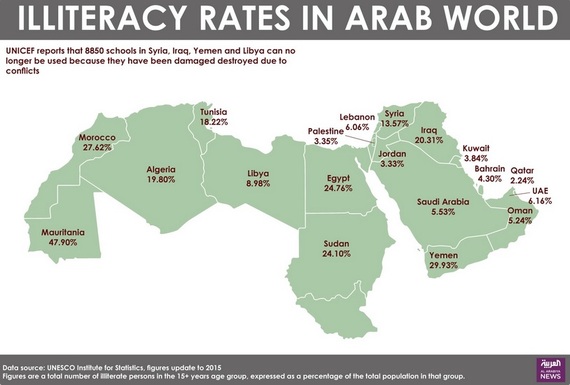 Then you have the issue of terrorism and violent extremism (which naturally flourishes in turbulent environments, such as the ones described above). Albeit a global phenomenon, our region is suffering the most and in recent years, we have been faced by a new reality on the ground: a "wannabe" state on our borders founded by a terrorist group known as ISIS.

Established on occupied lands in Syria and Iraq, ISIS almost has all the vital signs of a real country; its own army, currency, laws and propaganda machine and is somehow able to sell oil (from fields it took by force) and buy weapons.

Obviously, whatever perks ISIS enjoys today is a natural outcome of a global failure in dealing with its threats and causes (mainly the tyranny of the Assad regime). At the core of this international failure is a reclusive and non-interventionist U.S. foreign policy seen since the Obama administration took office in 2009.

Needless to say, the vacuum left by America was quickly filled by Iran (which now boasts the occupation of four Arab capitals) and more recently, by Russia which is now enjoying its biggest ever presence in the Arab World since President Sadat of Egypt expelled the Soviet military advisors in 1972.

A beacon of hope So is it a hopeless case for the Arab World? Not really -- modern history has seen many successful resurgences: Japan, South Korea and the BRICS are good examples of what can be achieved in just a matter of decades.

However, in all of the above cases, there were several similarities which identified the road to success, mainly: 1) A clear definition of the problems that needed to be addressed, and 2) Leaders who were determined to do whatever it takes to overcome these problems.

As such, our region could arguably surpass most of its issues if these two conditions for success were met and last week, Dubai witnessed a major announcement which may very well be the first step on a long road to recovery for the whole region.

Aiming to help nearly 130 million people by 2025, the Mohammad bin Rashid Al Maktoum Global Initiatives was unveiled by HH Sheikh Mohammad in an attempt to bring together the work of 28 organizations under one umbrella, as well as coordinate the efforts of 1400 human development programs in more than 116 countries.

What is definitely note-worthy is the four areas the new foundation chose to focus on: Fighting poverty dissemination of knowledge, community empowerment and innovation for the future.

Once the combined targets are met, the four pillars which comprise Sheikh Mohammad's plan can form a long-term regional remedy and a road-map to pan-Arab prosperity, and not just serve as a pacifier to help overcome current woes.

Also note-worthy is the emphasis on the Arab World, a matter which was further confirmed in a statement by UAE Minister of Cabinet Mohammad al-Gergawi.

"The circumstances which the (Arab) region is going through calls for immediate action, albeit our direction will always be that we will always aim to help people of all races and all religions without any discrimination," Gergawi said.

Already stalling behind in many key areas, the bulk of the Arab world is in desperate need for development and a "Marshal Plan" to bring it back to its feet.

Again, while hoping not to sound pessimistic, one must emphasize that Sheikh Mohammad's initiative may very well be region's last chance to catch up with the rest of the world and safeguard a better future for the generations to come.

However, for Sheikh Mohammad's "Marshal Plan" to work, benefiting nations and people must acknowledge their problems and commit to doing what it takes to help resolve them. As such, shameful malpractices -- such as stealing from foreign aid intended to help refugees -- must stop.

For his part, Sheikh Mohammad acknowledges this is not going to be an easy task, nevertheless he seems ready and excited to accept the challenge.

"The mission is big... but the determination is bigger" he said at the conclusion of last week's announcement.

Interestingly, it seems to me that I was destined to be the first beneficiary of this new initiative... I say this because a quote by Mohammad bin Rashid is one of the scarce ways one could end a column about the Arab world on a positive note!

*This blog post was originally published in Al Arabiya News.