Whether fire ants bow to one queen or accept many rulers depends on one long strand of genes, a new study finds.

The gene sequence is the first "social chromosome" ever discovered, according to study researcher Yannick Wurm of Queen Mary, University of London, who called the DNA sequence a "supergene."

"This was a very surprising discovery," Wurm said in a statement. "Similar differences in chromosomal structure are linked to wing patterns in butterflies and to cancer in humans, but this is the first supergene ever identified that determines social behavior."

The fire ant Selenopsis invicta is one of many fire ant species known for nasty stings. The species is native to South America and invasive elsewhere. One of its odder traits is a particular flexibility about its social structure. Some members of the species live in colonies with a single queen, while others tolerate hundreds of queens. [Gallery: Stunning Photos of the World's Ants] 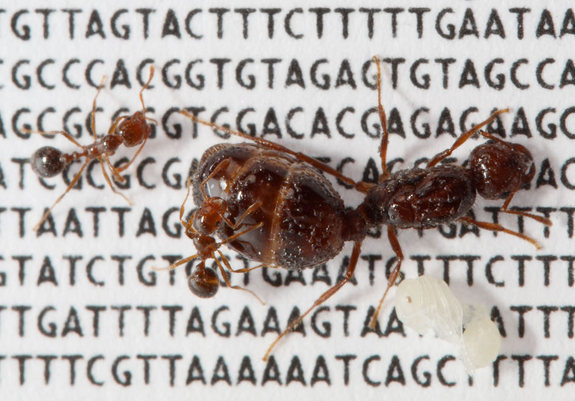 The chromosomal differences have been linked to a number of anatomical differences in the ants, Wurm and his colleagues wrote, from the queen's fecundity to the size of male workers and the structure of their sperm. These differences could explain how the ants "know" what sort of monarchy to accept.

The two different genes may also confer their own advantages. BB queens mate and disperse to their own colonies when they reach maturity, making them good at invading new areas, the researchers wrote. Bb queens join others near their maternal colony and, working together, produce more workers overall. This might make them more successful in previously colonized areas.

Wurm and his colleagues plan to dig deeper into the chromosome to find out which of the 616 genes in the social sequence are responsible for the differences between ants. They also hope to find out if similar sequences play social roles in other species. And the differences aren't just academic. The fire ants have spread into the southern United States as well as Australia and China, where they are major pests.

"Our discovery could help in developing novel pest-control strategies," Wurm said. "For example, a pesticide could artificially deactivate the genes in the social chromosome and induce social anarchy within the colony."