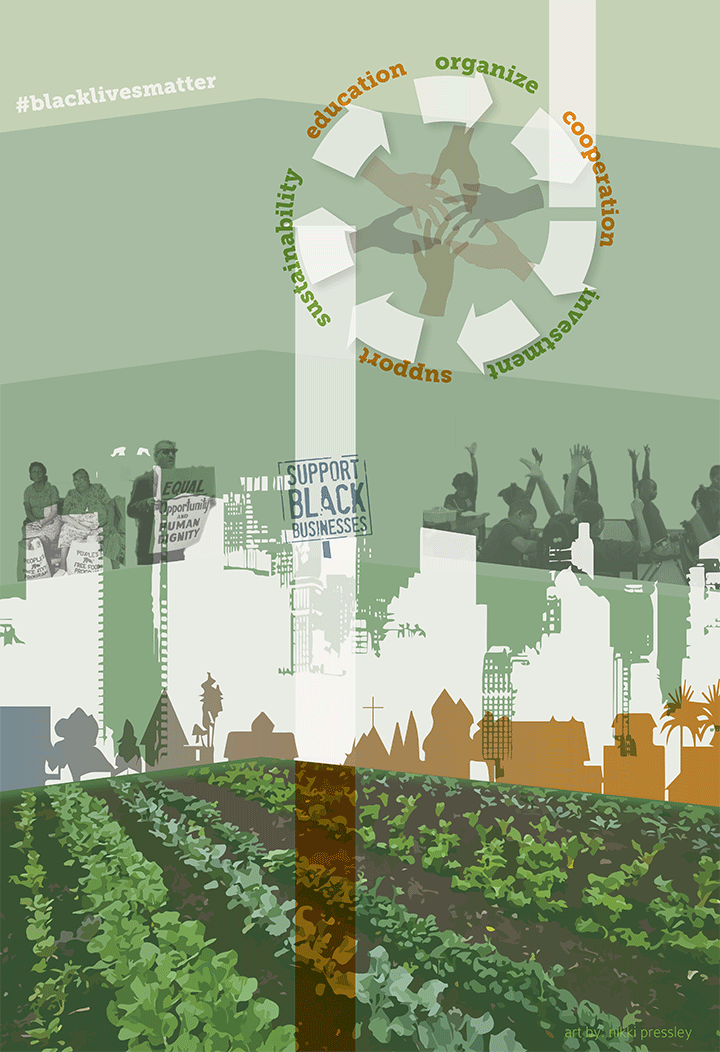 The Black American economy is recovering - I hope - from what Princeton University professor Eddie Glaude calls the Great Black Depression. Black unemployment, as of December 2015, was 8.3%. One-quarter of black households has less than $5 - the price of a fast-food combo order - to use in moments of sickness, lay-offs, or other financial emergencies. The political economy is even worse. In Flint, MI, as is well-known, black folk ain't well. We can't even count on government officials, elected or administrative, to guarantee the quality of a basic public good - drinkable, bath-ready water.

While it contains progressive individuals like Reps. Keith Ellison and Donna Edwards, the Democratic Party, writ large, has ceded rhetorical, philosophical, religious, basically, any ground worth fighting for to a Ronald Reagan policy frame-Richard Nixon "black capitalism"-Lee Atwater "Southern Strategy" political economy of dog-whistle racial coding, austerity for everyone boulevard except Wall Street, and debt-fueled, people of color, peonage in the form of predatory lending, subprime mortgages, and student loan burdens. Lest I be accused of rank partisanship unbecoming a Christian minister, I hasten to add that despite my disagreements, I welcome healthy debate among public-spirited conservatives like Kay Coles James, the late Sen. Edward Brooke, or the often-invoked Republican, Frederick Douglass. Nevertheless, the facts - heavily or lightly interpreted - prosecute their own case: black folks in America are deeply wounded economically, looking for some kind of balm in our present, seemingly bleak, social order.

Given this climate, despair is an ever-present option. It is not, however, our only or best option. We can say, with Dr. King and Howard Thurman, that there is a luminous darkness of economic opportunity, even in the midst of massive unemployment, vacant tracts of land in Detroit, and many other once-black post-industrial cityscapes. We can, with the unshouted courage of womanist ethicists, continue or commence the oft-thankless labor of urban planning and social enterprise construction that supplants the exploitative arrangements of capitalism among us.

One great conflict of black economic futures concerns the clash between the austerity, wasteland impulse of black capitalisms and the abundance, wondaland instincts of black capitalisms...and dare I say, socialisms. I compose from the Rev. Martin Luther King tradition of democratic, electorally-accountable, socialism. By socialism, I mean what Woodrow Wilson intimated: democracy taken seriously. With King, I maintain that democracy transformed from thin paper into thick action can be a tremendous form of governance. How might the politics of abundance, the Wondaland political economy of our dreams - or at least, my dreams - win out? Three thoughts for consideration.

Rebuild black worker associations. Economic justice is a racial justice issue and power dilemma. Without strong black working-class groups, nothing of lasting substance can be done electorally, politically, or economically. Without membership-based unions fighting for wages, fair scheduling, decent benefits - and the common good of non-members - black economic futures will remain stuck in a cycle of what Jamye Wooten calls re-activism, instead of building the citizen groups that can co-govern our institutions - the kind of deep democracy that Ella Baker envisioned - alongside our duly elected representatives. There's a reason SEIU is calling for $15 an hour and a union.

Use culture to dismantle socioeconomic racism. Stories, sermons, songs, street art, documentaries, children's books, op-eds, and other cultural productions are foundational, not peripheral, to the work of dismantling socioeconomic racism. It's also important, as Prince and B. Slade note, for folk of color to own, distribute, and consume this content. Why? It exfoliates the narrative of white folks as THE capitalists or THE socialists and black as the benighted, spoken-for laboring folks from our imagination. Such cleansing enables fresh new stories, new ways of structuring our life together to emerge.

Abandon black elitisms, embrace black solidarities. We cannot mentor our way out of racism. We cannot Divine Nine our way out of capitalism. We cannot code switch our way into the America of our dreams. We cannot vote away a history that anoints whiteness and curses blackness, by statute and symbol. We cannot even rely on the office of the Presidency to save us. The domestic policy constraints are too entrenched, too strong. We can, however, implement grassroots democracy that holds representative democracy accountable, particularly on public finance matters. What's the way forward? Black solidarity coalitions, across America and the Atlantic, between labor, faith, academy, and community-centered commerce (credit unions, public banks, community land trusts, etc.).