In case you haven't heard, February is the month to buy a solar company. There have been recent acquisitions by Enphase, Canadian Solar and Trina Solar stated earlier it is in the hunt. From the utilities, both Duke and NRG have made massive solar investments. Even Apple and First Solar struck a deal in what CEO Tim Cook described as Apple's "biggest and most ambitious project ever." On the other hand, for years Eric Wesoff at Greentech Media has catalogued all the solar companies that have gone 6-feet under. Why is there so much investment and M&A activity in an industry plagued by bankruptcy? The answer is that solar energy is now on a growth path that will make it the energy story of the 21st century. How could bankruptcy lead to such fantastic growth? I say it all started with Solyndra.

When Solyndra went bankrupt in 2011, many despaired that the sky was falling on solar. My neighbor told me, "Too bad that solar stuff didn't work out." I would like to assert that Solyndra was actually great for the solar manufacturing industry, and recent consolidation news is further evidence of it. That may sound insane, but the rise and fall of Solyndra was an important indicator that the solar industry would grow at an amazing rate. This can be seen by looking at the history of a comparable industry: automobiles.

Automobile Industry Races Off, But Not Most Automobile Companies

Now that the U.S. has a mature automotive industry with three major manufacturers, it is easy to forget that in the early 1900s there were over 300 American auto manufacturers. This was a period of great innovation in automobiles, but there were very few sales due to the high prices. In fact, the President of Michigan Savings Bank told Henry Ford's lawyer, "The horse is here to stay, but the automobile is only a novelty -- a fad." Then something occurred, and as a result, nearly all those car companies went out of business in about 15 years, but car sales skyrocketed. That occurrence was Henry Ford.

Many automobile innovations at the time focused on higher performance or frilly luxuries, but Ford focused on lower cost. The invention of the assembly line greatly reduced the cost-structure for automobiles, making them affordable to a larger portion of the population. Sales took off. 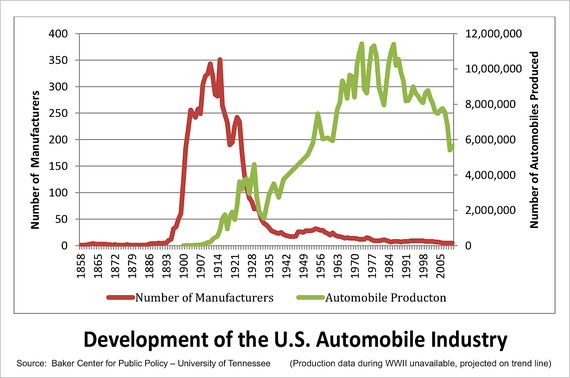 The paradox is that this huge growth in Ford sales was associated with a huge collapse in the automobile industry -- lots of companies went bust. Apart from a few exclusive luxury brands, the companies that could not compete on cost went bankrupt.

While the manufacturing base became less diversified, viable innovations from companies that went under -- innovations that improved safety and comfort -- became available to surviving manufacturers. These innovations benefitted the automobile industry and society as a whole, even though most originators went bankrupt.

The remaining automobile companies consolidated, enjoyed huge sales and became today's industry leaders. Essentially, the industry consolidation was the harbinger of real growth; it was the result of competitive market forces driven by low cost. This rapid collapse of companies could be seen as the signal for the "true" birth of the automotive industry.

The True Birth of the Solar Industry

Now let's look at the solar industry. In the early 2000s, billions of dollars were poured into solar and that fostered a huge increase in innovation: hundreds of solar companies were formed. Many focused on "sexy" new technology and high performance devices, but only some focused on cost.

Previously high solar costs limited the market to solar-techies, tree-huggers and off-grid applications. Just like Ford with automobiles, the entrance of China as a major manufacturer greatly reduced the cost-structure for solar, making it more affordable to a larger portion of the global population. Sales are taking off. 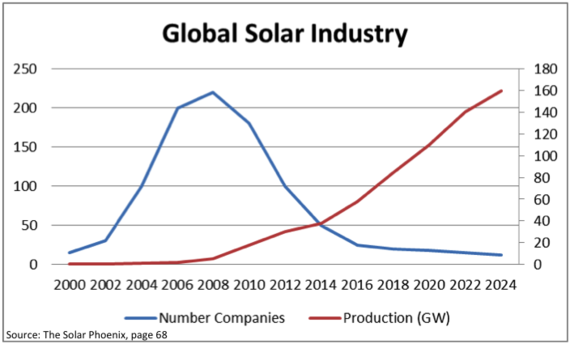 It just turned out that it was China -- not Solyndra -- that was the driving force for change. Solyndra, however, was the most noteworthy demise because it clearly signaled the "true" birth of the solar industry. Just like with automobiles, the crossing of that cost tipping point signals the creation of an industry that will grow for 30-40 years at tremendous rates. With that boom comes the growth-related continuous-cost reduction, so clean energy will become even more affordable and at some point may become close to free. This is a level of freedom the world has yet to experience, but it is starting to happen. And that is why Solyndra was great news for the solar industry.

Will the world eventually see Solyndra as a positive turning point, marking the birth of the modern global solar industry? I think it will. In fact, it motivated me to write a book, The Solar Phoenix: How America can Rise from the Ashes of Solyndra to World Leadership in Solar 2.0. Despite the consolidation, bankruptcies and other tumultuous events, this is in fact a time to be very excited about the future of the solar industry.

Author of “The Solar Phoenix,” a roadmap to a clean energy future, and CEO of Siva Power, an advanced solar company in Silicon Valley.