Kelley McCahill took her 70-year-old mother to see a plastic surgeon about having a cancerous growth removed from her nose last Thursday.

"If not the first sentence, the second sentence out of his mouth was, 'We can still get this done because Obamacare's not in place,'" McCahill told the Huffington Post. She said that the doctor, in a casual and jovial manner, repeatedly bashed President Obama's health care reform agenda during the 15-minute consultation.

"I'm sitting between my mom and the doctor. I look down. I was literally just wanting to melt," said McCahill, 40, who works as a drug counselor in Chattanooga, Tenn. and describes herself as liberal. She bit her tongue. "This is my mom's doctor and I don't want to offend him because her care is in his hands."

Across the country, some doctors are using scare tactics to advocate against health care reform, according to anecdotal reports from Huffington Post readers who were asked to share their experiences. Sometimes it happens right in the middle of examinations, and some doctors whack their patients with the most outrageous claims of reform opponents.

Doctors who support reform -- and there are plenty -- appear to be no less likely to bring it up. There is no sign of an organized campaign either way. For some doctors, it's just idle chit-chat. But ethicists warn that doctors should not abuse their position to propagate a political viewpoint, much less to frighten trusting patients with talk of "death panels" and withholding treatment from grandma.

Doctors speak to their patients from a position of authority, and people generally want to maintain a positive relationship with the person in charge of their treatment and medication, explained Arthur Caplan, director of the Center for Bioethics at the University of Pennsylvania. Caplan said there's nothing wrong with doctors providing information on proposed reforms or expressing political opinions, but they should be careful what they say to patients under their care because of the imbalance in the relationship.

"The trick is: Do not coerce, intimidate, or be seen as pressuring your patients. It is risky to be proselytizing patients in the office, because while you may not intend to coerce them, they may hear it that way," said Caplan. "If you feel like you can't speak back, respond and argue, you're being coerced. If somebody says, 'I felt like I had no choice but to sit there and listen,' they're being coerced."

Joe Dorsey felt like he had to sit there and listen when he went to see a new doctor three weeks ago for prostate cancer treatment in Texas.

"I was stunned because we weren't there very long and he starts talking [political] issues," said Dorsey. "I'm not sure how we got on to that topic. God knows I didn't bring it up. My mind was on, 'I've got cancer.' That's what I was there for."

Dorsey, a 68-year-old retiree who lives near Houston, kept his mouth shut as his doctor rattled on: "'If you were in Sweden today they'd say you're too old. They'd tell you to go home and die.' I didn't say anything because they wouldn't have treated me."

Teresa Burlew, a 51-year-old in Woodbridge, N.J., said that during a physical two weeks ago, her physician recommended that she get as many tests done as possible before health care reform passes. "'You better get this test, you better get that test, because you don't know what's gonna happen,'" Burlew recalls being told. "She said, 'Oh, I really feel sorry for my Medicare patients because they're going to lose their Medicare.'"

Burlew said she told her doctor she didn't think things would turn out that way, but kept her disagreement mild. She was about to get a TB shot. "I couldn't get testy because she had a needle in her hand and she was gonna use it!"

Eric Stein went to see his doctor in Los Angeles, Calif., for a routine ear-cleaning procedure last fall. He was alarmed to discover that his doctor was out of town, leaving him in the hands of the doctor's assistant, who, instead of using the usual vacuum device, was brandishing some kind of poker with "a protruding piece of metal like a wire" on one end.

"She had the instrument in my ear and she couldn't do it correctly. She was really scraping," said Stein, 34, an actor and musician. Stein said he was nervous, so he tried to calm his nerves by chitchatting. He mentioned that he didn't have insurance, and he made a negative remark about insurance companies.

The assistant reacted strongly. "She said, 'Oh, well, you're lucky you don't live in Canada or Britain," and she mentioned the allegedly long wait times for treatment in those countries. Stein was taken aback but decided to keep his mouth shut.

"I didn't want to have an argument with that needle next to my brain," he said.

Jim Heltsley, a 67-year-old retiree in Florida, said his chiropractor dumped him after he questioned an anti-reform flier in the waiting room.

"I went from being a good patient to a guy that was told to 'Go to hell'. This all happened in 30 seconds," said Heltsley. "It was a guy I went to for five years, sometimes up to two or three times a week."

The St. Petersburg Times first reported the breakup. Heltsley confronted the doctor over a flier that said, among other things, that the bill approved by various House panels would ration care.

"I just ducked into his office and I set it down on his desk. I said, 'Dr. Mike, who put this out?' And he says, 'It's all true.' I said, 'No, those are myths, they've been debunked," said Heltsley. "The next thing I knew he was standing up and he said, 'You can go to hell,' and on the way down the hall he goes, 'I'm dropping you as a patient.'"

Some doctors' offices send out letters to all their patients asking them to wade into the debate and call their representatives in Washington. In July, the Southwest Internal Medicine Specialists in Orlando, Fla. sent a letter that said some of the proposed reforms "will harm American taxpayers and directly interfere with your healthcare."

The letter hits the usual points: government bureaucrats will interfere with your health care, people in countries with socialized medicine have to wait forever to see specialists, screening procedures will be denied. It then invites patients to become members of the American Medical Association's Patients' Action Network and do some lobbying.

A patient who forwarded the letter to The Huffington Post didn't think too highly of it: "I find this kind of behavior unconscionable, especially in a practice which serves a high proportion of elderly patients," the patient said.

M. J. Galceran, one of the three M.D.s in the practice who signed the letter, told the Huffington Post that the response to the 6,000-person mailing was overwhelmingly positive.

"We've had really maybe half a dozen people say they're disappointed in our stance, [but] I've had a couple dozen thank me for writing the letter," said Galceran. He added that he and his colleagues never initiate a political discussion in the exam room. "I think it's just courtesy. I don't think it's appropriate. But if the patient wants to talk about it, it's a different story."

Galceran said they wrote their letter before the AMA came out in support of reform that's taken shape in the House of Representatives, and that his practice subsequently dropped out of the organization.

Some doctors make no apology for bringing up politics in the exam room. Dr. Ari Silver-Isenstadt, a pediatrician in Baltimore, Md. and an active member of the pro-reform National Physicians Alliance, told the Huffington Post that he's hung fact sheets in his exam room and waiting room that say "Dr. Ari Supports Health Insurance Reform." He often talks with parents about it.

Bill Dougherty of Wilmington, Del. noticed a political sign in his physician's exam room. He snapped a picture with his phone while he waited for the doctor: 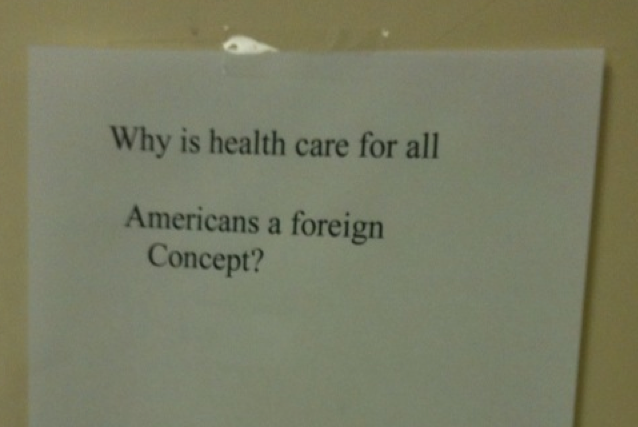 Another sign in the waiting room asked how the U.S. can spend billions a day on foreign wars but can't afford to provide its citizens with health care.

"It makes sense, obviously doctors have more of an opinion about this than anyone, but it kinda throws you to see it, because it's not kind of a place for politics," said Dougherty in an interview with the Huffington Post. "I was happy to see it because I agree with the sentiment, but I can imagine someone with the opposing viewpoint being thrown by it."