HUD has administered the planned obsolescence of public housing for well over 15 years. According to HUD, 150,000 units have been lost to demolition and disposition, although the number of lost units is probably closer to 280,000 if taken from the Millennial Housing Report and Ways and Means Committee's Green Book. There are also an estimated $20-30 billion in maintenance backlogs. 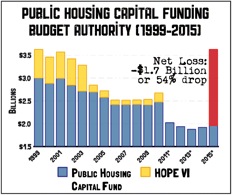 HUD Secretary Shaun Donovan argues that things have gotten so bad that we must open up public housing to private capital or "lose these irreplaceable resources forever."

The pivotal decisions by Congress to cut annual appropriations for the Public Housing Capital Fund and to lift one-for-one replacement for any public housing unit lost to demolition or disposition were neither necessary nor inevitable. They were politically, not economically, determined. Other choices could have been made. For instance, George Romney, HUD Secretary under President Nixon, suggested that, if necessary, money for public housing should come from reforms to Mortgage Interest Deductions, a reasonable alternative considering 75 percent of this expenditure benefits homeowners earning more than $100,000 a year. 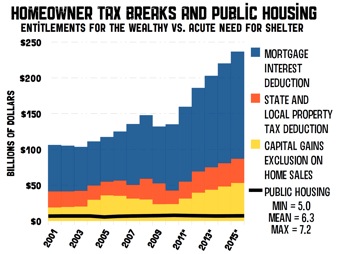 Shaun Donovan's plan is to open up public housing to private investment. The plan relies on debt financing that would put up 280,000 public housing units as collateral. The initiative is called Transforming Rental Assistance. The initiative has been introduced to Congress as the Preservation, Enhancement, and Transformation of Rental Assistance Act. After rejection by both House and Senate appropriations for FY2011, the legislation has been slightly altered and reintroduced as the Rental Housing Revitalization Act by Congressman Keith Ellison.

Amongst many other concerns, most notably the undermining of public housing as a public good, the effect on tenants' rights, and the exposure of units to foreclosure, the plan will certainly raise the ceiling on affordability as lenders look for a return on their investment. (Click here to read a letter to Secretary Donovan outlining the concerns of local and national organizations working to protect the human right to housing about this plan.)

Quite frankly, for how much they've been touted as efficient and innovative in leveraging private capital, mechanisms like Low Income Housing Tax Credits (most likely the program to be used for private investment in public housing) have done little to provide affordable housing to those earning less than 30 percent of Area Median Income, i.e. public housing tenants.

A good example is the private-public partnerships Donovan developed as head of New York City's Department of Housing Preservation and Development. According to the New Housing Marketplace Plan, he helped create 88,000 new affordable housing units, but only "68 percent of these units will be affordable to those earning less than 80 percent of Area Median Income and the remaining 32 percent of units will serve moderate and middle-income New York Families." We are concerned that the returns that would satisfy investors would mean gentrification, displacement, and homelessness for public housing tenants.

Shaun Donovan's framing of the problem and the solutions he puts forward strike us as misleading and risky. The medicine he prescribes is more of the same "creative financing" that got us into this mess in the first place. To expect a different result is the definition of insanity. It's time we move beyond symptoms to the root cause of the malady.

The Housing Act of 1937 was created to remedy the "acute shortage of decent, safe, and sanitary dwellings for families of lower income." The legislation was a direct response to the housing market's failure to provide adequate housing for millions of people. The act acknowledged that the federal government had a responsibility to provide a home for all Americans. For over 70 years, public housing has provided the opportunity for people to build better lives. Public housing's problems do not stem from anything inherent to its mission. Public housing has not failed; public policy has. The problems it faces today come from policy decisions to allocate public resources for housing that benefit people with higher income levels rather than fairly distributing funding to all Americans.

In testimony given on April 14, 2010 to the House Financial Services Committee, Donovan stated that the nation's housing financing system should "ensure that private sector gains and profits do not come at the expense of public losses." We would like to see this standard applied to public housing. Because whether through demolition, disposition, or the proposed Rental Housing Revitalization Act, we are allowing private sector gains and profits at the expense of public losses for those least able to afford them.

Since HUD first introduced what is now the Rental Housing Revitalization Act to Congress last May, HUD approved the "loss" of another 9,150 public housing units through demolition or disposition. Over the same time period, 10,170 actual units were "lost" by previously approved demolitions or dispositions. Each and every unit that has been "lost" has been applied for by a Housing Authority and approved by HUD. HUD and Congress claim no responsibility for what in fact they have authorized. Moreover, they are using these "losses" as rationale to pass legislation that will further compromise public housing's longevity.

As a country, we must stop gambling with people's homes. We must change our priorities and work for a fair housing policy that ensures everyone has a safe, decent place to live. There are better alternatives than selling off public housing, but we will have to organize en masse to win them.

A special thanks to Nicholas Dahmann of Los Angeles Community Action Network for working on this article.