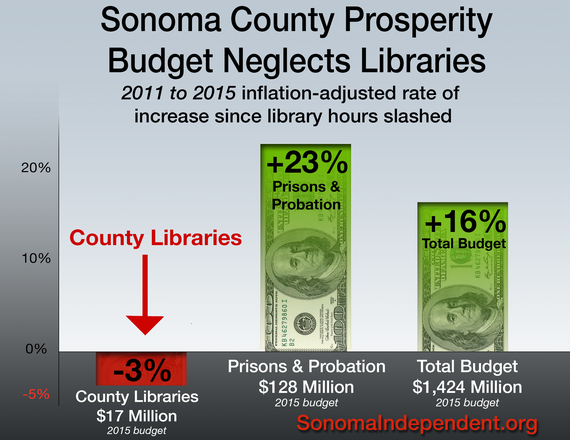 It has been a phenomenal year for Sonoma County's surging economy. Joblessness is below 5%, home values are soaring, and the County's treasury has been fattened by a record surplus of $13.5 million. Yet for the new fiscal year starting this July, the County's Board of Supervisors are refusing to spend just $1.2 million of this surplus to restore a 25% cutback in library hours initiated four years ago during the recession. This cutback caused libraries to close Mondays for the first time in a century, leaving 100,000 seniors, teens, children and patrons locked out of this vital community resource.

Meanwhile, during the same four-year period, despite a decline in crime, County spending on prisons and probation has increased by $28 million, up 23%.

Sonoma County, known as "Wine Country," has a reputation as a politically progressive community that values education and public resources. Yet despite steady usage, the County's 11 major libraries are now open only 40 hours per week, compared to 52 hours four years ago, and 70 hours in 1981 (when the County was far less prosperous and far more Republican). 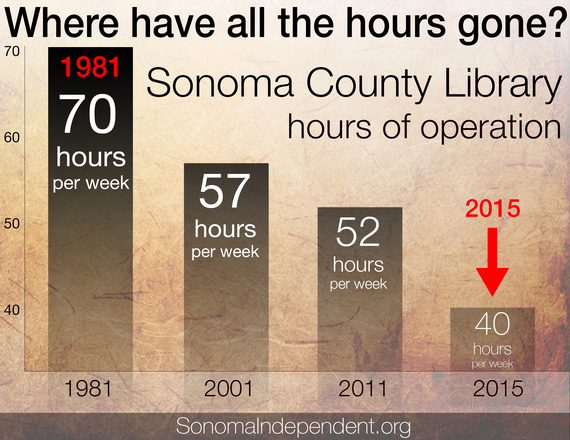 Sonoma County now spends just $34 per capita on libraries. That's just half of what Napa and Marin County spend, and barely one-quarter of the $124 per capita that San Francisco spends. 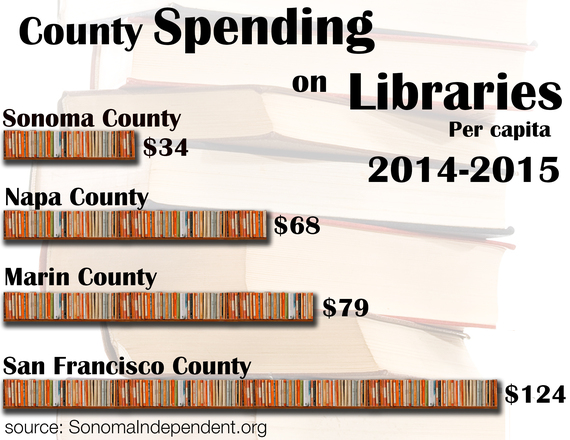 More than 1,100 citizens, including many parents, grandparents and educators, have signed a SonomaIndependent.org petition urging Supervisors to take $1.2 million from a projected $6 million that is about to be added to a $32 million rainy day reserve fund, and use it to restore Monday openings. More than 120 eloquent expressions of support from the petition were published as a special Sonoma Independent feature this week. Yet to date, none of the five elected members of the Board of Supervisors (Suasan Gorin, Shirlee Zane, David Rabbitt, Efren Carrillo, and James Gore), each paid about $150,000 annually to oversee the County's $1.4 billion budget, has said that he or she will allocate any funds to restore cutback hours.

County Supervisors and their staffers argue that there is no money available to restore library hours, and that this is not their responsibility because a dedicated parcel tax funds our libraries. But there is nothing to stop the Supervisors from adding funding for libraries for the next few years, until a revenue measure can provide more permanent funding. During the past few years, when dedicated funding has fallen short for other services, like road repair ($8 million extra annually), a sixth marijuana "eradication" officer for the sheriff's department, or hundreds of thousands of dollars in additional health program marketing for seniors, Sonoma County's Supervisors have allocated money from the general fund during budget season.

During a recent interview with the Sonoma Independent, Sonoma County Supervisor Susan Gorin, Chair of the Board, was asked whether any services provided by the County that served so many citizens (100,000 regular users) had been as severely reduced by the recession and then not restored during the past few years. She replied, "So many things have not been restored. Staffing levels...the appropriate amount of staff in construction, code enforcement, you name it and it's had a cutback."

This is a surprising statement, According to the Press Democrat, since the recession budget of 2011, the County has restored 500 County positions and added 400 new jobs, at a cost to taxpayers of an additional $86 million per year. Libraries, during this period, have had no additional positions created, but cut dozens of part time positions.

Gorin said, "I feel and share your passion for libraries. And yet I don't know how we're going to get there. We have a lot of needs. We need to make an ongoing commitment to roads. We need to fund some of the recommendations of the community enforcement task force. We need to make a commitment, I think, to boost wages to $15 per hour, or as far as we can get it. And there's a list there."

Dr. Silvano Senn, a Sebastopol-based dentist and strong library supporter, believes that Supervisor Gorin is "just touting the party line. He observes that libraries have now become "our County's poor stepchild, whom they kick to the curb all the time." Senn believes that, "Libraries are so important to any vibrant, growing community. From the standpoint of youth and the aged, it's a place they can go and learn without any expenditure. To defund libraries is to defund the future. It's defunding people's minds, defunding the community that comes together to talk. To not bring them up to par at least is almost an inhumane act."

Linda Haynes, of Santa Rosa, wrote on a Restore Library Hours petition that supervisors were mis-prioritizing her tax dollars. "Please stop throwing money at the un-winnable fight against marijuana growers and re-direct those funds toward the public library system."

Haynes echoed a popular sentiment. As the Sonoma Independent's graph on the top of this page shows, during the four years since the Monday closures in 2011, the total Sonoma County budget, when adjusted for inflation of 5%, has increased by 16%. During this same period, inflation adjusted library spending decreased by 3%. Meanwhile, despite declining crime rates, inflation-adjusted spending on prisons and probation during the same period has increased 23% -- by $28 million annually. Just 5% of that increase alone would have funded Monday library openings.

The result of the Monday and evening closures brought on by the largest funding crisis in the history of Sonoma county's libraries has been that this most vital public resource has locked its doors on tens of thousands of toddlers, teens, parents, seniors and patrons, who had relied on regular library service. Library visits, which, with free Internet service, DVD lending, and a free, safe space for all, had held steady until the cutbacks, plummeted.

Fewer hours has translated into a 22% reduction in visits, meaning 600,000 fewer trips to the library each year. Cutback hours has created lines for computer usage, and reduced services for the more than 100,000 citizens who use the County libraries.

"I have a simple request for the Board of Supervisors, one for which there is crying general need," says local historian Frank Baumgardner, author of Blood Will Tell: Divvying Up Early California. "Please allocate a moderate outlay of $1.2 million for the Sonoma County Public Library to come from the general fund. As the Library has had to cut its hours for four long years, it sorely needs this money to reopen its doors on Mondays."