As if playing dress-up, squids and octopuses are able to change color and even patterns on their skin. How do they do it?

"We know cephalopods use their tunable iridescence for camouflage so that they can control their transparency or in some cases match the background," Dr. Daniel E. Morse, professor of biochemistry at UC Santa Barbara, said in a written statement. "They also use it to create confusing patterns that disrupt visual recognition by a predator and to coordinate interactions, especially mating, where they change from one appearance to another."

Interesting. And now, Morse and a team of researchers from UCSB have found in a study that specialized cells in the squid skin, called iridocytes, contain deep pleats of the cell membrane. These pleats extend into the body of the cell, which creates layers that operate as tunable reflectors -- reflecting light and creating this shift in appearance. 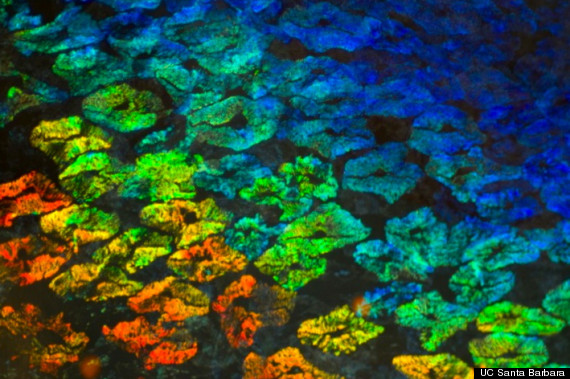 This shows the diffusion of the neurotransmitter applied to squid skin at upper right, which induces a wave of iridescence traveling to the lower left and progressing from red to blue. Each object in the image is a living cell, 10 microns long; the dark object in the center of each cell is the cell nucleus.

"This is the first time that switchable white cells based on the reflectin proteins have been discovered," Morse said in the statement. "The facts that these cells are switchable by the neurotransmitter acetylcholine, that they contain some of the same reflectin proteins, and that the reflectins are induced to condense to increase the refractive index and trigger the change in reflectance all suggest that they operate by a molecular mechanism fundamentally related to that controlling the tunable color."

How exactly does the "tuning" happen? The researchers created antibodies to bind specifically to the reflectin proteins, and they found that the cascade of events that results in color-shifting was tied to the expulsion of water across the pleated membrane, causing those reflector layers (also called lamellae) to shrink and dehydrate, reducing their thickness and spacing.

"The animal can control the extent to which this happens," Morse said in the statement. "It can pick the color –– and it's also reversible. The precision of this tuning by regulating the nanoscale dimensions of the lamellae is amazing."

The study published in the current issue of The Scientist.