If you follow me on social media, you might have seen a recent post about a stand-up comedy show I did at The World Famous Comedy Club. Maybe you thought to yourself: Huh?

Why am I tackling stand-up at my age? I'm not sure either, but maybe I'll have an answer by the end of this post. Like everything else, it's complicated.

I'll begin exploring my psyche with some bullet points:

Access: Ever since I moved to Los Angeles (right, smack dab in the middle of West Hollywood), I've made it my mission to take advantage of all the professional creative experiences this strange city has to offer. I'm within easy driving, Uber, or walking distance of all sorts of possibilities. I've taken improvisational comedy classes at Underground Comedy Brigade, creative and screenwriting classes at UCLA, and just last month a stand-up comedy class at Acme Comedy Theater.

Opportunity: The beauty of living in LA is that most everyone is pursuing some creative passion -- not just acting, film or theater. Does the city have as many comedy clubs as New York? Nope. But there are plenty of entertainment bookers looking for new talent. I have to work at not doing more shows. 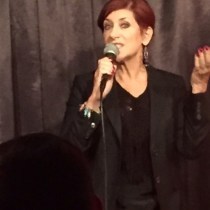 Age: I'm 50-frikkin'-nine-years-old. The bucket list is real, and it's long. Plus, "dying on stage" takes on new meaning.

Material: I had the business of boobs and my tagline in mind when I signed up for the class. But I found myself talking more about my personal experiences. Turns out I've been practicing this "act" in grocery store lines and with good friends and lingerie buddies at trade shows. Something about my potty mouth point-of-view, combined with a loud personality, is welcomed. Being an assertive, aging female is no handicap.

Fear: I've learned over the years that truly living my life is about getting out of my comfort zone. I had never blogged before I started a website. I'd never written a book, but that didn't stop me. (Although, ironically, writing the first didn't make it any easier to pen a second.) I've done national television and radio interviews so I'm familiar with stage fright. Doing stand-up comedy is a whole new level of fear for me. It's the equivalent of riding a rollercoaster: terrifying and exhilarating at the very same time. When the audience laughs, it's a definite high.

Inspiration: Writing stand-up is a new skill I'm learning. The Breast Life isn't about nailing punch lines, but this outlet makes it easier for me to write my blog or work on my book manuscript. Doing one creative thing inspires another. I'm not even sure how long I'll keep going on stage. Every gig could be the last one.

Besides, maybe my willingness to go on stage will give someone else the courage they need to do something they've always wanted to try. I'm still changing the world, one boob at a time.

So why am I doing stand-up comedy? Maybe the answer is "why not?"

What about you? Have you ever done something outside your comfort zone? How did it turn out?

This article originally posted at The Breast Life.