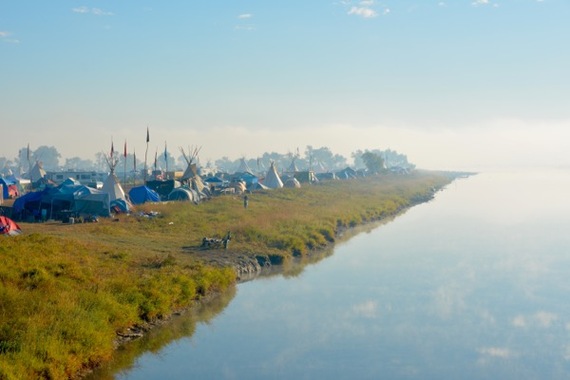 Texas based Energy Transfer Inc. and its partners on the Dakota Access Pipeline (DAPL) may have bulldozed ancient burial grounds, but the oil interests have not demolished the will of the self described "water protectors" supporting the Standing Rock Reservation. "Mni Wiconi" (water is life) is the prayerful battle cry of the thousands of protectors camped along the confluence of the Cannonball and Missouri Rivers in south central North Dakota. In July 2016 the U.S. Army Corps of Engineers gave its approval for the pipeline to run within a half mile of the "official" boundary of the Standing Rock Sioux Tribe. There had been no proper consultation with or consent from the tribe on the pipeline scheduled to cross upstream, endangering drinking water, sacred treaty grounds, and therefore tribal identity.

The People are in this for the long haul and last week offered them a mixed court ruling, an unexpected show of support from the Methodist Church, a Nursing Union's strong stand against the AFL-CIO, and ominous requests from the State of North Dakota.

In Bismarck, the North Dakota U.S. District Court dissolved an August 15 restraining order filed against Standing Rock Sioux Tribal Chairman Dave Archambault II and other participants involved in protests against the construction of the DAPL. The water protectors camped near Lake Oahe and where the pipeline is planned to cross under the Missouri River essentially shut down the project. At issue is "an unconstitutional prior restraint on fundamental First Amendment rights to freedom of speech and assembly and free expression of religion," and that "Dakota Access does not have standing to prohibit water protectors from praying at and protecting ancestral sacred sites on public or private land," according to a statement provided by the National Lawyers Guild.

It did not go unnoticed by the District Court that DAPL bulldozed many of the sacred and historical sites under discussion less than 24 hours after they were identified in a lawsuit filed by the Standing Rock Sioux Tribe. In another unspeakable and egregious move, DAPL utilized mace, pepper spray and dogs to attack peaceful protectors who tried to defend the ancient sites and burial grounds. The American public did not like what it saw on national news broadcasts, and the mainstream media gradually picked up on what at first seemed like a hopeless but noble fight against big oil money interests. Dogs with bloody mouths attacking woman and children were just too much. More than once, tribal members commented that perhaps the Creator had a reason behind the violence, desecration of graves and assault on tribal history. Everything has meaning and not everything is fully within understanding. But this was completely unacceptable. The bones of the ancestors were under assault and some warriors protecting the graves in the aftermath spoke of being pushed by unseen forces.

In his dismissal of the August restraining order filed by DAPL, District Judge Daniel L. Hovland unfortunately left it up to local authorities and the criminal courts to deal with those accused of breaking the law. Meanwhile, local authorities are accused of massive over-reach and are charging non-violent actions as felonies. Surveillance helicopters and fixed wing aircraft buzz the camps night and day, disturbing the natural tranquility of the countryside and the mental well being of the campers. "Although the judge went out of his way to show his disdain for many of the water protectors, he also became aware that this was a political controversy that he likely could not control and the mechanism of an injunction that was unwieldy and likely ineffective in light of the determination of those resisting the pipeline construction over sacred sites and threatening the water supply," said NLG attorney Jeff Haas in a press release.

Translation: Politics and oil money win over the First Amendment guarantee of free speech and right of assembly. A "disdainful judge" did not help matters. 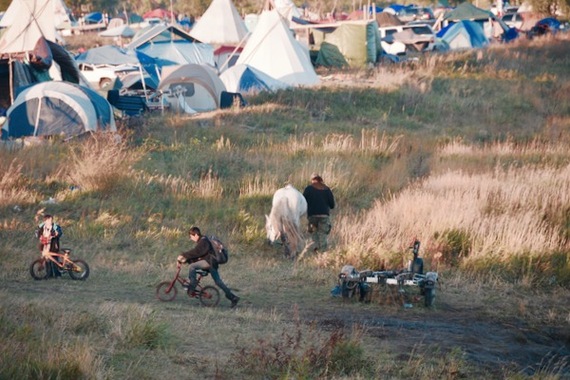 Oil interests have demanded protection from prayerful protestors with a loud voice, and the North Dakota Department of Emergency Services (Homeland Security) has requested $6 million in additional funds after spending $1.8 million so far. The Highway Patrol racked up $700,000 and the DES put in lots of overtime at $1.08 million. Someone might want to file a Freedom of Information Request on the bookkeeping, but it is not cheap to fly those Bell 206 choppers. Check around on the pricing and the average is about $1100-1500 per hour, but that does not include special surveillance equipment or night vision capabilities. North Dakota's DES is not running a frugal operation against all of those pesky clerics and ceremonial campfires.

Speaking of clerics, in a welcome but surprising move, the Bishop of the Dakota/ Minnesota Methodist Church, Bishop Bruce R. Ough, traveled to the encampment. His visit came one day after the DOJ and Corps' joint announcement put a hold on the DAPL until the Sioux Tribes' concerns could be mitigated, if at all. The grave desecrations and bloody attack dogs probably had something to do with the Obama Administration's ruling.

"It is with intentions of unity, peace and hope that I bring you a message of support from the United Methodist Church," said Ough. "I lift each of you up in prayer and will continue to do so daily. My hope is that you will not let the spirit of this gathering die. The United Methodists hope to work in a continued relationship to fulfill God's commandment to be stewards of creation, and maintain loving relationships with all of God's people."

Will Church and State get on the same page with respect to Mni Wiconi? It remains to be seen but the spirit of the camps seems strong.

In an unexpected but welcome move The National Nurses United, a member of the AFL-CIO, strongly opposed the AFL's decision to endorse the Dakota Access Pipeline. The labor union cites job creation as the reason for its support, but Nurses United President Jean Ross commended "the leaders and members of the Standing Rock Sioux, the many First Nation allies who have joined them, and the environmentalists and other supporters who have participated in the protests against the Dakota Access pipeline."

Learn more from this YouTube video uploaded by The Real News.

The Lakota/Sioux people are divided up into seven bands or council fires, and each share the same beliefs about the life giving force of water (Mni). If you are fortunate enough to visit this piece of history in the making near Cannonball, you will leave forever changed. The camps may go by several names, but are united in their determination to continue exercising their First Amendment rights of free speech and assembly through the brutal North Dakota winter if necessary.

Oceti Sakowin is most visible along Highway 1806 and this is where media gathers on a hill that offers the best and only reliable cell coverage. Red Warrior is tucked to the east and the Rosebud Sioux have tipis all along the south bank of the Cannonball River. Sacred Stones, the original encampment is less visible.

What matters is that all seven bands of the Lakota, although divided by treaty manipulations in the 1800's, are standing together with Indigenous Nations from all over the Americas and the world. These people have faced adversity for 500 years and know how to survive, but the courts and federal agencies seem intent once again on prolonging the suffering of a people who have been systematically robbed of their land and heritage. The Department of Justice may have issued an eleventh hour ruling on September 9 that halted the DAPL on Federal land, but did nothing to stop construction on private land. Make no mistake. We are talking about "private" land that is treaty land.

The Hill reports that the DAPL might be facing the same fate as the Keystone XL.

The political website says, "Energy Transfer hasn't publicly asked lawmakers to step in, and a spokeswoman declined to say whether it's something the company wants."

How many more generation of resistance will these people need to protect their heritage? How much more insult can any Nation take? 500 years is too much. Too much. But after many days spent at Standing Rock, I leave with no doubt that the noble fight for Mni Waconi will endure.