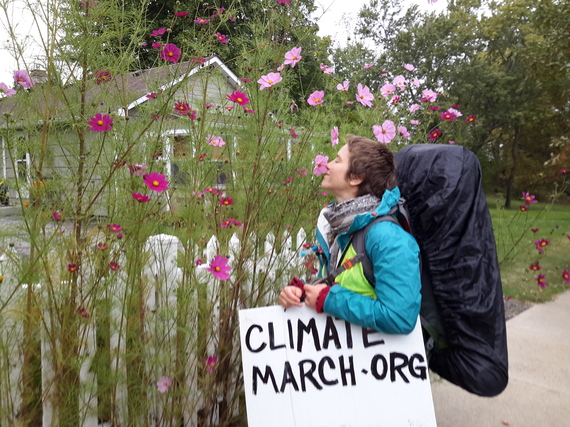 Sean Glenn, a 22-year-old student from Emerson College, stops to smell the flowers along the way during the Great Climate March. (Photo/Cheryl McNamara)

CCL's Toronto leader, Cheryl McNamara, spent a week on the road with the Great Climate March. Here's her report on the intrepid band of cross-country marchers:

In his seminal 1849 essay, "Resistance to Civil Government," Henry David Thoreau calls on the reader to: "Cast your whole vote, not a strip of paper merely, but your whole influence."

His words were top of mind when I joined the Great Climate March in Cleveland on October 5. More than 20 were then participating at that point, some having begun their journey in Los Angeles on March 1. They were walking primarily to raise awareness of the high carbon economy causing global climate disruption. When I joined them, they were three weeks from Washington, D.C., their final destination.

The quote resonated with those I spoke to. Sean Glenn, a 22-year-old theater graduate from Emerson College, joined the march in Los Angeles because the idea of embarking on a life and career that relied on a high-carbon diet depressed her.

Sean often walks barefoot during the march and carries her backpack, sometimes for as long as 20 miles in one day, rather than deposit it on the fossil-fuel powered gear truck. She told me that voting with your whole influence is "living your whole life with the values that you would propose others live by. It's important to put your whole life on the line, every part of your being and live true to what you see as solutions."

Like Sean, Ed Fallon is committed to marching the entire way across the country, despite aching feet and a back that could go out at any time. For him, walking is an act of leadership. A former Iowa State Legislator, Ed founded the March, raising enough funds to get it going.

"Anybody who calls for dramatic action in response to a problem needs to be willing to walk the talk," he told me. Two days prior to this interview, Ed didn't think he could continue; his feet were hurting so much. During my days with him, he did not give up, taking breaks to massage his feet.

"I get frustrated with my hard core political friends who regard any type of protest, march or anything like this, to be silly," says Ed. "It's all needed. When you build a house you don't want to just use a hammer or saw. Everything in that toolbox needs to be employed, especially when you're dealing with a challenge this great."

Ed reasoned that, aside from revolution, the only way to advance change is through the administrative, legislative and judicial systems, all cumbersome and subject to powerful special interests.

"Government will change only when there is enough pressure to do so," he says. "Look at the Voting Rights Act of 1965. That didn't happen because of Congressional leadership. That happened because a huge groundswell of public activists finally made it impossible not to change."

Despite not attracting the numbers he anticipated, Ed hopes that the Great Climate March will help build the momentum needed to transition the country towards a clean energy economy.

Marchers point to how their presence has galvanized flagging local environmental organizations. In some cases, they inspired citizens to start local coalitions.

The marchers met a few deniers, but not a lot. Primarily, the Great Climate March has served to educate people who have not connected local climate change to the global scale. Ed estimates the marchers have engaged in thousands of conversations throughout their journey and have reached thousands more through front-page coverage in local newspapers.

Often the people they meet, despite political alliances, are happy to host and feed them, or simply to listen. It seems that political posturing is more a Washington or state legislature phenomenon.

The marchers tell me that they have been listening too, hearing stories of hardship, frustration and resilience.

I heard such stories during my four days marching in eastern Ohio, an area impacted by fracking, a process where hydraulically pressurized liquid, which includes toxic chemicals, fractures rock to release natural gas. The process also often releases methane, a powerful greenhouse gas, into the atmosphere.

The county of Portage has become a dumping ground of chemical waste from fracking, which is also radioactive as it mixes with radium when it's fired underground. Companies, with the blessing of the Ohio government, are injecting this toxic brew into retired wells. I spoke to someone who is in the water-conditioning business in Portage County. He said ten percent of his calls are for chemical contamination.

Concerned Citizens Ohio is a four-year-old organization that's challenging local fracking and injection wells. Like grassroots organizations in neighboring counties and towns, such as Youngstown, it has been working on creative solutions to empower communities to reject these activities.

One solution is the Community Bill of Rights, which would give communities the power to choose what industry they want.

In Youngstown, the Community Bill of Rights is up again for vote on November 4 after being voted down three times. Community organizers put it on the ballot, partly because the very act of doing so stalls fracking in their area. During my walk into Youngstown, I saw fracking pipes rusting in a lot. A local activist explained that the pipes will continue to sit there, so long as the Community Bill of Rights is on the ballot. If he had his way, he would see his former steel town transform into a solar and wind production hub.

Citizens' Climate Lobby is training the climate marchers to lobby congressional offices when they arrive in Washington, D.C., on November 1, encouraging them to share stories like these.
On my final day with the Great Climate March, we marched through Youngstown to the church that would host us that night, our numbers swelling with local activists. Quite often we chanted: "This is what democracy looks like."

It seemed like a very Thoreau thing to do.

To learn more about the Great Climate March, visit climatemarch.org