I spoke with Yosemite Park Ranger Shelton Johnson, the head of the grassroots organization "African American Parks Event", Teresa Baker, and the head of the consulting firm, Earthwise Productions, Audrey Peterman, about the efforts being made to strengthen the connection between African Americans and the U.S. National Parks.

Since President Ulysses S. Grant signed the first national park, Yellowstone, into law in 1872, the national parks have provided American citizens and visitors from all over the world unique experiences with nature. The arches of Yellowstone National Park at the park entrance displays the Theodore Roosevelt quote, "for the benefit and enjoyment of the people." Despite Roosevelt's rhetoric, the national parks' missions have lacked focus towards African Americans for decades.

The first African-American park superintendent, Charles Young, was appointed superintendent of Sequoia National Park in 1903. The next would not be appointed until nearly 70 years later. Young led the 10th Cavalry Unit, also known as the buffalo soldiers, an all-black regiment. The cavalry became some of the first park rangers, helping to protect the parks and create their infrastructure into what they are today. African Americans played significant roles in the beginning of national park history, but few people know about them. There has been a lack of attention on the historical connections African Americans have with the parks as well as adequate funding directed towards engaging urban communities.

To bring the national parks to African Americans around the United States, Yosemite Park Ranger Shelton Johnson is helping to tell the history of the buffalo soldiers to the current generation. The loss of a legacy to nature has kept African Americans out of national parks. Yosemite Park Ranger Shelton Johnson explained, "If no one in your family and your community has visited a national park, how would you have any incentive to go to one yourself?" To help restore that legacy, Johnson has written a historical fiction novel about the buffalo soldiers, Gloryland, published by the Sierra Club in 2009, the first novel they published by an African American. 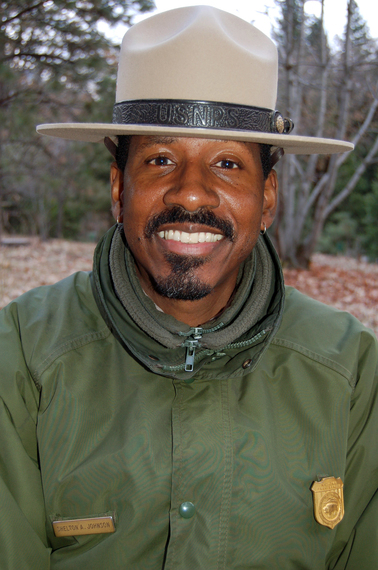 Johnson describes how he first became involved with the national parks:

"On my first trip to Yellowstone I was a creative writing student at the University of Michigan looking for new inspiration for writing while working on a book of poems. My roommate had an application to one of the concessions at Yellowstone and in 1984 I got a job as a dishwasher at the Old Faithful Inn. My arrival felt like a homecoming and I've been mesmerized by the parks ever since. The seeds of that inspiration stemmed from residing in Germany and England while my father was in the military and a family trip we took to Berchtesgaden National Park in Germany, which became a sister park to Yosemite in 2014. Being in the Bavarian Alps and looking down upon clouds drifting below me in the mountains stayed with me for the rest of my life. I grew up in inner city Detroit where experiences with nature were few and far between."

The National Park Service Comprehensive Survey of the American Public 2008-2009 measured "racial and ethnic diversity of national park system visitors" and found that African Americans were the most underrepresented demographic of visitors to national parks. The United States is steadily transitioning into a much more culturally diverse society with estimates that by 2050 half of all Americans will identify with a non-white racial group. Regarding the presence of African Americans in the national parks, Shelton Johnson states, "African Americans are still the least likely demographic to visit a National Park. Without their participation as well as other minority groups, the National Parks mission is jeopardized."

Leaders like Johnson have emerged outside of the National Parks Service to address the issue of the absence of African Americans in the national parks. Head of the grassroots organization "African American National Parks Event", Teresa Baker, is involved in outreach work with communities of color. Baker founded "African American National Parks Day" held annually June 7th. This past June, Baker organized a retracing of the buffalo soldiers trek from the Presidio of San Francisco to Yosemite National Park where over 200 participants camped overnight. In regards to providing urban youth with more wilderness experience, Baker states, " I think the best approach for the NPS to take, would be to partner with city parks for various nature outings, to increase their visibility."

The Fort Lauderdale-based consulting firm, Earthwise Productions, has been advising government agencies, NGOs and concessionaires on increasing the participation of urban communities in public lands, waters and environmental conservation for the past 20 years. After visiting 14 national parks over an 8-week period and meeting very few other African Americans, Audrey Peterman and her husband Franklin founded the firm in 1995. Audrey Peterman stated that in the past 20 years promoting the National Parks with her husband, "We've found that members of urban communities respond most positively to information and an invitation extended by a trusted source." To organize those trusted sources in bringing information about the national parks to urban communities, Earthwise Productions developed the Diverse Environmental Leaders National Speakers Bureau initiative in 2014. Most recently the bureau provided training to the staff of Grand Canyon National Park and their concession colleagues.

Audrey Peterman described the biggest challenge for these efforts is funding. Peterman cited the example that a few years ago her firm collaborated with Miami-Dade Congresswoman Frederica Wilson's organization, "500 Role Models of Excellence" to organize a trip for several young African Americans to visit Everglades National Park. Despite its success, the funding for transportation to organize similar experiences has not been available. Peterman states:

"It makes sense for the Park Service to collaborate with these organizations, helping provide funding through grants from the NPF and from the president's proposed budget of $20 million to connect urban young people to the parks. If the only entities that NPS supports are large external groups such as SCA and Sierra Club, the community leadership remains stunted. As we know, things grow from the root up, not from the top down."