Sitting through the world premiere of When the Drum is Beating at the Tribeca Film Festival this week, I thought to myself, at last: the definitive movie on the real Haiti. The red carpet was far from the abject poverty that is much of Haiti, but the quiet dignity and strength of its people was reflected in the faces of -- in fact, shone from -- the many Haitians attending. 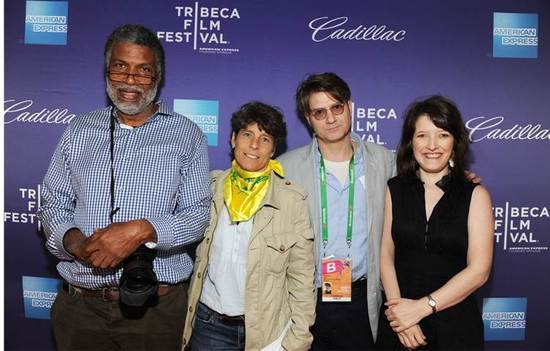 I first arrived in Haiti over Christmas vacation in 2001. I was working on Wall Street and wanted to save the world. I was extraordinarily apprehensive and wrote about my first trip. Ten years later, after having built orphanages in Gonaives and Jacmel, and having almost been killed by a mob there along the way, the earthquake struck and I just wanted to give up. 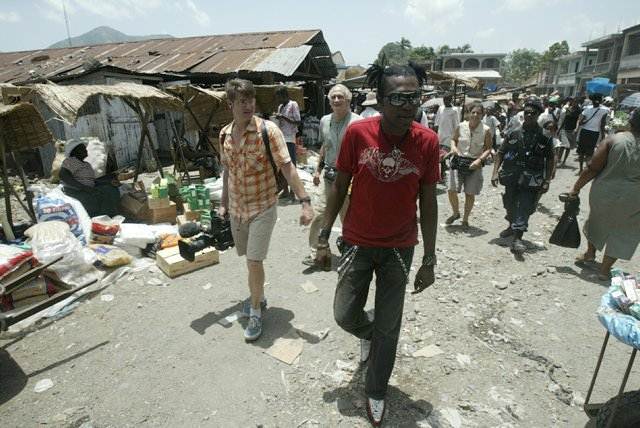 But watching the Haitian people refuse to give up gave me the courage to keep pushing. I have not been able to adequately express to my family and friends, with all of the negative imagery of Hollywood and CNN, my love of Haiti and its people. I tried writing "The Dichotomy of Haiti: Hell Meets, well, Heaven," but it wasn't enough.

Director Whitney Dow the Band Orchestre Septentrional and Tribeca Programmer David Kwok at the Q&A after the World Premiere of When The Drum Is Beating. Photo: Tracy Ketcher.

The film follows an orchestra -- yawn! -- but trust me on this, this is no ordinary band flick with bus tour. Rather, with gorgeous, vivid colors, the film puts the 63-year-old cultural institution known as Orchestre Septentrional in relation to the entire panorama of Haiti's brutal history up through its earthquake of January 12, 2010 -- and beyond. This movie shows how Haiti survives -- no matter what -- and will one day thrive. 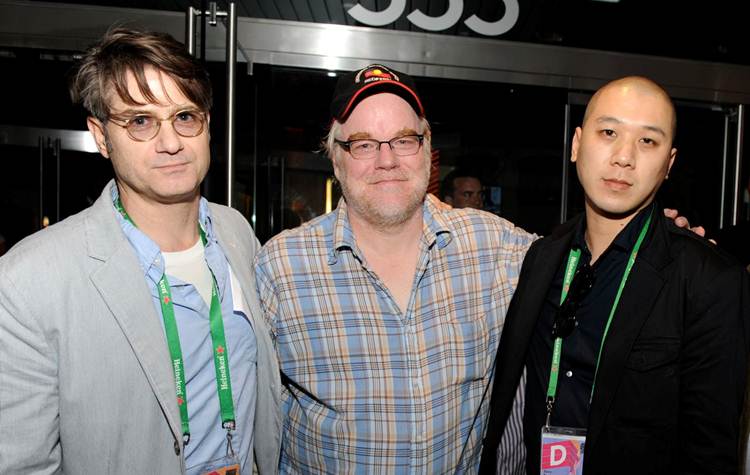 Director Whitney Dow with Phillip Seymour Hoffman and Tribeca Programmer David Kwok at the World Premiere Of When The Drum Is Beating. Photo: Tracy Ketcher.

Director Whitney Dow (Two Towns of Jasper) has done an outstanding job pulling this film together, and as I attended its world premiere this week at the Tribeca Film Festival, I was overwhelmed that Americans who perhaps don't particularly know Haiti rose to their feet in thunderous and long-last ovation of the 20 member orchestra who attended, as well as the director and the numerous others critical to the film's triumph.

I spoke to Whitney at great length after the film, congratulating him on this masterpiece. He explained to me:

I made this film because I wanted to give people a different access point to Haiti, a country that is so often defined by its poverty or political unrest, and saw music as a way in. Most Haitian stories on Haiti are about things that do not work, I wondered if you could learn more about the country by looking at something that had -- a band -- for an incredible 63 years. Plus the music is fantastic. We traveled through Northern Haiti with a trilingual crew, dragging generators, lights and recording equipment, to film these amazing concerts with audiences of up to 25,000 people. It was insane. 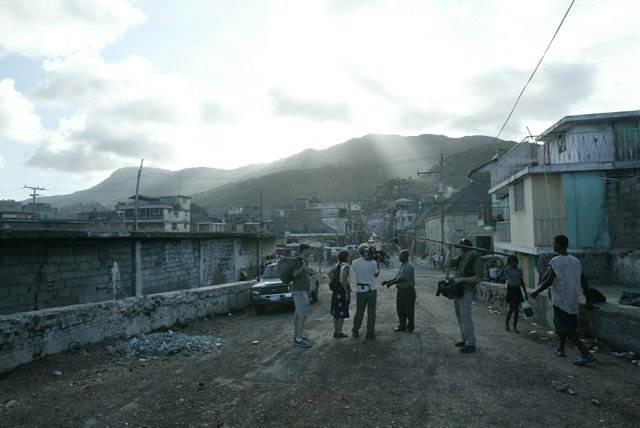 When the Drum is Beating in production in Cap-Haitian. Photo: Daniel Morel.

I chose to film in large format HD because I wanted people to viscerally feel what it was like to be in Haiti, a country most often seen in news footage. To truly understand what the band has accomplished by surviving for 63 years, you need to understand the context in which they live their day-to-day lives. I included history because you also need to understand the historical context in which they live. Let's be clear, the earthquake of 2010 was not a natural disaster, but rather a man-made disaster 500 years in the making. A lot of things are responsible for creating a place where 300,000 people could die in a matter of minutes -- colonialism, slavery, foreign intervention and failed homegrown leadership -- this is not a simple story.

The film does a terrific job of interpreting Haitian history, moving back and forth in time between the past and present, and gives broad context to the current problems facing the country: from the brutality of early French colonialism and the bloody revolution that brought Haitians their freedom to the crushing foreign debt and the 15-year American occupation that helped usher in the brutal dictatorship of François "Papa Doc" Duvalier. We see the hope that was created by the rise of Jean Bertrand Aristide, and the despair that followed the coup that drove him from power.

In the words of its production company:

Through its sweeping narrative, infectious music, tension-filled encounters and the musicians' passionate dreams, the film goes to the core of what makes Haiti one of the most fascinating countries in the hemisphere. When The Drum Is Beating allows the viewer to see, feel and hear the passion, commitment and joy of Septentrional's musicians, and through them, the unique Haitian spirit. 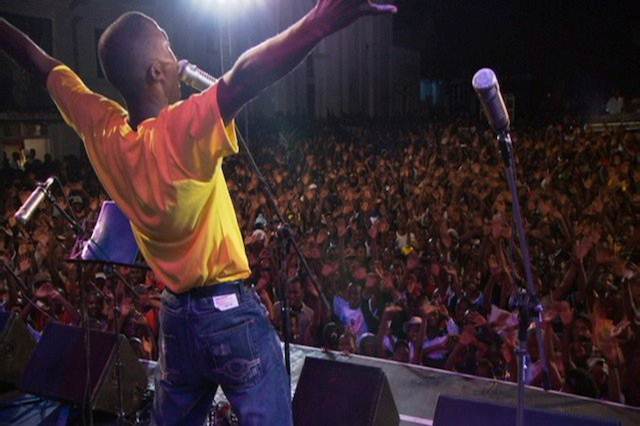 When The Drum Is Beating is a feature documentary that interweaves the extraordinary story of Orchestre Septentrional's six decades of creativity with the history of Haiti and how it went from being the first free black republic with a huge wealth of natural resources to a shattered country that cannot support its citizens.

Led by 80-year-old leader, "Maestro" Ulrick Pierre-Louis, whose son I had the privilege to meet at the New York world premiere, Septentrional's trumpeters, drummers, sax players and guitarists have made music through dictatorships, natural disasters, coup d'états and chaos, navigating the ups and downs -- the glory and the tragedy that is Haiti's history.

In a proposal for the film, Whitney wrote:

The orchestra embodies a particular Haitian trait -- the ability to find beauty in places of darkness -- which has helped Haitians survive in a place where nothing seems permanent except poverty and want. As they now face what is perhaps the country's greatest tragedy ever, the earthquake that killed almost 300,000 in January 2010, they must find the strength to go on. 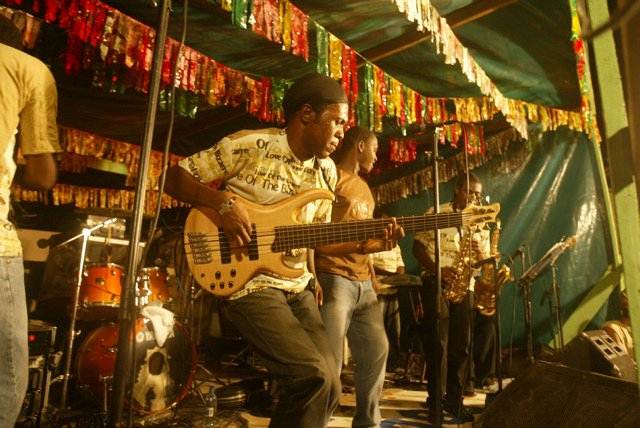 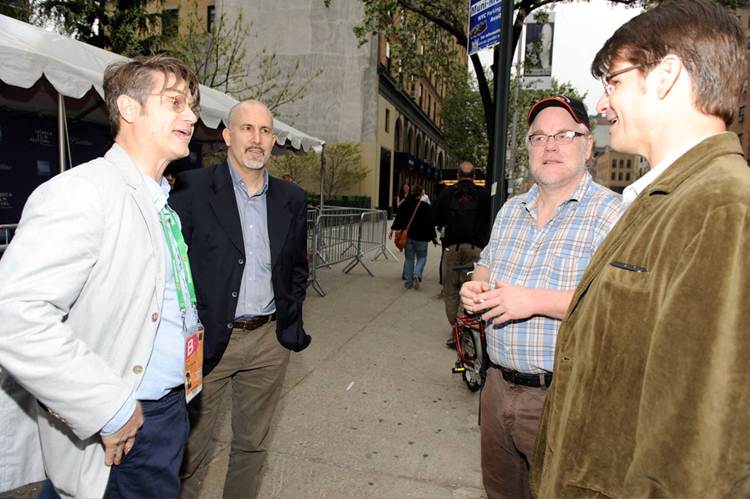 Director Whitney Dow, legendary Philip Seymour Hoffman and Oliver Dow of the New Group at the Premiere of When The Drum Is Beating at Tribeca. Photo: Tracy Ketcher.

The story of Septentrional and its continued existence in a place where little survives -- not governments, monuments, art works, cities, lives nor even the very landscape -- is uniquely Haitian.

As the afterparty wore down, Whitney concluded by telling me that, "it was incredibly inspiring to see a group of artists who, in a country where many are looking for their next meal, are working to perpetuate an institution beyond their own participation. This is rare to see anywhere in the world, but extraordinary in a country like Haiti. "

Back in college I studied in Japan, teaching English in a junior high school. My university used the institution of the school to serve as a microcosm of Japanese society. I learned more about Japan during that year than in any other year there. 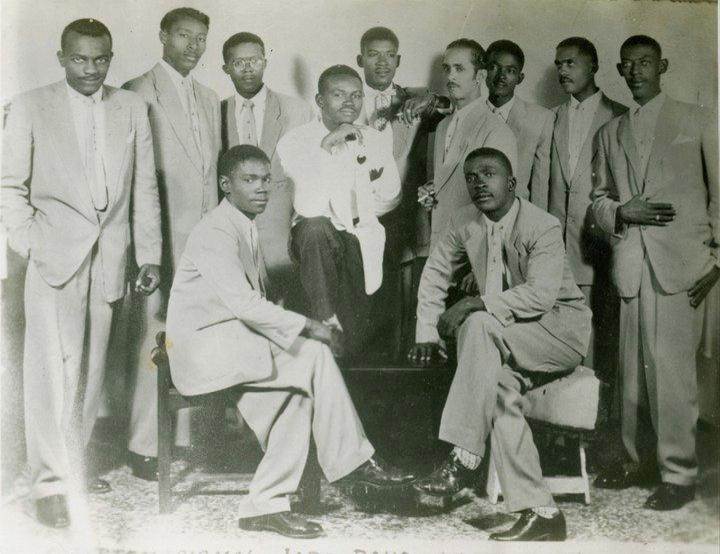 In the exact same way, Whitney has focused his lens on one of the few surviving institutions in Haiti -- Orchestre Septentrional -- and explains Haiti to the viewer in a way that neither condescends nor romanticizes the heaven-and-hell that is Haiti. This film is perhaps the biggest surprise at the Tribeca Festival: it is the best film ever produced about Haiti. 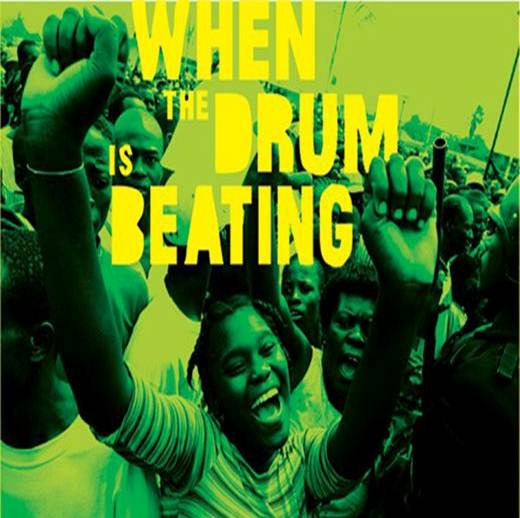 When the Drum is Beating
2011 | 84 min | Feature Documentary
In English, Creole with English subtitles
Co-production with Independent Television Service (ITVS) in association with the National Black Programming Consortium (NBPC) with funding provided by the Corporation for Public Broadcasting, and produced in association with TV Ontario, with additional funding provided by the Sundance Institute Documentary Film Program. It is slated for a PBS broadcast in 2012, and was an official selection of the 2011 Tribeca Film Festival.
Facebook | Donate

When the Drum is Beating trailer from Whitney Dow on Vimeo.