These are a few of the things -- mostly pretty -- that come to mind when you say "Switzerland."

But now thanks to a recent popular vote on a controversial referendum, things like "intolerance," "paranoia," and "limitations on freedom of religion" have joined the merry list.

In case you have not heard already, 57% of Swiss voters approved a proposal Sunday to ban mosque minarets in a nationwide referendum sponsored by the Swiss People's Party (SVP), a right-wing group long known for its anti-immigration campaigns. A complacent Swiss government subsequently stated that it will "respect the decision" of the people and will affect the ban on all new minarets in the country. 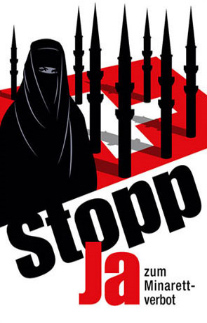 The SVP flooded the tiny landlocked Alpine state with posters in which minarets appeared as missiles rising from the Swiss flag. They told voters that "the minaret is a sign of political power and demand, comparable with whole-body covering by the burqa, tolerance of forced marriage and genital mutilation of girls." This is not true of course.

Most Muslims accept the minaret as an architectural conduit for the call to prayer, but most do not seek political power, subscribe to the burqa, tolerate forced marriages, or accept genital mutilation of girls. Forced marriages and female circumcision happen mostly in poor, uneducated parts of the world and have no foundation in Islam. The burqa is worn by less than 1% of Muslim women. How these three things are "comparable" with a minaret must be Switzerland's dirty little secret because I cannot figure it out.

Yet by casting the minaret, a mainstream symbol of normative Islam, as some kind of Trojan horse bearing the Achilles heel that will vanquish Swiss political and cultural hegemony, the SVP seems to have petrified people into a knee-jerk acceptance of a draconian ban that amounts to throwing out the baby with the bathwater.

While the ban has dismayed Muslims, it should also embarrass Switzerland whose polished image will likely take a major beating. The Swiss logic here is as arbitrary and nonsensical as if Dubai were to ban skyscrapers because they "represent American corporate greed which is partially to blame for the misguided war in Iraq." Imagine the scornful reaction around the world then. 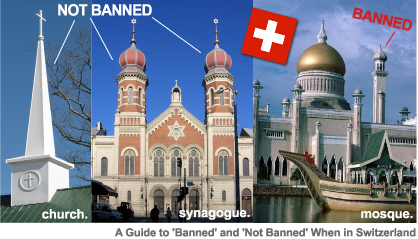 Personally, I have vacationed in Switzerland many times. I have taken the famed glacier express from St. Moritz in the West to Zermatt in the East, climbed the Matterhorn in the Alps, enjoyed promenades in the Boulevards of Geneva, and walked among the rooftops of Zurich and Neuchatel. I found the Swiss to be generally pleasant (though somewhat aloof). It is beyond me why such a beautiful country would choose to take a turn for the ugly. Swiss Muslim Professor Tariq Ramadan says it is fear. Perhaps, but it is more than that. It is also cluelessness. Fear is not always such a bad thing; the Swiss had every right to fear the Nazis. But to ban an architectural form that scares you is a thing of prehistoric naiveté. Worse still, to be ignorant of what a minaret truly symbolizes -- to the tune of some 57% of voters -- signals that the wrong people are talking and a clueless majority are listening and following.

The minaret has been around, appropriated in the unique architectural traditions of every culture, for 14 centuries. Sure there are minarets that surround the Taliban, but minarets also surrounded the scholars, philosophers and scientists of Baghdad, Damascus, Tashkent, Seville, Toledo, and Cordoba whose body of work helped jumpstart Europe out of its dark age and into its renaissance. They surrounded and still surround the students of the oldest surviving university in the world, Al-Azhar of Cairo. They dot the skylines of cities from Casablanca to Brunei, and Istanbul to the Zanzibar, calling their peaceful residents only to God-consciousness. They adorn the four corners of what is widely considered to be the most beautiful man-made structure on earth, the Taj Mahal of India.

For as long as most people living today have been around, Europe has enjoyed a stint as a tolerant, liberal hub of multiculturalism, personal freedoms, and all-around prosperity. But suffer from historical amnesia at your own risk, for history has a ruthless tendency to repeat itself. Before we get too comfortable and fully let our guard down, we may do well to remember that it was not so long ago that the tame territory of delectable delights, chocolate, wine, and cheese was engulfed by fascist ideologies that were anything but. Indeed, it was only as recent as two generations ago that those nations, who today fancy themselves as the defenders of freedoms around the world, were the purveyors of extreme brands of racism, uber-nationalism, and imperialism that launched the world into two destructive global wars and history's most egregious genocide.

Given the burden of Europe's recent past, it is astonishing to note how readily Switzerland, itself a long-time haven of neutrality even during World War II (not exactly a great thing when you consider that human beings were being huddled into gas chambers North, West, and East), could teeter at the precipice of an eerily familiar abyss wherein citizens of a hapless religious minority are demonized and their rights freely limited.

Sadly Switzerland's minaret vote is not the only troubling omen facing Europeans today. While the winds of fascism are not exactly sweeping over Europe as I write, a few unwelcome breezes seem to be intensifying and cannot be ignored. The other Semites, Muslims, are in the eye of the storm this time around -- Jews having borne the brunt of the last tempest. For Europe, "Never Again" seems to be a slogan for one religious minority at a time.

Let me be clear, the situation of Muslims in Europe today cannot be analogized to that of Jews 70 years ago. But those familiar with European history know that the zenith of 20th Century anti-Semitism was not born overnight. It evolved over time eventually reaching grotesque proportions. At first, a vanguard of voices claiming unique insight and expertise on Jewish affairs sought to "wake society up" to "know" and "confront" the nature of the threat festering in their midst. This involved columnists, preachers, politicians, and yes cartoonists. Jews were caste as the other, foreign implants who can never be fully European regardless of whether or not they were citizens working and living side by side with everyone else. Their religion was judged as too exotic, too sinister, an anti-European ideology that could not be trusted. Their history was recast into a carefully crafted narrative of perpetual anti-Christian mischief. At first, their religious rights were curbed, and then they were rendered second class citizens. Things quickly dwindled thereafter.

Today, I cannot help but wonder: had it not been for Germany's tolerance of the demonization of Jews in the early decades when it then seemed mundane and uneventful, would a crime as outlandish as the "final solution" ever have found the mass acceptance that it did further down the line?

Worth mentioning is that despite the lessons learned from the Holocaust, Europe's only indigenous Muslim minority could not itself escape genocide a few decades later -- the first and only genocide to occur on European soil since World War II.

So what about today's breezes of intolerance whisking through the continent? 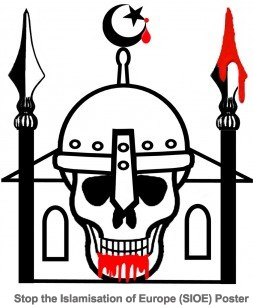 In the United Kingdom, the far-right British Nationalist Party (BNP), a splinter group of the Whites-only British National Front (BNF) is experiencing a new surge. The far-right Dutch Party for Freedom, whose leader Geert Wilders advocates banning the Quran and curbing Muslim religious freedom, placed second in a recent election in the Netherlands. In France and Austria, far-right political groups spouting anti-Muslim rhetoric are also gaining ground. The SVP, the group behind the minaret ban and a poster campaign depicting white sheep kicking black sheep out of Switzerland, is now Switzerland's biggest political party. Reports show that racism is on the rise in Switzerland and elsewhere in Europe. Astroturf groups that openly call for the demonization for Muslims such as ACT! for America, SANE, SIOA, and SIOE are becoming a dime a dozen. Vandalism of Muslim cemeteries and mosques and hate crimes are happening more frequently. In Germany, a Hijab-wearing woman was stabbed to death in front of her three-year-old child while seeking justice in a German court against the perpetrator who had hurled racist slurs at her in a public playground a few days earlier. Stephan Kramer, General Secretary of the Central Council of Jews in Germany subsequently deplored the "largely unchecked hate propaganda against Muslims." Throughout Europe, anti-Muslim rhetoric expressed in editorials, columns, campaign ads, hate blogs, and political cartoons is on the rise.

Cynics often deflect attention by pointing out human rights abuses in the Middle East or Asia. The West is right to call out abuses of freedoms in the Muslim-majority world, but it is wrong to pursue a campaign of reciprocity that betrays its own principles as a response. Western Intellectuals are wrong to turn a blind eye to such a farce when it occurs.

The Swiss referendum raises an important question about the great conundrum of democracy: if a majority of voters opt for dictatorship, is the result a democracy or a dictatorship?

The answer lies in a simple concept: the constitution. The constitutions of democratic nations enshrine the principles of freedom and democracy and act as the final say on what future action can and cannot be done. A vote that betrays those principles is a vote that ought not to take place. In other words, a referendum that seeks to curb religious freedoms presumably protected by Swiss high law is itself unconstitutional and should not have been allowed in the first place.

Should the West choose to remain reactionary in how it deals with Muslim extremism -- real or perceived -- then it unwisely relinquishes its fate to the hands of terrorists who know that it would only then take a few more attacks to sink Western societies into self-defeating frenzy. Make no mistake about it, merely inflicting explosions that tear down towers of steel and glass is not terrorism's ultimate goal or greatest threat, being a catalyst for Western self-implosion is. While the West needs to remain vigilant against physical threats, it needs to know that its greatest weapon against ultimate defeat is holding steadfastly unto its principles of democracy, freedoms and equal citizenship.

Protecting and strengthening those traditions, integrating minorities as equals in society, and working academically to fight extremism, both Muslim and anti-Muslim, is our best assurance for future security and prosperity. Failing to do so spells the beginning of the end.