It's no secret that the South by Southwest festival has become a major go-to platform for all things music, spectacle and branding and every year Austin locals celebrate and brace for March when the city will be bum-rushed by 30,000 people on work/play vacation. It's a time when sponsored parties venues are hot as Super Bowl ad space, businesses bring their marketing A-game and nothing is too outrageous. Over 2000 bands fly in for the chance to play in anything from a bar to a church to a barnyard. To actively participate in the 10 days of festivities usually results in weariness and exhaustion from another dimension, but inside the mayhem are memorable sparks of genius that inspire my return every year.

For 2013, noteworthy activity started off at the beginning of Interactive with a visit to the one and only Grumpy Cat, who was camped out and accepting visitors at the Mashable tent. The meme brought to life attracted some of the longest lines I saw throughout the entire festival as fans lined up by the hundreds to take a picture with the frownie-faced feline. Although at first I was confused by the draw, upon approach, her powers worked on me as well as I was able to catch her in somewhat of a demo (see pic below). Tardar Sauce (her real name) became the talk of the town all week and I'm here to report she is very fuzzy, quite cute and just as grumpy looking in person.

Clearly marketing in general was a huge deal with lots of dollars behind it and despite the fact that Doritos built a stage with their logo on it the size of a building, the trend was for smaller-scale, thoughtful activations to come out on top in the memorable experience department. Paste Magazine and Sennheiser, for example, hosted a smart and integrated lounge at a bar on Rainey Street, where they had a panel of interactive industry experts, actors and musicians come by for onsite interviews. To hear the conversation, interested parties could pick up a pair of deluxe Sennheiser headphones, while free beer flowed and music played throughout the rest of the bar. That day I heard from Axel Alonso, Editor and chief of Marvel Comics, John and Brenda Romero, the creators of video game Doom, and an impossibly cute Brie Larson from the movie 21 Jump Street all while sipping on a Tito's and soda. It was easy to enjoy, even for someone who doesn't know much about comics or gaming, and a clever way to tie the brands together.

The Sonos Studio at SXSW also got it really right and produced an under-the-radar spot that turned out a bunch of happy campers. In their set up, tucked away at a house next to the convention center, Sonos and Patrón hosted a laid back hangout with free food courtesy of yummy local trucks, solid performances from great acts like Poolside and Cloud Nothings, complimentary cocktails, clean places to sit, a fountain enticingly filled with cans of ice cold beer, nighttime movie screenings and a build-your-own-functional-Sonos-Speaker station, making for delightful arts and crafts engagement. Each day they also did a KCRW radio broadcast, offering something for everybody and enough space to appreciate it.

As for the music, there were big payoffs in my "go where the wind takes me" festival strategy, particularly when the breeze blew me smack into the middle of a private event that realized the backyard BBQ of my dreams.

The gathering took place at the small and beautiful Hotel St. Cecilia in South Austin, where upon check-in, the tall white gate opened into charming serenity complete with a lush lawn of vibrant green grass and large oak trees. A crowd of about 75 artist and industry types lay strewn about on picnic blankets under the perfectly blue sky, in front of a small mic set up while folk artist Nataly Dawn sang sweetly for the opening act. Truly excellent tacos and cold beer were ubiquitous as the day progressed and reached a climax with heavenly performances by Emmylou Harris and Rodney Crowell, Devendra Banhart and Iron & Wine.

I sat in the grass about five feet from these extraordinary artists in a setting so peaceful I was afraid to crunch my tortilla chip during their sets. I won't soon forget Harris and Crowell singing a soulful rendition of "Love Hurts," Banhart seductively crooning tracks from Mala in Spanish or Sam Beam nonchalantly singing an acoustic version of "Trapeze Swinger" so paralyzingly beautiful I swear I didn't breath for the whole 7 minutes. It made for a hands-down highlight of the week and one of the best kinds of "only in Austin at SX" afternoons.

As for the rest of the week, there was magic in the chaos as well. To name a few: It gave me chills to hear the harmonies of The Lone Bellow, a breakout and incredible live Folk/Rock act who had 13+ performances during SX and are probably on the path to success a la the Lumineers. Schoolboy Q entertainingly kept it real at the Fader Fort with his energetic hip-hop performance and the moment he put the show on hold to allegedly grab a number for good weed off the phone from a random fan in the audience, before handing it back to him and declaring "you need to update that shit! This is the 4!" At Perez Hilton's party Lissie brought down the house, even with a fading voice, and closed out strong with popular Kid Cudi cover/singalong of "Pursuit of Happiness". An ecstatic, gracious, and passionate Macklemore & Ryan Lewis lived up to the hype and bounced of the walls for their final performance of the fest, with a short set similar to the one on the Tiny Desk that made me fall in love with them in the first place. King Tuff crushed it at the Sailor Jerry Party, while crazy pant folks in the audience lined up to throw darts for a free tattoo. A tiny Brooklyn band called Whisky Social sang their rendition of the Sword's "Heartbeats" from the porch of a dilapidated house, with a version to lovely it attracted many who passed by and conjured a casual scene strait from the South By's of yore.

There's nothing quite like the volume of the brilliant and unpredictable experiences at SXSW and it's near impossible to predict when they will be other than in a short span of time. A week out, for instance, Prince announced a performance for the final night, where he apparently gave a 2.5-hour show for the ages, with six encores and a 12-piece brass band for 300 lucky souls, and that seemed like advance notice. The pressure to rally often pays of in spontaneous ways, both rare and ridiculous, making this Austin festival one of a kind. 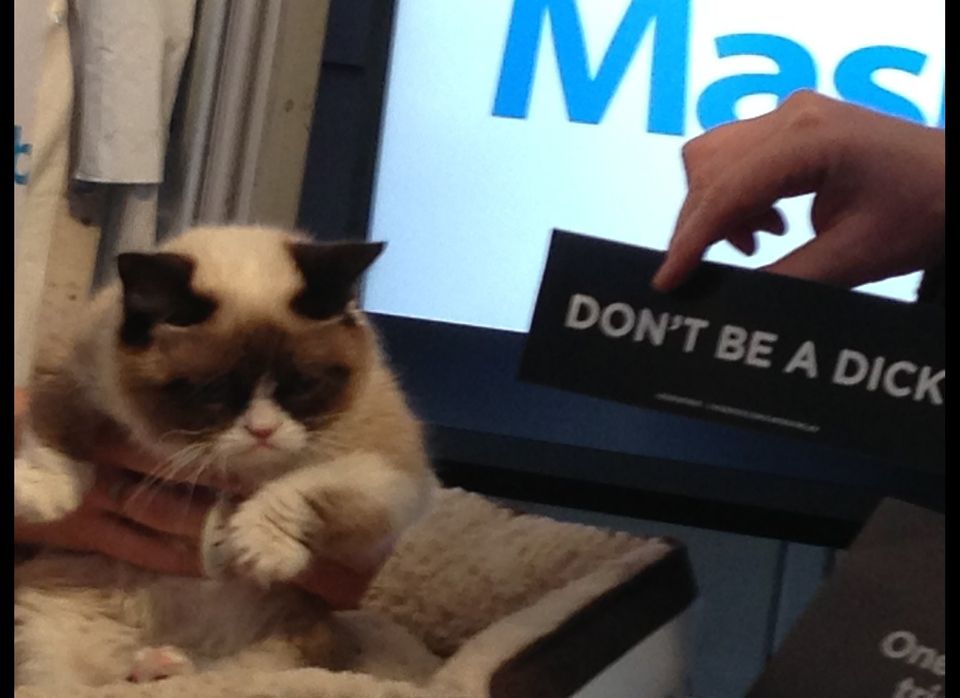 1 / 9
Grumpy Cat at Mashable
Grumpy Cat in the flesh and giving attitude at the Mashable Tent, attracting a line of people that wound around 2 blocks. Photo credit: my phone