Two years ago, 19-year-old Aziza Violin left Syria, where she lived with her father, mother and sisters. "The war made it impossible to stay there," she said.

Like thousands of other Syrians, Violin ended up in Brazil, more than 6,000 miles away from Damascus, the capital city of her home country. She was a good student, but she dropped out of school to work at a store in the neighborhood of Brás, São Paulo. Violin didn’t speak "a word" of Portuguese until she started working.

Damascus-born Talal Al Tinawi also decided to migrate to Brás, at the suggestion of the Brazilian Embassy in Beirut. "São Paulo is where the money is, where the jobs are," Al Tinawi, who studied to be a mechanical engineer, said. During the Syrian civil war, he spent three and a half months in prison, after the Syrian government mistook him for a suspect with the same name. That was the last straw for Al Tinawi. Shortly after, he travelled for 27 hours to Brazil, with his wife and their two children.

Brazil is now home to 8,400 refugees, according to data provided by the National Committee for Refugees, or CONARE, an agency affiliated with Brazil's Ministry of Justice. Even though this figure is equivalent to 1 percent of the number of refugees that Germany expects to receive this year, the number living in Brazil has almost doubled since 2010.

Brazil is not a common dreamland for refugees, but those who do come usually have a support network to rely on, according to Rita do Val, a consultant on programs for refugees and a professor of international relations at the Santa Marcelina College. Brazil is the second largest recipient of Syrian refugees in The Americas, after Canada.

Even though he had no friends or acquaintances in Brazil, Al Tinawi found support in the Syrian community there. He lived, for three months, with a fellow Syrian, who helped him as he enrolled his children in school, found an apartment and took Portuguese lessons.

Despite the presence of a support network, language is the biggest obstacle Syrians face in Brazil, according to Larissa Leite, a project coordinator at Caritas. "When you are unable to communicate, you can't even absorb the cultural differences," she said.

Culture shock is quite common, explained Leite, and it is experienced by the refugees and the local communities they settle in. "The role of women here, for instance, is very different. Although Brazil is an open-minded country, locals find it odd when they see Muslim women dressed in the veil, which has repercussions when migrants look for jobs," Leite said.

Al Tinawi is concerned about the cultural differences. He is particularly worried about his seven-month-old daughter, Sarah, who was born in Brazil.

"According to Islam, women must cover their hair and have no physical contact with men,” he said. “I like Brazil, I want to live here and I want to fit in. But I don't want my children to be like Brazilian children, because my religion doesn't allow it.”

When Aziza Violin left Syria, she was one year short of graduating. Last week, she returned to the classroom to complete the final year of her secondary education at a São Paulo school.

The young woman cannot hide her desire to one day return to Syria, where her father still lives and works.

"I miss everything. My school, my friends, my father, even the streets," Violin said. "Everyone wants to go back, but it is difficult." She mentioned that she lost a friend in the war. 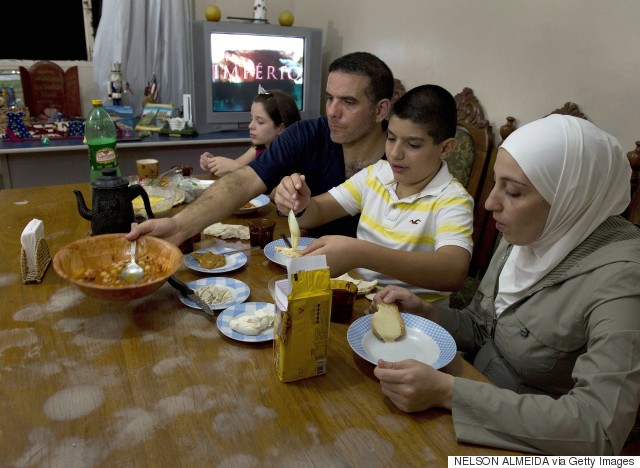 Syrian refugee Talal Al Tinawi has dinner with his wife Ghazal and their sons Yara and Riad at home in São Paulo, Brazil on March 4, 2015.

Al Tinawi, on the other hand, has ruled out the possibility of living in Syria again. But he would like to go back to visit his 75-year-old father and his brothers, who stayed behind in Damascus. For a while, Al Tinawi worked at a street market, where he sold children's garments. Now, he is focusing on his growing catering project.

"I organized a birthday party for my daughter, and two volunteers from Adus (an organization that offers aid to refugees) attended the party, and raved about the food. They told me that Brazilians like Arab food, and created a website where I could publicize my catering services and take orders."

After national media highlighted his work, Al Tinawi’s orders jumped from two or three a week to two or three a day. With the help of volunteers, he created a crowdfunding page to raise money to open his own business.

The number of asylum seekers coming to Brazil has dramatically increased since late 2013. In that year, 284 Syrians requested Brazilian visas. In 2014 the number of visa requests jumped to 1,183 -- all of which have been granted. So far this year, Syrians have submitted 890 applications, according to CONARE.

The increase in visa requests didn't happen by chance. CONARE’s Normative Resolution No. 17, which facilitates visa issuance to Syrians, went into effect on Sept. 20, 2013. Syria's civil war has been ongoing since 2011, killing more than 250,000 people and displacing more than 10 million. CONARE's resolution is valid for two years, but the government has already hinted that it will be extended.

Facilitating visa issuance is a strategic move do Val said. "Ideally we should organize this migration, because we will be better prepared,” she explained. “We will be able to tell how many people would arrive and then we would be able to receive them in a more adequate manner."

While Brazil is dealing with a growing, although small, flow of asylum seekers, Europe is experiencing the largest influx of refugees since World War II. More than 473,000 people crossed the Mediterranean Sea this year, and approximately 40 percent of them were from Syria, according to the International Organization for Migration.

As European countries tighten their migration policies, Brazil will continue to establish itself as an immediate alternative for those fleeing conflict, do Val said.

"Additionally, the integration between refugees and society would be much easier here than in countries such as Germany and France, which have a history of xenophobia," she said. "As a country of immigrants, Brazil is willing and destined to welcome these refugees, which makes the integration easier and simpler than in Europe.”

This article first appeared on HuffPost Brazil and was translated into English. It has been edited for clarity.