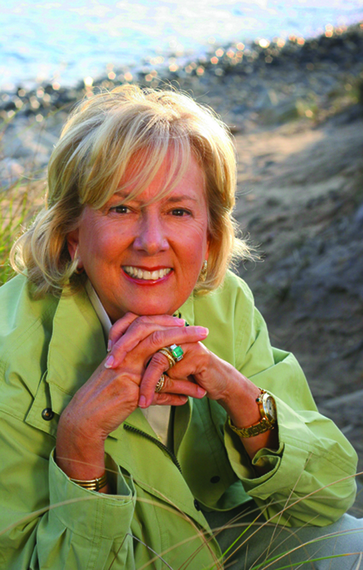 Linda Fairstein needs no introduction. For more than two decades, this former prosecutor was Chief of the Sex Crimes Unit of the Manhattan District Attorney's office. She tried many "ripped from the headlines" cases and is considered America's foremost legal expert on sexual assault and domestic violence.

Her 15 previous Alexandra Cooper novels are international bestsellers and have been translated into more than a dozen languages. Her 16th is Terminal City, a suspense potboiler, once again featuring prosecutor Alex Cooper and her team who are in a frenzied quest to track down a serial killer who may be a mass murderer and terrorist.

Terminal City takes place in and around Grand Central Terminal. As in many of your novels, the story reveals fascinating things about a great New York City landmark. Tell us some of the hidden secrets of Grand Central Terminal.
I've always been intrigued by Grand Central Terminal, having grown up in Mount Vernon, a suburb of the city. It was my gateway to New York, coming in as a kid with my mother to go to the theater or shopping. As a child, the colossal size of it captured me; and as I grew older, its majestic appearance astounded me. In writing this novel, the opportunity to have private tours and get behind the scenes of the terminal was a thrilling experience.

I toured the terminal with an architect from the firm that did the magnificent restoration. The blueprints showed entire sub-basements, some going down 10 stories into the earth, and secure rooms upstairs, that don't appear on the original blueprints. That's because there was a concern for security when the terminal was designed a century ago. Presidents and dignitaries came to the terminal and were escorted directly to their hotels via underground passages.

The need for security became even more apparent during World War II, when Hitler realized he could paralyze U.S. troop movements on the eastern seacoast, if he could destroy the basement area of Grand Central Terminal where all east coast trains were controlled.

The hidden places within the terminal are very exciting to see. Though the book is named Terminal City, I wasn't aware that when the terminal was designed, the plan was to have an underground city within Manhattan, so a traveler could disembark from a train and walk underground to a hotel room in the Waldorf, or the Yale Club. The terminal was built to encompass an entire underground city of many acres. This was a complete surprise to me and became a device to use in plotting bad things in the novel.

What about the mole people?
I always believed the mole people were little more than an urban myth. I was shocked to discover there really is an underground colony of people, most with severe mental illnesses. The ancient tunnel structure has corroded over time. Much of the material of the tunnel walls has decayed over the 100 years, and there are "apartments" carved into the walls. The residents call them "condos." Homeless people can enter through sewer gratings and obscure entrance ways no one knows about. These people have their own mayor and regulations. Many of them use sprinkler pipes for water and electrical wire to screw in light bulbs. It's not only true of Grand Central Terminal, but others as well. There's a network of tunnels connecting from Penn Station to the Hudson River. So, there really is an underground New York.

This is wonderfully described in the context of the novel. It was like an incredible tour through this landmark. Do you do this with each novel?
I began doing it in the second book, Likely to Die. It was set in Bellevue Hospital. My office handled a case in which a young doctor was killed in her office, while working late at night. The killer was a homeless man living on the hospital roof. He slept during the day, and at night, went to the laundry area, would find a white lab coat, put it on and walk the hallways, completely unchallenged. He got food from discarded trays. On the night of the attack, he sexually assaulted the doctor, and then killed her.

I used the hospital as a metaphor for the city. In those pre-9/11 days, there was no security at all. There were thousands of patients, medical and nursing staffs, florist deliveries, linen and food deliveries and thousands of people going in and out, all of whom could be potential suspects. As part of my own self-branding, I decided it would be interesting for readers to come away from my novels having learned something in addition to having been entertained. So, I'll take the reader behind the scenes of a New York City landmark, while balancing the interesting things about the place, with the novel's pacing.

You may be the quintessential embodiment of the adage, "Write about what you know." Am I correct in assuming many cases in your novels are based on ones you've actually tried?
I've never used a case I've tried in a novel, but I draw heavily on those cases for motives, character traits, and other aspects of the books. I love taking bits and pieces from actual cases and seeing if they fit into the novel's narrative arc. Part of what occurs in Terminal City is taken from the profiles of the Boson Marathon killers. I clip crime stories from everywhere across the country. I have notebooks filled with these crime stories--enough to choke a whale. I love taking a kernel out of a crime story and doing that "What if?" thing.

One of the most dramatic scenes in Terminal City takes place between Alex and a defense attorney during an arraignment. The colloquy was electrifying. Are you most comfortable writing courtroom scenes?
I think I'm most at home writing dialogue. As an English literature major in college, I was comfortable writing descriptions and atmosphere, but I was far more comfortable with dialogue, especially when I sat down with Alex Cooper. I just channel myself right there into the courtroom setting. It simply flows. I put myself in her head; her words are my words. I just love court routine and I can put myself there in a heartbeat. I can read something in a newspaper--like the recent cannibal cop case--and then create the dialogue to reflect the way I would handle the case.

Do you ever refer to actual courtroom transcripts when writing certain scenes?
I've never done that. I might someday--from cases back when I was a 32-year-old prosecutor. But you know, I'll probably end up saying to myself, "I write it better now than it actually was taken from reality." I'd rather make it up. You know fiction can be better than real life.

There's a great deal of sexual tension between Alex Cooper and Detective Mike Chapman. It's been going on for 10 years. Have you planned where their relationship is going?
Yes. I've been thinking about it and it will be something very interesting. I can tell you that 15 books into the series, the issue that's of number one importance to my readers is: what's going to happen between Alex and Mike Chapman? (laughter) At any book signing--whether six people or six hundred are there--that's one of the first questions asked.

Who are the legal scholars or judges you admire most?
I follow the Supreme Court closely. I personally look up to people like Stephen Breyer. One of my favorites is Sonia Sotomayor with whom I worked in the Manhattan DA's office. I look at her with special pride. I wish I could write like Oliver Wendell Holmes (laugher). There are so many judges on the Supreme Court, Criminal Term, in New York City, who shaped my career as a young lawyer. Judges Irving Lang and George Roberts, along with others, come to mind.

Now, many of my former colleagues in the DA's office are people I admire greatly: Ann Donnelly and Mark Dwyer who are sitting judges. I always read the New York Law Journal, in part, looking for criminal motives and new ideas for novels, and also hoping to find the elegance of language with which some judges write. It's just wonderful when you come across beautifully crafted opinions.

In your spare time, what do you enjoy reading?
I always have books in hand. I usually read non-fiction and fiction at the same time. I read crime fiction and thrillers--and did even before I began writing fiction. I love the genre, but also want to see what my friends and my competition are up to. (laughter). I love good thrillers and suspense novels: Michael Connelly, Harlan Coben, Lisa Scottoline, Lisa Gardner, Robert Crais, and lots of others. I was an English lit major in college, so I intend to read all of Anthony Trollope before I die. Now that I'm travelling on tour, I'll be reading a great deal of crime fiction. I can't read it when I'm at home writing because I'm afraid I'm going to subconsciously steal dialogue or be influenced by another writer's style.

What's next for Linda Fairstein?
I've got the location for the next one. It's a landmark not nearly as well-known as Grand Central Terminal. There's going to be a very dramatic turn of events for Alex. You'll have to wait to see what happens.

Congratulations on your sixteenth Alex Cooper suspense novel, and thank you for casting a fascinating spotlight on a great New York City landmark, while telling a compelling story.