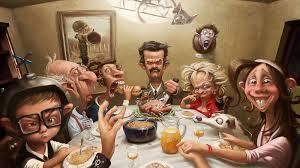 Most of the time we can avoid those people in our families who stress us out and unhinge our most aggressive tendencies. Thanksgiving is the exception. All over the country, parents, siblings, aunts, uncles, cousins, in-laws and outlaws will be gathering to traditionally give thanks around a table overflowing with both rich foods and alcohol-laced drinks. With the recent election results looming large, how gracious, dignified and enjoyable will that dinner table atmosphere be?

Dr. Nat is thrilled that Obamacare is being tossed. Cousin Roz is terrified her transgender son will be attacked and vilified. Aunt Cindy is a wreck over the possibility she could lose her illegal immigrant nanny. Cousin Jason is overjoyed that once again the glass ceiling hasn't been shattered. And underemployed Karen, (who, to her mother's horrified chagrin, dropped out of college) has visions of finally being able to move out of her efficiency because jobs in the rust belt are sure to come roaring back.

How can we possibly make it through dinner without incessant under-the-table knee pinching? Outright name calling? Hot heads on both sides abruptly leaving the table before the turkey has even been carved?

Well, we can boycott the dinner completely, order in pizza, curl up and binge watch "Masters of Sex."

We can ban all political banter. (Tee hee.)

We can drink to excess and overload on carbs, rendering ourselves useless to even follow a political discourse.

We can listen attentively to relatives' reasons for their deep depression over a Clinton defeat or their wild exuberance over a Trump sweep. (Fat Chance.)

We can vociferously debate the subject of lobbying to change the electoral vote system. (Long shot. Too many know-it-alls.)

We can tirelessly switch the topic back to sports and fashion. (In my family, that may actually work.)

We can inject some humor by telling wildly inappropriate jokes -- at least keeping the kids enthralled.

We can come armed with Civil War horror stories of brother turning against brother, vow not to repeat that sad saga, and urge restraint and tolerance.

We can practice art of gratitude.

We can bone up on our anger management and conflict resolution skills.

We can role play ahead of time how to diffuse Uncle Fred's inappropriate rhetoric.

And we can recall King Solomon's Parable:
Solomon, the powerful and wealthy king, chooses to test his most loyal and trusted minister, Benaiah Ben Yehoyada. The king asks Benaiah to find him a ring which has magic powers, even though King Solomon knows a ring like that does not exist. "If a happy man looks at it, he becomes sad, and if a sad man looks at it, he becomes happy," he tells Benaiah. And he expresses his desire to wear the ring for Sukkot, a holiday which is six months away.

After months of searching, Benaiah happens upon a jeweler, who, when asked if he's heard of such a ring, produces from his pocket a plain gold ring, to which he adds an engravement. Benaiah returns just in time on the eve of Sukkot to give the king the ring he has requested. When the king looks at the engraving, he reads four words: "gam zeh ya'avor", which translates to, "This too shall pass" or "This too will pass."

At that moment, King Solomon realizes that his wisdom, tremendous wealth, and power are fleeting things, for one day he will be nothing but dust."

I, too, am embracing the double meaning of "This too shall pass." How? By enjoying all the good moments of my life, while also realizing that difficult situations will sooner or later pass too. Even Thanksgiving dinner. Even a Trump presidency.

Iris is available to speak on a variety of topics, focusing on self-help, self-improvement and self-empowerment. For more information, contact her at irisruthpastor@gmail.com