Donald Trump is even sucking up the oxygen in a fake election.

ABC's jet-propelled Thursday night political soap Scandal, which has its own presidential election heating up, last week added one Hollis Doyle (Gregg Henry) to the mix. 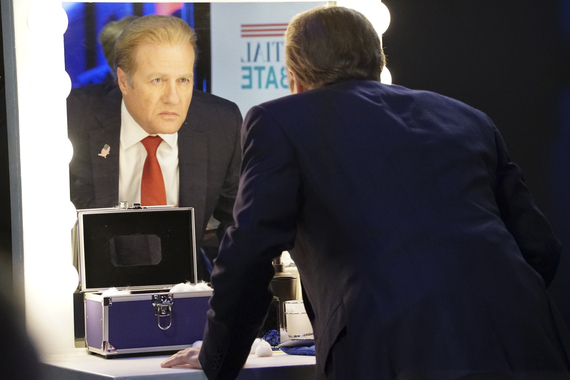 Now Doyle is a fictional character, so of course he would have only the most fleeting and coincidental resemblance to any real-life political aspirants.

Mr. Doyle is a flamboyant, ultra-wealthy lobbyist for a Texas energy company. He has a boisterous personal style that might charitably be called "rough charm."

Olivia Pope (Kerry Washington), the political insider and all-purpose fixer at the center of Scandal, calls him "the devil."

He has no reservations about greeting anyone who wears a skirt with a proposition, which or may not explain why he's been married five times.

He started this election, which will determine the successor to outgoing President Fitzgerald Grant (Tony Goldwyn), as ostensibly an outsider.

His apparent goal was to buy a candidate who would implement his wish list, which begins with shutting down the Environmental Protection Agency so it won't keep slapping all these annoying rules on oil exploration and production.

First he approached Mellie Grant (Bellamy Young), an underdog who needs money. She told him she wouldn't shut down the EPA and that her campaign would soon announce its focus on the need for early childhood education, like universal pre-K.

He said thanks and moved to Vice President Susan Ross (Artemis Pebdani), who might have been sympathetic if President Grant hadn't sat in on the meeting and thrown Doyle out.

That was kind of a harsh move, since Doyle is the guy who fixed the voting machines so Grant could steal the presidency in the first place. But Doyle's company got a $2 billion government contract and Fitz apparently felt that was enough payback.

In any case, Doyle decided to eliminate the middleman or middlewoman and run for President himself. So last week he announced his candidacy, at a big splashy event where he surrounded himself with children and announced he would be basing his campaign on the need for early childhood education. 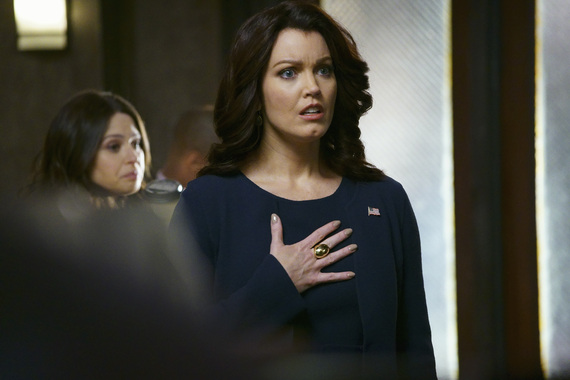 He didn't play up the EPA part of his plans, but he did say that he would slam the borders shut on all illegal immigrants, because America is for Americans.

He waved a lot of flags and made it clear he was not part of the political establishment.

Oh, that Scandal writers' room. It has some kind of imagination.

To round out the unfolding Scandal lineup, Doyle joins a campaign that already includes one woman, the aforementioned Mellie, who was married to the President, endured his fooling around, became a U.S. senator and now is running for President herself.

Like we said, what will those writers' room people think up next?

There's also a maverick Democrat, Francisco Vargas, who's running on a platform of free college education for everyone. He's played by Ricardo Chavira, who was less altruistic as Eva Longoria's husband Carlos on Desperate Housewives.

Hollis Doyle himself is something of a comeback kid within the world of Scandal. After playing a major role in season two, when the election fix was revealed, he was referenced just briefly in season three and absent in season four.

But now, with seven episodes left in season five, he appears to have become mighty useful all over again.

Let's guess he could get a fair amount of face time in coming weeks. 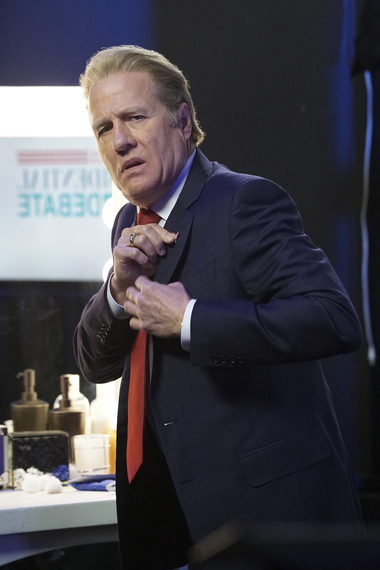 ABC and the Scandal team would love it if he provided even a whisper of a Trump-style ratings bump. The live audience for recent episodes of Scandal has been off about 40% from the season opener, to the lowest level in show history - though it still does well with younger viewers and in tape-delayed viewing.

Doyle's potential may be reflected in the fact that he's already been dismissed by President Grant as "a joke." That has an odd ring to it, almost as if we'd heard similar words used in reference to a real-life candidate a few months ago.

Nah, probably not. Probably just our imagination. You know, like you find in a TV series writers' room.