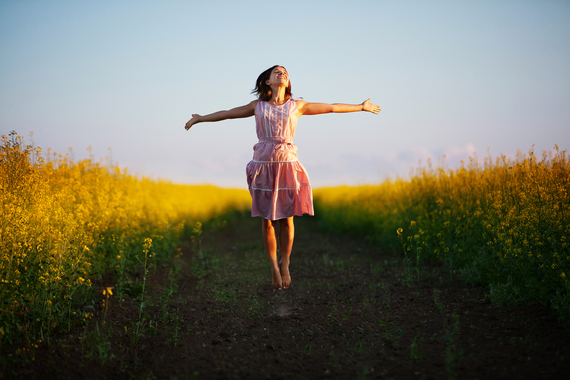 We all have different goals, values, beliefs, and experiences, but there is one universal thing that binds us all: We just want to be happy. But for the most part, happiness seems more like an existential dream than an attainable reality.

But for some reason, often no matter what we do, happiness is just out of reach. That feeling of utter elation seems more temporary than permanent. It's here one moment, then gone the next. Just when we seem to have attained happiness in one form or another, the feeling is lost into the abyss.

So how is it that some people seem to be happy all the time?

While this question has plagued individuals for an eternity, on a macro-level, the answers are far more clear. Supremely happy people exhibit a certain set of daily habits that sets them apart from the rest.

They have happy habits. In fact, there are 11 very important habits that happy people perform on a daily basis that help to reinforce their state of happiness.

Commit to at least 90 to 180 days of performing these happy habits to help make the behavior automatic, and happiness will no longer be out of reach; it will be well within your grasp.

Happy people smile, even when they don't have much to smile about. It's part of a state of mind, but more so, habitual behavior. The important part about smiling is that the change in physiology actually triggers a change in psychology.

Smiling fosters a happy state-of-mind, just as a happy state-of-mind fosters the desire to smile. In a study conducted by R Soussignan in 2002, where a pencil in the mouth was used to manipulate a forced or genuine (duchenne) smile while watching cartoons, this precise concept was confirmed.

It was determined that the people who exhibited duchenne smiles had a more pleasant experience while watching funny or humorous parts of the cartoon, while having a less negative experience during the bad parts. This "suggests that facial feedback has more powerful effects when facial configurations represent valid analogs of basic emotional expressions."

#2 -- They Build and Nurture Relationships

Happy people know that, in order to truly be happy, the focus can't just be on themselves; it must also be on others. That's what community is all about. When the focus shifts from yourself to others, you also move from a state of lack to a state of abundance.

What your mind is saying, subconsciously, is that you have enough of whatever you need in life, so you want to help others in any way you can. That, in turn, fosters a more happy state of existence and also forms the foundation for a life dedicated to contribution and giving.

Happy people are focused on the long term. They work to create value in whatever it is that they're doing in life. Instead of cutting corners, they go above and beyond the call of duty, so to speak. They always strive to provide more value in their work than what others have paid for it.

This is just as true for both employees and employers. Happy employees work hard and give their jobs all that they've got. They provide more value in their time than what's paid by their employers. For employers, they create value by delivering superior products and services that help people solve a problem or fill a need in the best possible way.

We've all heard the saying, "You are what you eat." No words could be truer. When we put things into our bodies that help make us feel sluggish and tired, there's absolutely no way we can approach the day with zeal and absolute energy.

On the contrary, happy people eat foods that are high in energy, raw, and nutritious. Rather than fill their stomachs with processed and fast foods, they opt for things made from natural and organic ingredients.

It's hard to be happy when you spend most of your day worrying about the past or living in fear of the future. Happy people live in the moment. They're present in the here and now. It doesn't mean that they've entirely forgotten about the past or don't care for the future, they just know that being present is far more important to their well-being.

Problems will always exist. In fact, problems are a sign of life. But, living in the moment and being present allows you to transcend those things. Taking up meditation or simply going for a walk in the park and allowing yourself to truly hear, see, and smell everything might allow you to get just a little bit closer to a more long-lasting sense of happiness.

While happy people tend to live in the moment, they also set goals for the future. The goals give them an intended direction of travel. They're steeped in their hopes and aspirations of whatever they're trying to achieve in life. It pushes them forward and keeps them focused on whatever it is that they're trying to accomplish.

But they don't just set long-term goals. They engage in daily goal setting, taking short steps forward towards the greater good in their minds. Then, at the end of each day, they can assess their rate of success.

Happy people are accountable. They own up to their actions. For that reason, they work to do the right thing. They're not looking to get the upper-hand in a transaction or to sneak a win in some unscrupulous way; they're willing to put in the work and let people know if they screwed up or not and what the reason was behind it.

By being accountable for their actions, they don't have to deal with the stress and worry of hiding out or masking their behavior. The amount of stressed placed on us by trying to deceive others and find scapegoats can become overwhelming, robbing us of any potential for happiness whatsoever.

Laughter is food for the soul. While happy people might be accountable for their actions, they also don't take themselves too seriously all the time. They know that good things eventually happen, even if they're going through a difficult time in life.

But laughter isn't only mental, it also has a significant impact on our physiology and mental health. It reduces stress by releasing happy hormones such as dopamine and serotonin into the mind and body, which also aid in systems such as digestion and reproduction.

Happy people seek adventure. They know that life's best experiences happen when they take themselves out of their comfort zone. This isn't just about traveling, but also about meeting new people, experiencing life through the eyes of different cultures, and exploring and discovering new things.

It isn't about spending money on fancy trips; this is about tasting the thrill of life in all its different forms. It includes things like trying different foods or taking a different route home from work than they're used to. They're open to doing new and adventurous things rather than living life in some strict box.

The mind gets whatever it is that it focuses on. It's very much like a camera's lens in that aspect. So, when we focus on problems, we tend to see more problems. They become bigger and brighter, and take more a forefront in our minds.

However, when think positive, and look past problems and negativity, not only do we feel better mentally speaking, but our minds are better able to process the here-and-now. In fact, positive thinking is not only the basis for being happier in life, but also for being more present.

While some people shy away from change, unable or unwilling to alter something they've become accustomed to in life, happy people embrace it for all its worth. Not only are they okay with certainty, but they're also okay with uncertainty as well. And, a potential for major change in their lives won't scare them off.

By embracing change, happy people are embracing life for all its worth. They know that all things change over time, and they're not afraid to just run with it, so to speak. Whether it's getting a new job, moving to a different city, or getting married and having kids, happy people are okay with change in all its forms.

healthy livinghabits of happy peoplehow to be happy
Go To Homepage