It finally happened last week. I finally had that moment of clarity and inspiration that wannabe writers dream about. That game-changing idea that no one has ever had before. I was so excited; this was it!

For parents, time feels like it passes incredibly slowly and quickly... at the same time.

I know, right? I can feel the reverberations from your collective minds being blown.

After a few days of reveling, however, I was reading my normal blogs and websites, mostly stuff that comes across my Twitter feed, and I found my brilliant, fresh idea written and talked about basically everywhere. For example, here, here and here. There's even a podcast -- The Longest, Shortest Time -- with the idea right in the title. And that's just the tip of the iceberg. It turns out my idea wasn't just a somewhat unoriginal one; it was maybe the most talked about parenting phenomenon in the history of parenting. It might not be an exaggeration to say that every parent who has ever written about parenting, or even talked about parenting for that matter, has touched on it.

I was devastated. I had had it all plotted out in my head. I was going to talk about how people always tell you how fast kids grow up and to enjoy every minute and how that wasn't completely true. How, when I have my kids at home for the day, I've never once looked at the clock and thought, "Wow, this day has really flown by!" How I feel like some days I spend, when you combine naps, bedtime and middle-of-the-night re-bedtime, approximately 26 hours trying to get my 10-month-old to sleep. How at the end of one particularly long day recently, driving home with the boys in the back seat, the 3-year-old talking non-stop, having a fake sneezing fit and imploring "spray water in my mouth" (don't ask, I have no idea), it all got to be just too much. And even though I couldn't put my finger on what it was that got to be too much, when Green Day's "Brain Stew" came on the radio, I turned it all the way up and got lost in it, letting the familiar sound wash over me and drown everything out just for a moment.

But sometimes, paradoxically, even though the individual days and nights can seem to go on forever, melding together until they feel like one continuous and never-ending expanse of time, the time measured in months and years seems to race by. I look into our baby's impossibly wide, blue eyes while I'm feeding him at 3 a.m. and I can't believe it's almost been a year since we brought him home for the first time. And although he and his older brother don't necessarily look that much alike, for some reason late at night when it's just the two of us, I look down at his face I see his brother. And I think about how fast the last two years has passed.

With all of that in mind, I had even begun to consider what pretentious name to give my new thesis -- the leaders in the clubhouse were "dichotomies of time" or "different scales of time." After I sorted the naming issue out, the game plan was to publish a blog post about it first and then use that as a springboard to my first book deal. Boom! And then, of course, there would've been the worldwide book tour. I was going to do it up big too, Lena Dunham style. I was thinking about calling in favors with all my celebrity friends. The more I think about it, the more disappointed I am that you all are going to miss out on all this. That's probably what I'm most broken up about -- disappointing my fans.

But alas, such is life.

It did get me thinking though, what else have I been missing out on? After all, I'm relatively new to the world of babies and toddlers. And though it sometimes seems like I've been a parent forever, I can still remember a time when, not only was I not a parent, I never thought I would be one in a million years (there's that dichotomy of time again... or different scales of time... I'm still torn). Let's just say I didn't used to be a kid person. Or any type of person person, for that matter. In fact, I owe Al Gore an eternal debt of gratitude for inventing the Internet and allowing me to meet an amazing partner and mother to my children without the torture that is interpersonal, face-to-face interaction.

So it stands to reason that I wouldn't know much about other people's experiences with parenting. It was never something that held much interest for me before I was a parent and once I was one, I didn't really have much time to explore. It's only now that I've poked my head out of the rabbit hole to look around that I've started to appreciate how unifying the parenting experience is for humanity.

But, I'm glad I did it this way. I'm glad I came at parenting somewhat blind to the realities of it. If I really knew about all the pitfalls and challenges in advance, maybe I wouldn't have signed on. And if I had been too scared and opted out, I would've missed out on the best thing I've ever done. 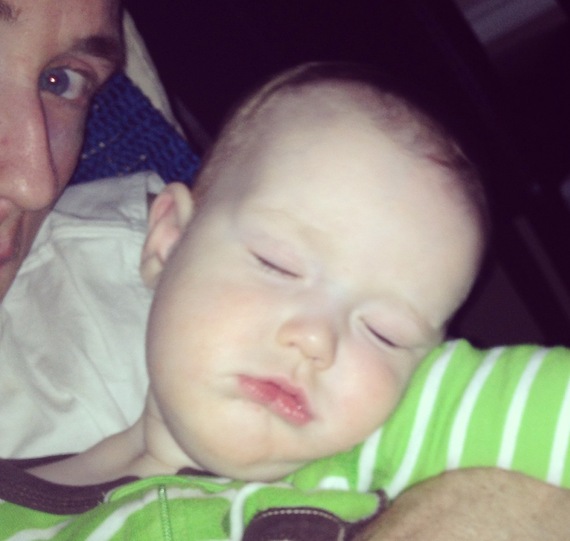