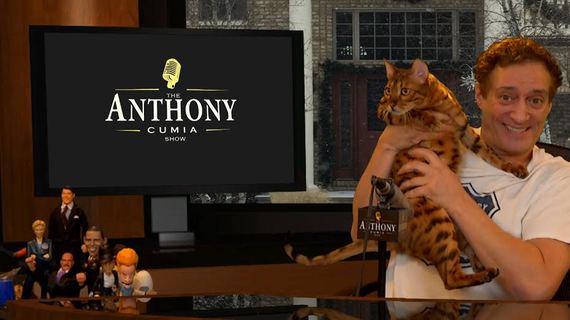 Who is Anthony Cumia?

If your answer was simply "fired co-host of The Opie and Anthony Show," you'd be living in the dark ages. After 10 highly profitable years on SiriusXM's most popular talk show after Howard Stern, Cumia was unceremoniously dumped this past July for tweets about an off-air incident that Sirius deemed racist.

Just a few weeks later, Cumia was already live streaming his own subscription-based webcasts from a state-of-the-art studio in his home on Long Island, known by fans as "The Compound." The positive response was immediate, and there was no turning back.

Cumia has succeeded in expanding in a market seemingly already glutted with webcasts. With everyone and their grandmother doing their own versions of Wayne's World in their basements, Cumia stands out as a seasoned pro, with a built-in and growing fan base that has eagerly followed him to the Internet and is more than willing to pay $6.96 per month for the pleasure.

He recently aired his 100th episode of The Anthony Cumia Show, he has more than 200,000 social media followers, and is already in talks to expand into his own Internet network channel. His staff can't keep up with fan demands of t-shirts, coffee mugs, shot glasses, and other Cumia merchandise. And he's only been live for less than eight months.

To celebrate his 100th show anniversary, I asked Anthony to reveal some of the unknown sides of the man whom the media usually describes as a ballsy, lewd, offensive, misogynist, contentious, drone-flying gun-nut. Does he have a warm and fuzzy side?

What's your definition of a good day?
When you wake up and turn on the news and there's one really big story or a lot of little, goofy things. A day where I got a good night's sleep is good. I feel like if I'm not up at 4am watching something then I'm somehow missing something.

Who has been your biggest inspiration in your career?
Of course, Howard Stern.

What lessons did you learn growing up that most helped you later in life?
I don't think I really learned much. I think it's all instinct. What's really important? Don't waste a lot of time on too many serious things, because those are going to come regardless of if you want them or not. It sounds a little hokey, but it really is my mantra.

How did you recognize that radio was your "calling?"
I always enjoyed it. It always seemed like the guys on the radio were always hanging out and having fun. TV seemed a lot more structured. Listening to Don Imus and then Howard Stern--who wouldn't want to do that?

What did you learn on the job that you could never have learned in school?
There's constantly people that are trying to curtail what you're doing. You can't learn how to deal with management in school. You have to know how to be diplomatic, political. It's not easy and the only way to learn it is to do it.

Who would be your dream guest; someone you haven't interviewed but would love to?
I would have loved to have sat down and have a little talk with Ronald Reagan. I bet he would have a lot to say.

The thing I like most about myself is...
...the ability to look at things and make jokes. To be able to make light of things that might be looked at as tragic.

The thing I dislike most about myself is...
...I really could be a tad more motivated.

If I wasn't a broadcaster, I'd be...
...a miserable man doing construction with a wife I hate.

The thing very few people know about me is...
...there ain't much. That's the thing about doing radio--you will open up yourself. But I think I'm a lot more sentimental than people think.

What do people get wrong about you?
I was doing a "master class" for broadcasting students, and people were very surprised that I wasn't cursing every two seconds, that I was able to construct a coherent sentence. I think people do get the wrong impression that I'm just off-the-rails 24 hours a day. I think people get the wrong impression because of the radio show, but that's just the life I've chosen.