By SHANE BARBI as told to REEDU TAHA

I have a supportive husband and a life-long companion in my twin sister, but it is a cat that I rescued from the streets that is the love of my life.

By now I think it is no secret that I love animals. Along with my sister, Sia, I have been rescuing them since I was a child. From climbing trees to breaking in my car for wildlife, to wading through floods left behind by hurricanes, to navigating my way through the fire-charred brush of Southern California -- it is safe to say that I would do just about anything to save an animal.

Most people remember my sister and me from Playboy, but those days are long over. In fact, today, Sia and I can be found protesting, not posing. Pet shops, anti-vivisection, the circus and zoos are just a few of the animal rights causes we have taken up over the years.

However, we can also be found walking and rehabilitating dogs at animal shelters in Los Angeles as well as participating in TNR (Trap, Neuter and Return) with Stray Cat Alliance.

That is how I met Shelly.

Shelly, a long-haired Persian mix, was part of a feral cat colony I was feeding in Beverly Hills. On an unusually wet Halloween night in 2006, I hung around outside after feeding mainly because Shelly is black. Unfortunately, ancient false myths have associated black cats with witches and demons and I wanted to make sure that there would be no sacrifices that Halloween, at least not on my watch.

Unlike most feral cats that are usually aloof and fearful, Shelly took refuge in my lap that night. She looked at me with pleading green eyes as if to convey a need to be rescued. Moments later, I realized that she did not have claws.

After I gathered that Shelly was once an indoor cat that was made to fend for herself in the wild, I took her home and had her vetted. 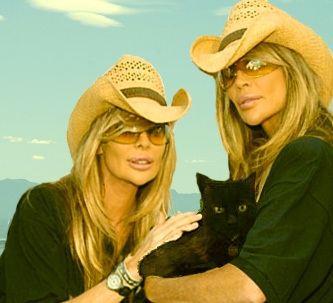 Shelly was fearful of everything in the beginning, but eventually came to trust me, my husband and Sia. She would delight us with unusual hugs as her little black clawless fingers clutched the cusps of our neck, akin to a spider monkey.

I soon came to learn that Shelly was not the unweaned kitten I assumed her to be. I learned from the vet that she was about nine years old and gravely ill.

The declawing of her nails was slowly causing her to become crippled. The second nails on each leg were ingrown and causing an infection which was, in turn, taking a toll on her kidneys.

The vet also said that she likely developed arthritis from walking on the insides of her paws. From that point on, it was enough to make me understand that declawing was more than just glorified nail clipping. And it was enough to add declawing to my long list of animal welfare causes.

With a little investigative work I learned that Shelly was set free by her previous owner because she was frightened of the dog that she shared a home with. Little did Shelly's owner know that it was daunting for a declawed cat to be living indoors with other animals because she could not defend herself. And little did Shelly's owner care that a life outside without claws was even more daunting, for she would not be able to defend herself there, either.

I even learned that Shelly's previous owner called her "Chanel." I found it troubling that the same person from Beverly Hills who would name her cat after her purse, had a vital part of the cat's body amputated likely just to protect her furniture. How vain.

Despite the implications Shelly posed on my health -- allergies and asthma -- I grew increasingly attached to my feline friend. How could I not? This cat was wronged by man and only man, and yet she still had so much love to give.

By July 2008 Shelly's body was giving out to renal failure. Her kidneys and liver were failing her as a result of the infection she suffered from the declawing. To keep her comfortable, we opted to put her on steroids and fluids.

The vet gave Shelly anywhere from a few days to a few weeks to live, but she surprised everyone by staying with us almost 10 weeks past her diagnosis. Despite the medication and the force-feedings, I am convinced that what really kept Shelly going was her deep desire for love.

Almost two years to the date on that damp Halloween night when Shelly first crawled into my lap, she left this world forever. My sister dug a hole in the ground while I held her close, and together, we laid her to rest.

I grieved for a long time after that. In fact, I think it is fair to say that I am still grieving for Shelly. Not so much because she is no longer with me, but because of the cruel life she was dealt -- from being declawed to being abandoned.

Little more than one year after the death of the declawed cat that forever carved out a spot in my heart, I find great irony in the fact that the declaw ban is sweeping through my home state of California. As of November 10th, six California cities have passed declaw bans.

In honor of Shelly, it is my hope that the ban against the big business and cruel practice of declawing continues to pass before 12/31/09. The California Veterinary Medical Association successfully passed a bill, SB762, which will make it impossible to pass local declaw bans after this date.

If you have a story similar to Shelly's or any other personal experience with declawing, please tell your story in a letter or email to your city representative.

To support the ban and to learn more about the big veterinary business of declawing please visit www.ThePawProject.com and www.StopDeclaw.com.