What's the correct way to eat sushi?: originally appeared on Quora: The best answer to any question. Ask a question, get a great answer. Learn from experts and access insider knowledge. You can follow Quora on Twitter, Facebook, and Google+. 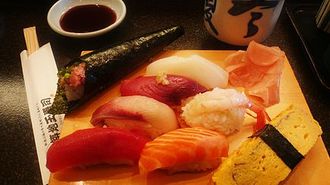 It appears that there are many people out there who are wondering what the "proper" way to eat sushi is. I suppose I was fortunate to learn sushi etiquette from a sushi chef's point of view.

I am wondering if this is just a phenomena happening in US only or somewhere else also?

Either way, I feel a sense of "fear" in those asking these types of questions as if someone (likely a sushi chef) will get mad and scream at them? Are there so many angry Japanese sushi chefs out there who demand "proper" behavior at the sushi bar because they think Americans behave so badly at the sushi bar? (I have to add that in Japan, as a matter of fact, many people are "afraid" of going to a high-end sushi bar fearing they must behave and eat sushi properly.) 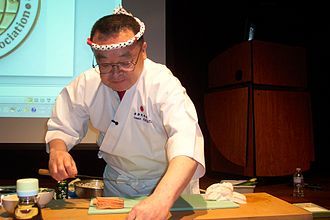 I do have to admit how shocking it was to see -- for the first time -- customers putting tons of wasabi in their soy sauce, saying "I love wasabi because it clears my sinus!", which is not exactly what wasabi is there for. I had to guess that there are so many people out there suffering from sinus problem and they choose to come to a sushi bar to correct it by eating wasabi, in a way, killing two birds with one stone?

What's more interesting is that it's not wasabi they are eating. Wasabi served at most sushi restaurants in US is powdered horseradish (yes, the one you put on roast beef) with yellow mustard and food coloring. Though I've never been to all the sushi restaurants in US, the reason I can say that most restaurants use alternative wasabi powder is because fresh wasabi or a "real" powdered wasabi is considerably lot more expensive.

Currently, a fresh wasabi in US (either from Japan or US grown in Oregon and California) cost anywhere from $50-$150/lbs., while powdered "real" wasabi costs 50% to 100% more compared to the horseradish powder wasabi. 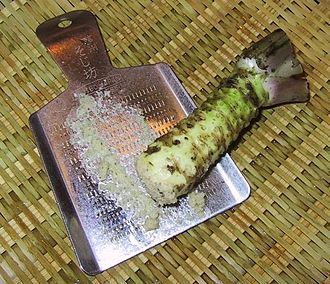 No need to add wasabi to nigiri because generally, nigiri would have wasabi in already.

I'd never put wasabi on any of inside (rice) out roll like California, Spicy Tuna and Rainbow Roll, though, I do put a little wasabi on top of fish on a Rainbow Roll, especially if I see tuna on it. 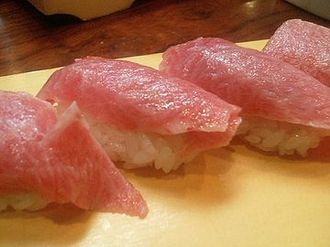 Wasabi goes really well with Tuna. (hint: use a generous portion of wasabi with Tuna sashimi.) 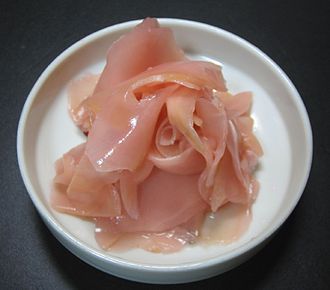 Eating Gari/Ginger between nigiri and rolls cleanses and refreshes one's palette, which is a good thing. It's never meant to be all you can eat bottomless condiments like ketchup or relish to put on your hot dog at a school cafeteria, so some sushi chefs may get upset if you keep asking for more gari, even if you tell them how much you love gari, especially if the gari is home made, though, that may be rare in US. If I were serving at the sushi bar, three times is the max and after that, I'd start to question if the customer lacks delicacy in taste? 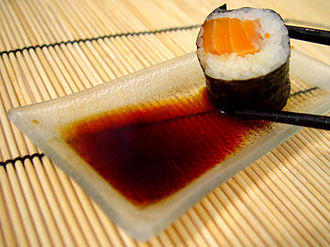 How much soy sauce to use is different between Japanese and Americans. Americans tend to use more soy sauce -- a lot more -- when eating sushi compared to Japanese. I suppose that may be because culturally, American food is heavily sauced, and many see soy sauce as "sauce" to put over a dish, while Japanese see it as something that "compliments" a dish. Soy sauce is never meant to be the main flavor of the dish. It always works as enhancer, bringing the natural flavor of the ingredient.

In the beginning when I started my sushi training, I used to get upset when customers asked for special requests like asking me to remove wasabi from their plate because they disliked it. I thought to myself, "Couldn't they just leave it there on the plate, not touching it?" I came to understand that it's just a cultural difference and nothing to take it personally.

During those training years (first three years or so), I got upset with many female customers requesting no mayo in their spicy tuna because I had to make no mayo spicy tuna from scratch, and it was a pain to make it during a busy time.

I didn't know what to make of "No Rice" SpicyTuna Roll -- spicy tuna wrapped only with Nori Seaweed. (I am not saying you should never order it, it just that it struck me as strange in the beginning.)

One of the most shocking sights was seeing rice balls from nigiri on a customer's plate. This was done mostly by female patrons. They order nigiri and eat only the fish, leaving many untouched rice balls on their plates. Later, I learned that eating too much rice makes them full quickly, and also some of them were on "diets" (Atkins low carb diet was popular during those days) avoiding as much carbohydrates as possible. Some of them told me that they wanted sashimi, and they only wanted two pieces of sashimi, so that was the reason they ordered nigiri and ate only the fish. (Sashimi comes mostly with five or three pieces while nigiri in two pieces.)

I told them that you can just ask for two-piece sashimi and I'd happily make it for them. They seem relieved to know that I offered such a flexibility.

Nowadays, after being sushi chef for fifteen years, I rarely question customers for their special requests. They can eat anyway they like it. I tell myself, "Hey, that's a very interesting way to eat sushi. I'd never thought of that!" I suppose you learn something new every day.

I think for a customer, a sushi chef can seem very unapproachable. He seems busy all the time moving his hands. He also appears authoritative. Some sushi chefs look very scary and angry. This is true for many Japanese as well.

Traditionally and generally speaking, going to a sushi restaurant, especially a high end establishment, and sitting at a sushi bar sounds very intimidating to many. For one, the sushi chef is looking down on you, and you will be looking up. Naturally, the chef has more authority than you, giving you an impression that you must not do anything to upset him.

Personally, I've never been to a sushi restaurant or worked with such a chef who gets upset easily (Needless to say, I am not one of them either). They were all genuinely nice, accommodating, comforting and open to customer's requests, willing to please us.

Most of the sushi chefs I know choose to be a sushi chef because they love the art. All of them continue to do their job because they want to see our happy faces and [in Japan] say "Gochiso Sama" (Thank you -- the food was delicious). When a chef hears that magic word, all the trouble goes away, making all the bad things good and gives him energy and motivation to keep doing more of what he is doing just a bit better. In the end, that is all he wants -- seeing others happy from the food he offers.

Nothing else matters in the end. It doesn't matter whether the customer knew how to eat sushi or ordered too much gari, starting eating from Toro, or asked to cut nigiri in two pieces because it would be too big for her mouth. As long as you genuinely enjoy the meal, it's OK to eat sushi any order, any way you like it, because that was how it was when chefs started serving sushi at sushi stands in Tokyo over 150 years ago.

Ordering sushi at a sushi bar is just like ordering a sandwich at Subway, I think. You go in and pick the bread, meat, vegetables and sauces and they will make it just the way you want it. You look at the fish; you order it the way you like it, and you sauce it the way you like it too. The only difference between a sushi bar and Subway is that at a sushi bar there is an expert, a professional with many years of experience, who knows a lot more about the fish and the best way to eat it better that you do, and he is at your service. It's up to you to utilize it for your best dining experience because the service fee is included in the price of sushi.

Again, It's your sushi, and you can order it and eat it any way you like it -- just as long as you don't order too much gari!