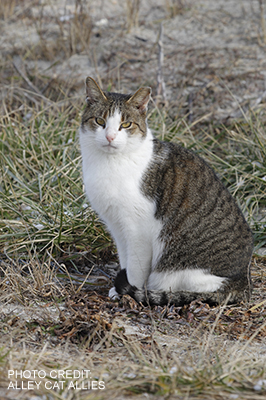 It's the Australian government's plan to kill 2 million cats. Why? Because, according to them, they're "pests." The fact is outdoor cats -- pet, feral or community cats -- are still cats.

Australia has a disturbing history of vilifying cats. They've been called everything from a "terrible scourge" to a "tsunami of death and violence." Even before Australia's current plan, land managers across the country were encouraged to kill as many cats as they could find.

There's even an app, "FeralScan Pest Mapping" available at the App Store and Google Play, that lets you map sightings of cats by entering their location with latitudes and longitudes; and if you don't have the stomach for killing cats, you can let others kill them for you. The killers can record their morbid killing in a selfie and post it to the app's photo gallery. Any Aussie can now "Rambo" through the countryside and, during the next five years, wipe out as many of the 2 million cats as they can find.

FeralScan is part of an ill-conceived plan supported by the Australian government to protect Australia's wildlife. Greg Hunt, Australia's Minister for the Environment, officially declared open season on cats, advocating shooting, poisoning, and lethally trapping them. Extremely dangerous and cruel poisons, such as Compound 1080 and the yet-to-be-approved Curiosity®, sanctioned to kill cats, are also lethal to humans, wildlife, and pets.

With such massive environmental destruction, will killing 2 million cats protect Australia's wildlife? No.

Killing cats won't protect Australia's wildlife. It will only open up habitat and resources for the remaining cats who will reproduce with larger litters of kittens and improved chances for survival. When an area's original cats are killed, cats from other areas move in, taking advantage of the same resources that attracted the first group. This is known as the "vacuum effect."

Communities in the United States have tried killing cats for decades to "control" them and have failed miserably. Catching and killing cats is now being abandoned in the U.S., and the humane and sensible Trap-Neuter-Return (TNR) method is mainstream.

With TNR, cats are humanely trapped, usually by volunteers, and brought to a veterinarian to be neutered, vaccinated and eartipped (the universal sign of a neutered cat), and then returned to their outdoor homes. Reproduction and roaming stop. Cats stay healthy and don't spread disease. Population numbers decrease over time.

TNR has been successfully used in the U.K., Denmark, South Africa, Israel, Panama, Mexico, and Canada. If it's good enough for them, it's good enough for Australia. TNR is supported by an impressive body of peer-reviewed research published in respected scientific journals. The research shows that TNR is the only effective and humane way of stabilizing and reducing cat populations over time.

Australia's strategy claims to be based on "best practices" and "evidence-based decision making." Yet, there's a shocking lack of credible science supporting the view that cats pose a serious threat to Australia's ecosystems.

Professor Christopher Dickman from the University of Sydney, whose Threatened Species Recovery Hub receives funding from the Department of the Environment, stated that "Convincing evidence that feral cats exert a significant effect on native wildlife...is scarce.... There is no evidence of feral cats causing extinctions in mainland Australia or Tasmania."

Australia's cat strategy appears to be a shameful diversionary ploy to redirect attention away from industry-caused wildlife extinction. By focusing on cats, the government hopes its citizens will ignore vastly more significant wildlife threats. This includes agriculture's intensive land modification, the country's massive, multi-industry habitat destruction and fragmentation, and the use of lethal chemicals, including pesticides, herbicides, and poisons. These poisons don't discriminate. They threaten the lives of cats and dogs and wildlife.

This is not about cats vs. birds or cats vs. wildlife. We don't have to sacrifice one species for the other, but we do have to examine our own actions. Alley Cat Allies values all animals, and opposes this cruel and unnecessary cat slaughter in Australia -- and anywhere else -- as ineffective and unworkable.