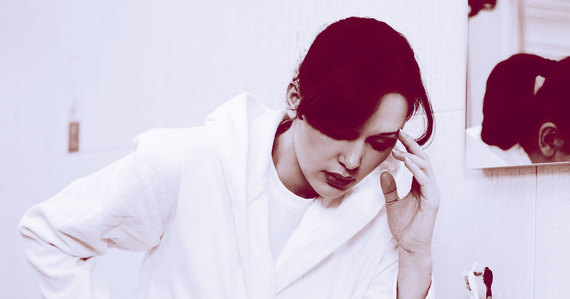 Right on time. That deep, familiar burn was radiating in Denise’s* chest, tunneling toward her esophagus. She sat up, unsurprised. No matter how Lilliputian her portions or how gradually she ate them, the acid always emerged. The only thing that varied was the time of night. This evening’s arrival was 2 a.m. She propped herself up on her pillows, careful not to wake Kyle.

After a few minutes, she rose from bed and, as she’d done for the past three months, felt her way through the darkness to the bedroom door. Closing it behind her, she stepped into the hallway and flipped the switch. She paused and let her eyes adjust to the harshness of the light. Once acclimated, she went to the bathroom, chewed a handful of Tums, splashed some water on her face. Denise smiled at her reflection, pushing her belly out and softly rubbing its roundness. Just three more months, she thought, before making her way to the couch and turning on the TV to distract herself. Just three more months.

Those three months passed and Denise gave birth to a seven-and-a-half pound baby girl. Healthy, cooing, beautiful. At the same time, a profound depression settled in. She was tired, irritable, anxious and cried often. Most troubling to Kyle, however, was his wife's discernable displeasure at the sight of her child. She made occasional comments about the incessant crying, bemoaned the fact that her life was over. This was not the Denise he knew. She was positive, ebullient and, most of all, thrilled at the prospect of becoming a mother.

Denise’s post-partum depression, thankfully, was not severe. She attended counseling, changed her diet. Within a month, she emerged from the fog. Her treatment had been relatively simple and completely medication-free.

She was, however, prescribed one strange item: orange tinted sunglasses.

Some form of postpartum depression (PPD) affects nearly one in four mothers — roughly 950,000 women. Likely brought on by the hurricane of hormones that moves its way through a woman’s body during pregnancy, PPD could also be trigged by major life trauma or some blip in genetic makeup — any number of factors, really. One that researchers are finding more and more common: blue light.

Pregnant women wake often in the night, whether to use the bathroom or deal with the effects of heartburn. They rise, flip on fixtures and lamps. In doing so, they're increasing their exposure to artificial light, which in turn affects their circadian rhythms.

To learn more, Van Winkle's asked Dr. Richard Hansler, a physicist and former professor at John Carroll University whose authored five books on the subject of melatonin and its affect on our circadian rhythms.

“If a woman exposes her eyes to artificial light during the night," he said, "it will do two things: stop the flow of melatonin and, as is often the case, reset her circadian rhythm."

Hansler now works with Ohio-based LowBlueLight, a company dedicated light-awareness. Low-wave blue light, he explains, is a biological trigger that tells our bodies its time to rise. Constant exposure to it at night, confuses our natural systems so much that our clocks unwind. “This can excacerbate the depression associated during and after pregnancy and have some serious consequences,” Hansler said.

Blue light is having its moment in the cultural zeitgeist, with countless products and apps hitting the market. But we've long known about blue light's impact on our body's production of melatonin, the natural hormone that triggers sleep in humans. The first big study came in 2001 when a team of researchers from Flinders University in South Adelaide, Australia, released their findings on the melatonin-suppressing effects of blue light. A torrent of similar conclusions followed.

It's only now, with so many blue-light-emitting devices in our bedrooms, that it's becoming a mainstream topic of conversation — and concern. According to the Harvard Medical School, "light throws the body’s biological clock — the circadian rhythm — out of whack. Sleep suffers." Even worse, "research shows that it may contribute to the causation of cancer, diabetes, heart disease, and obesity."

Not all colors are created equal. As Harvard noted, "Blue wavelengths — which are beneficial during daylight hours because they boost attention, reaction times, and mood — seem to be the most disruptive at night."

Multiple studies have shown that orange-tinted sunglasses block the blue light produced from LEDs and electronic devices. A 2009 study performed by researchers at the University of Toledo showed that adults who wore blue-light blocking glasses three hours before bedtime enjoyed better sleep quality. They also reported better overall moods among the blue-light-blockers. (The control group had their ultraviolet light blocked.)

Returning to Denise's story, women with postpartum depression have been shown to recover more quickly when given orange-tinted glasses. That is to say, glasses that block blue light.

“They’re incredibly effective, as they block all forms of the rays,” said Dr. Hansler. “And they're an incredibly potent solution for anyone who wants to stave off some forms of depression — especially pregnant women.”

Is blue light the main factor in the postpartum depression? It's too early to say, but probably not. In all its forms, depression is a complicated condition to diagnose and treat; its causes are legion and its harmful effects long-lasting. But circadian rhythms certainly play a role in at least some cases; it follows, then, that we should consider factors that can throw it of course.

For something as serious as PPD, every step forward is an important one.

* Names have been changed.