"At some point, I don't know when, she should have a show," said Phil Griffin, hours before he was promoted on Wednesday to president of MSNBC. "She's on the short list. It's a very short list. She's at the top."

At the moment every slot at night on MSNBC is taken, with David Gregory at 6 handing off to Chris Matthews at 7, and with Dan Abrams at 9 following Mr. Olbermann at 8. But some shuffling could be in the offing; Mr. Matthews's contract, for example, is up next year.

Every slot at night on MSNBC may be taken, but every slot is not. There's one slot no one is talking about, and it's been vacant for a month: The Tim Russert Show, on Saturdays at noon.

It's nowhere near Meet The Press in significance or ratings, but it was appointment viewing for many during the one slow newsday of the media week, an oasis in a lineup of prison docs and true crime stories. ("Mind of Manson" must do well because I've seen that one quite a bit.) That timeslot (plus that of its weekend repeats) has not yet been spoken for.

Yes, we know, the doc blocks do well (congratulations, Contessa!). But apart from the morning news blocks, "The Place For Politics" is a politics-free zone over the weekend (MTP rerun excepted). And there is an audience that is still out there waiting — waiting to see what becomes of that vacancy, waiting for the return of a chatty weekend political talk show, and yes, waiting to see a show helmed by Maddow.

True, Matthews' contract is up next year (though I personally hope he stays, since I like his show, and I like him), and I suppose Maddow could fill in one of the Harball slots, but why introduce a new show right now — especially since the most recently-added show, Race For The White House, is the lowest-ranked of MSNBC's primetime lineup? Ditto the Countdown repeat at 10 (which Steinberg deftly avoids mentioning in his write up) — they free up that slot for Maddow, maybe giving it a built-in advantage by having Olbermann throw to Maddow a la Stewart and Colbert, and moving Verdict to 10 p.m. (leaving Dan Abrams to match legal wits with Greta Van Susteren on one side and dimples with Anderson Cooper on the other).

But again, why? Countdown is the highest-rated show on the network, with the most rabid fan base (check out Daily Kos if you doubt), and reruns don't require an entire new production staff. Verdict is doing better in its timeslot than anything MSNBC has ever run there, and was the network's second-highest rated show last month. Much has been made recently of MSNBC's finally-winning formula (cf. Phil Griffin: "It's our time") — so why shake things up again now?

No, the weekend is the perfect spot for Maddow, a great place to consolidate the audience that has learned to love her during primary nights and her guest spots across the rest of the dial. MSNBC's audience has had the chance to get to know Maddow so far; why wouldn't they follow her to the weekend? Especially if NBC/MSNBC network talent chips in to make it work (as she has done — especially on those hat-trick nights when she'd start on Race and go straight through Verdict). That goes double for Olbermann, who could bring a little cross-promotional synergy as a guest panelist (though that would take things that much further away from Russert's show, obviously.)

The point is, if they really do want to give Maddow a show, this is the opening — and the timing will never be better, during this careening campaign season with its swollen audience and swarms of bloggers hyper-attuned to every move the cablers make. If they want to replace Russert's show, if they want to up the politics quotient on the weekend — this is a good first step. Mind of Maddow? A definite improvement.

p.s. Soup Cans notes the oddness of the NYT photos by Bess Greenberg, which don't show Maddow directly, instead showing her from the back and/or covered up by an Olbermann mask (scary!) and/or at a bit of distance in the makeup room and the studio. When the photos — four of them — are taken as a whole, it becomes apparent that Greenberg is playing with images as projected on different surfaces from different angles — I draw your attention to the artistry of the wide-shot photo, showing Maddow in the MSNBC makeup room mirror, and in the mirror of an open compact on the counter, and to the studio long-shot of her at the Countown desk juxtaposed with an image of her face on the monitor in the foreground. Both are reprinted below. It's the little things.

p.p.p.s. Is that Jonathan Alter awaiting his turn to be primped and powdered? I think so! 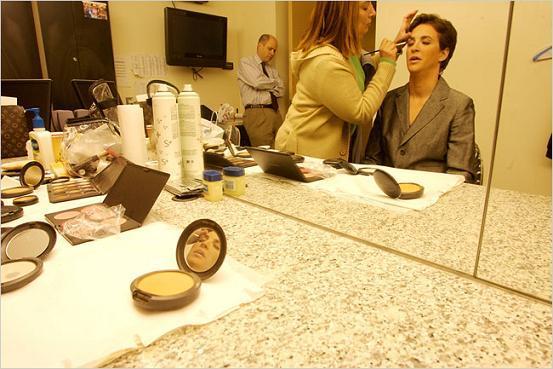 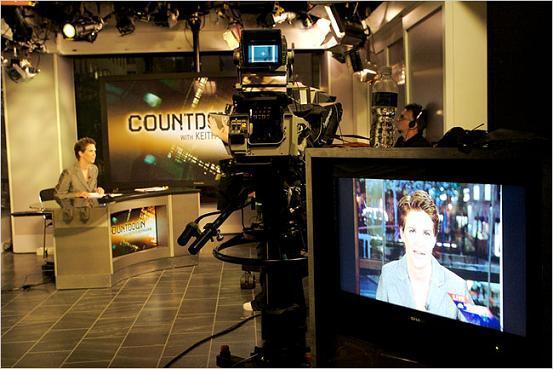