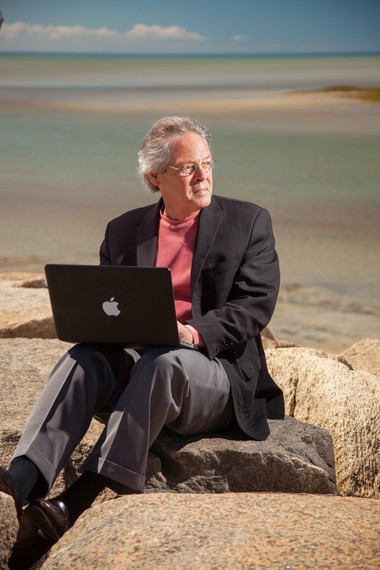 Shipwrecks ever stir the soul. The intense isolation of being lost at sea is deeply penetrating. As I stare up over morning coffee at a watercolor of the British schooner Walter Millerthat was stranded and wrecked in a dense fog on Nauset bar off outer Cape Cod in the late 1800s, I can't help but think of the hopelessness of the moment.

Cape Cod is a graveyard for shipwrecks. Since the early 1600s, more than 3,000 ships have run aground in the treacherous shoals of the Cape's Great Outer Beach, from Provincetown to Chatham. Yet, turning despair into hope 121 years ago, the villagers queued up in a fierce nor'easter to shoot a rope line from the beach to the Walter Miller to attach a breeches buoy -- a crude rope rescue device with an ancient leather harness -- to rescue the crew, pulling them to shore, heave-ho by heave-ho.

I am having breakfast today with one of the modern day Outer Cape villagers, Dr. Barry Conant, my personal physician and a close friend for almost a quarter century. In the roiling waters of Baby Boomers bracing for end times, Barry and I are shipwrecked, feeling the isolation of grounding on the shoals of inveterate disease. There is no breeches buoy for the two of us, no heave-ho from the shore; the rescue rope goes out only so far.

And so we talk casually over scrambled eggs about shipwrecks, the shifting sands of life, and forgotten promises of a generation. However, the elephant in the room is the collective poignancy of the moment. "My goal, as I exit, is to be in harmony with the divine," says Barry.

I nod in quiet agreement.

Our regular Saturday breakfasts are akin to an encounter in Tuesdays with Morrie, with both of us in the role of Morrie. Two guys trying to beat the curve, dead men still walking. Barry, at 60, has pancreatic cancer with a 12-percent chance of survival within the next three years; he also has a defibrillator in his chest, an inherited heart condition. Five years ago, at 59, I was diagnosed with early-onset Alzheimer's, a disease that stole my maternal grandfather, then my mother. I also have prostate cancer, but have decided to forego treatment. It is my exit strategy; I don't want my family and friends to carry the burden of caring for me in the end stage of this horrific monster that eats away at my brain, bit by bit, day by day.

And so, the two of us press on.

Today is a roundtable of future promise, not failures of the past, for which there are many. We are card-carrying members of the once invincible Baby Boomer generation -- sons and daughters of the Greatest Generation whose grandparents endured World War I, and whose parents survived the Great Depression and World War II, perhaps the last world conflagration until Armageddon. A record 75 million of us born between 1946 and 1964 who played by the rules, then broke the rules, then made new rules. Our profile is universal. Like the "No Where Man" of Lennon and McCarthy: "...Isn't he a bit like you and me."

The doctor and the patient, we are cut from different cloths, yet we recognize the parallels between us. Ever look between two facing mirrors; one can see a seemingly endless line of images fading into the distance. In principle, it's called "looking into infinity." Each mirror reflects the image into the other mirror, bouncing these reflections back and forth into infinity--gateways, some speculate, to parallel universes.

Barry and I today stand at the gateway. Together, we embrace the moment in a reflection of the past, with anticipation of what is to come. "Every day now, I feel that I'm put in a different classroom to learn a particular thing," Barry says, as we share a third pot of coffee. "That's what keeps me going -- probing the heart beyond rote rules and regulations." The son of a strict Baptist minister from Long Island, New York, Barry calls himself a "recovering, fundamentalist Baptist, who has become Unitarian in his understanding of the divine." The father of two, he is an avid fisherman on Cape Cod Bay where at low tide the water flows out for almost a mile with the pull of the moon, exposing soft ripples of mud flats rich, just below the surface, flush with steamers, quahogs and razor clams. Years ago, he sought to catch as many fish as possible. The bigger the trophy the better.

He is different now. The cancer has changed him, softened the drive of this Hemingway prototype of The Old Man and the Sea. He now throws as many fish back as he lugs to his backyard grill overlooking the bay. Live and let live. Barry has the eye of an eagle and the soul of a pastor. He watches intently for the laughing gulls, black gulls, and terns that dive for baitfish, sand eels, and baby herring, known in these parts as bay anchovies. He knows that the bluefish and stripers will chase the bait. Barry says you can fish on the flats for two hours -- an hour before and after low tide -- without having to worry. The tide, as it is with aging, creeps in deceptively.

Looking out at the horizon, Barry says one cannot discern the tidal flow, and if caught unaware, the swim back is a long haul in waters where Great Whites have been spotted. "Not a place," counsels the doctor, "for a guy like you with Alzheimer's."

"But if you're careful and going out in the early evening, the sunsets are indescribably beautiful," he says. "The sun dips into a watery horizon, and as the candle is extinguished, the light fades up."

So it is with life, he notes.

Barry and me, the doctor and the patient, we learn from one another, as the roles keep reversing in this conversation.

"I accept that my life today is not a long-term plan," says Barry. "I think we are all eternal souls that, for the moment, are given mortal and physical bodies to learn and to understand the universe, to be more at peace with what we have been given this day.

"We are part of a greater, eternal whole, but the vast majority does not recognize this, allowing themselves to be distracted by self-imposed, day-to-day stresses, and exploiting unhealthy behaviors to muffle the voice of the god inside them -- to stifle the search for a place beyond memory." I can relate for I am gripped with memory, the loss of it, as I strive to speak and write from the heart, not the head, as I once did. I chase now a freeing spirit, much like a gifted athlete "in the zone," or a master artist with a brush and a kaleidoscope of colors at the reach. Perseverance separates the artist from the dabbler. As you lose self, one finds self -- the dichotomy of two opposites happening at once. The bright guys might call this quantum physics. I call it the journey from the embryo to the soul.

Barry is searching himself, a path perhaps more discernible for those with cancer, Alzheimer's, AIDS, ALS, Parkinson's, Huntington's disease, or any number of vile diseases that attack the soul as well as the body. "I hope to be at peace if the cancer takes me out, remembering that my soul will remain eternal in a different plane of existence, still learning and resonating even more with the divine," he observes.

Barry says he tries to ignore fear, rising above it.

I tell him that I am motivated by fear. But today we find each other along this journey, seeking the essence of truth, trying to separate the real from the imagined. A favorite Old Testament scripture, I note, is Isaiah 6:8:"Then I heard the voice of the Lord saying, "Whom shall I send? And who will go for us?" And I said, "Here am I. Send me!"

Ultimately, whatever direction we are sent, our timelines are in place, the tumblers are clicking. We are grateful for the tick.

And so, I ask Barry what he would do if he knew today was to be his last; could he, as the rock band Nickleback resounds in classic lyrics: "...Say goodbye to yesterday; would you live each moment like your last?"

Barry says he hopes all his regrets would be gone, all his apposite goodbyes delivered to family and friends. "I'd like to be able to say a loving, yet temporary goodbye to my wife and kids, then wade out into the flats of Cape Cod Bay, remembering who and what I am," he notes.

I tell him that I'd walk the beach, a place that has always given me solace. Maybe I'll see him casting a line.

Barry and I -- the doctor and the patient -- are standing naked and aground today, working to follow our hearts, and trying to regenerate. Shipwrecks stir the soul.

Greg O'Brien's latest book, On Pluto: Inside the Mind of Alzheimer's, was recently published. He is also the subject of the short film, "A Place Called Pluto," directed by award-winning filmmaker Steve James, online at livingwithalz.org. In 2009, he was diagnosed with Early Onset Alzheimer's. His maternal grandfather and his mother died of the disease. O'Brien carries a marker gene for Alzheimer's. For more information go to:OnPluto.org

Greg O’Brien is an award-winning investigative reporter, has been diagnosed with early-onset Alzheimer's and one of those faceless numbers.