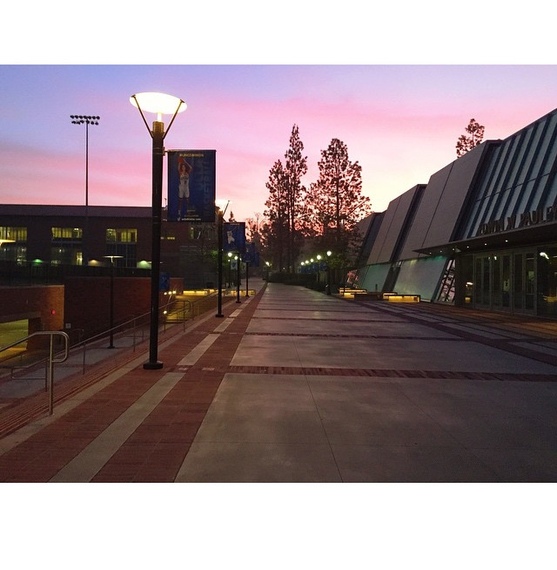 John Wooden is nothing short of a god worthy of worship on my college campus. Not only did he deliver ten national championships to UCLA over the course of twelve years, he also delivered a lifetime of words to lives by. Among his most famous sayings was a simple secret to success: "No whining, no complaining, no excuses." But just last week as I passed his statue in front of our notorious basketball arena, I noticed something written in chalk below his figure: "It's not whining. It's fighting for something we should have had long ago -- equality. #blacklivesmatter"

It should come as no surprise that racism is alive and well on my college campus, much like racism is alive and well in this country. But what makes this statement especially saddening is its directive at a college campus: a microcosm which in theory should be a beacon of progress and hope for future generations. Where difference is a point of celebration, and diversity leads to greater acceptance. This is not such a place. America is not yet such a place.

I see acts of judgement and exclusion every day, with little change from the time I started my tenure at UCLA four years ago. Take for instance our campus-wide elections for the university students association. Students meet in secret before campaigns are officially allowed to begin. Each party systematically vets potential candidates to gauge their electability in order to concoct a perfect slate. In the subsequent weeks, the candidates duke it out with each other by all means possible. And what always follows are more messages of hate, slander, racism, anti-Semitism and gay bashing than I would have ever expected. All for a petty political contest. Candidates are systematically attacked for that which simply should not matter. That which absolutely does not matter. I guess my point is that in a place where young people should be obeyed by thoughtful musings of a hopeful future, somehow reversions to prejudice, discrimination and hate are commonplace. And at a time when these individuals are at a critical juncture in their lives, so many are choosing the path that has been too often taken by this country's forefathers.

Yet, this should come as no surprise. How could it when turning to the rest of the United States, where stories of prejudice are much worse and often much more violent. Reports on the television and in the newspaper are not magnifications of rare incidents. They are reflecting that which has been true since the beginning of our founding: the blatant exclusion and systematic degradation of minorities in America. There is nothing novel about racism in our history. Intolerance maintains a longevity and power unlike any other founding principle of America. It endures and it rules.

This is disheartening. No; this is tragedy. Martin Luther King Jr. once said, "The hottest place in hell is reserved for those who remain neutral in times of great moral conflict." If ever I have seen a moral conflict so glaringly obvious, it is this. It is today when people are dying at the hands of those who are supposed to protect us. It is today when twenty-year-olds would rather target another person for his or her race than discuss issues that might help improve their educational system.

We are rioting in the streets, protesting for the same injustices that have plagued our nation for far too long. We are watching on the news, images of our brothers and sisters, friends and countrymen who do not stand alone in their need to be heard, their need to be answered. I say "we" because those people, those people are you and they are me. Baltimore is just as much my home as is the golden state. Those who feel slighted, betrayed, persecuted, villainized, targeted, murdered, forgotten by this society, have also been forgotten by my society.

I feel shame and sadness for the things I see. On the brink of entering the world and coming into my own, I feel a strong sense of duty to make right the wrongs that have persisted for far too long. I hope this is a feeling shared by my peers. For we are the ones who will inherit the status quo, and we have the choice and the obligation to change it. We have the opportunity to start the conversation, to move the debate, and act decisively.

So what are we to do? What is the answer? The best response, the only response, is one that no longer lingers in the cowardly and ignorant shadows of neutrality. Taking a stance is the first move in any direction forward. No matter how big or how small, there needs to be a moment of impact where refusal of the present meets a vision for the future.

We must consciously choose to see our country as it is: a nation where color, income, class, and education are indicators of exclusionary, prejudicial acts. There is an undercurrent of racism and hate and as it boils to the surface, we must acknowledge this truth in order to fix it. Listen to the messages that speak out. They are not whines; they are cries, calls, demands for a greater society. One that seeks to represent and benefit the sum of all, not a portion of some.

We need to elect representatives who know this truth, and who want to be agents of change. We must reject status quo politics that allow institutional racism, that keep minorities unemployed and underprivileged, and that allow innocent Americans to die. Our leaders should be seeking policies of greater inclusion and representation. And as citizens, we must demand more for ourselves and for each other.