The Islamic Society of Boston Cultural Center -the official name of the largest mosque and Muslim gathering place in New England--was twenty years in the making. Since its construction no one connected to the mosque has been arrested for terrorism, there have been no disruptions to the local community--as some--predicted, and the horror stories that preceded its development seem shrill and histrionic in retrospect. But Muhammad Ali Salaam said this should come as a surprise to no one because none of the stories ever had any basis in truth. 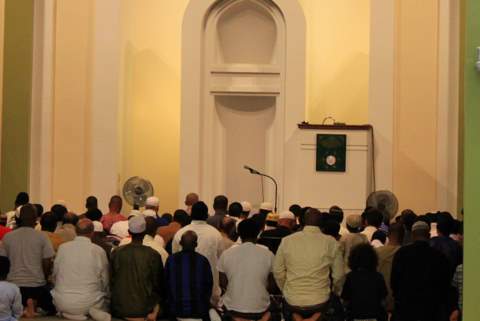 During an interview for an in-depth radio report on the mosque, Ali Salaam, who works for the city's Redevelopment Authority, proudly took me on a tour of the building that sits on two acres of what had been Boston-owned property.

Last June the Mosque formally opened, but the emotional path to getting there was tortuous, according to Ali Salaam, who said they had to fight off lawsuits over construction before the final brick was put into place in the minaret that towers over Boston's principal black neighborhood. The 15 million dollar project--raised through donations and noninterest loans--was backed by Boston Mayor Thomas Menino and other key Massachusetts officials. But its detractors, led by a conservative Israel advocacy group, the David Project, accused the Mosque's leaders of links to terrorism. That in turn led to the filing of a defamation lawsuit by Islamic Society leaders. All litigation was later dropped. But even on the grand opening day, worshippers were met by demonstrators, who said the mosque was led by extremists and funded by groups tied to radicals.

That was more than a year ago and much has changed since then. In seeking an interview with the David Project, I was told that the former executive director who led the charge against the mosque has been replaced, and I received an email from the organization's new leader stating: "The David Project is no longer involved in the Mosque controversy and thus cannot comment."

Much has also changed at the Mosque itself: Recently I observed hundreds upon hundreds of worshipers filing into the cavernous great hall of the Boston Mosque in flowing blue, white and orange streaked robes. 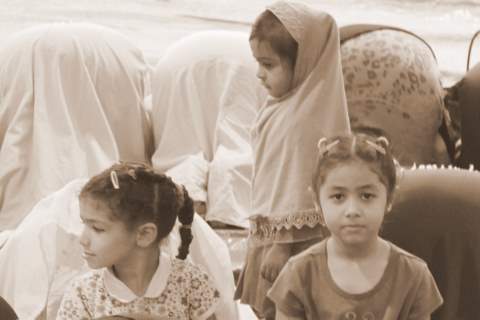 Women and Men removed their shoes and placed them neatly on a stand before walking into the marbled prayer room. "Were it not for this place, where would you see this much diversity?" asked Ali Salaam: All around me were African-Americans, Ghanaians, Gambians, Pakistanis, Bangladeshis, Somalis, Bosnians, Lebanese and a white Texan named David Curran.

Curren says these days he tells strangers about his religious background ONLY after he gets to know them; a habit developed nine years ago:

I had worked a job for four years. And nine -eleven happened. I had become a Muslim four months before nine eleven, so I wasn't prepared for all that. I had just come to Islam because of the spiritual aspects. And all at once, I had to be an apologist for 1.5 billion people. This job I worked four years, I'd always gotten good raises and stellar reviews and everything and then I let people know that I'd become a Muslim. That fifth year I didn't get a raise. My reviews were so poor that they actually let me go. That was my first experience with discrimination.

So Curran came north, where he said he expected fellow Americans to be more enlightened and arrived as the Boston Mosque was in the midst of controversy: Anwar Kazmi, originally from Pakistan, sits on the board of the Islamic Society and says what is happening today in New York echoes what happened in Boston. And that fear is still reflected in conversations among Muslims at the Boston center. Sarah Quargeary, the office manager, cites the recent attack on a Muslim cab driver in New York:

I was actually quite taken back by the man who had his throat slit. And part of this is because if you look back in history, whenever they want to do something bad, there's this ramp up in the press about the people whom they want to do something bad to. If you look at Rwanda, for months before the actual massacre happened, everyday on the news it was about THOSE people, those Tutsis, those monsters, and finally, those cockroaches. And they're doing the same thing now.

Muhammad Ali Salaam says the Boston Mosque and the proposed center in New York have points of commonality that bind them in this emotional atmosphere:

We get hate mail and the like. But you have to remember that Islam is a relatively new religion in America, and we submit that any religion whether it was Christianity, Judaism, whatever, they had to go through a moment of persecution before they were accepted. If you go to the state House, you see a statue of Mary Dwyer. She was martyred for her beliefs:

And almost on cue, a recent interfaith rally at the Massachusetts state house took place in the shadow of a statue honoring the murdered [16th century] Quaker. About four dozen ministers, rabbis and priests read in unison a pledge to stand up for religious freedoms. The rally was called in support of the right of Muslims in New York to build the controversial center near the site of the former World trade Center. But there was also acknowledgement that opposition to building the center does not necessarily translate for everyone as opposition to Islam. Still, Nick Carter --president of Andover Newton Theological School and a speaker at the recent interfaith rally in downtown Boston said he thinks the long struggle to overcome opposition to the Boston Mosque should serve as a lesson for those who oppose the planned center in New York.

We are keenly aware of how those feelings were manipulated here in Boston for something that ought to be a legitimate right of a group to build a place of worship, all of a sudden became a political issue, a social issue and so much else needlessly.

And a Presbyterian minister, Herman Hamilton, President of the Greater Boston Interfaith Organization, said the Boston Mosque should serve as a national example of why public fears ricocheting around the country should be put to rest:

All the fears that were articulated have been dispelled. The Muslim community in that Mosque are members of the greater Boston Interfaith organization. They use their resources, their time and their talent to improve the Roxbury community and are fighting for health care reform and all the other issues that we've been fighting for. So it has proven to be a plus. It has proven not to be a source of terrorism. And so it is, I believe with all the other mosques that are now in the middle of controversy. 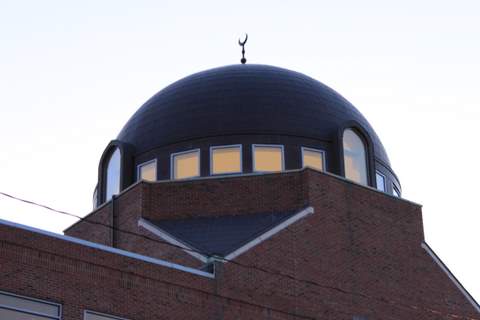 Back at the new Boston Mosque, I met a man originally from Somalia who was wearing the headdress and robes often associated with negative movie images of Muslims. But he says he s a living example of someone who contravenes easy stereotypes.

I work for Homeland security

And because he works for Homeland Security at Boston's International airport (where the World Trade Center terrorists commandeered the planes that drove into the towers), he preferred that his name not be used. But he was both outspoken and optimistic about what he said needs to be done to create an atmosphere of greater tolerance for people such as himself, and said his center can help make those changes:

To help accomplish that, the Islamic Society of Boston is offering a course each Thursday for NON-Muslims called Islam 101. But many people think its gong to take much more than that to ease tensions that have become even more combustible in the nine years since 9/11.