Last night I attended the sneak peak preview party for the partially completed documentary film, Flying Paper at The New School for Public Engagement. The invite described the film as a project that "seeks to humanize the conflict in Gaza through creative voices and cinematic rendering of the fascinating culture of kite making." We had the opportunity to screen a working draft of the film, currently in post-production, co-directed by New School Media Studies faculty member Nitin Sawhney and filmmaker Roger Hill in collaboration with a group of New School students, including Ramon Campos, Francois Vaxelaire, Nagmeh Abbasi, Daniel Nienhuis, Sara Fusco, and Hadeel Assali and a selection of kids they trained in Gaza. You can visit the film's Kickstarter campaign here.

The story follows several Palestinian children on the Gaza Strip as they attempt to build their own kites, fill the sky with paper, and break the Guinness World Record for the number of kites in the air. The story is extra special because the narrative is extended beyond the film online and the kids being documented are trained to work the cameras so they can help to construct the finished product. Eventually the children will produce their own film work as a part of the wonderful Voices Beyond Walls program that exhibits youth-created media from around the world in a digital storytelling format.

In a Q&A following the screening, the filmmakers said they were considering making Flying Paper a documentary trilogy, filming in places like Kashmir and Guatemala. The ongoing nature of the project is inspiring, because it's a narrative that isn't confined to just a film. It follows a blossoming trend of digital storytelling and collaborative, crowdsourced projects that bridge gaps in space, time, and geography, and give people a place to tell their stories to a global community. After the preview of the movie, a man in the audience, visibly moved, raised his hand and said: "Growing up in Palestine, kite flying was the only thing that made me feel free." The man's statement was tweeted by the project and sent out into our networked community in the cybersphere like a kite in the sky; a message that seemed to echo the sentiment of the kids with the kites in the film who were inspired by their own creations that symbolized freedom as they watched them soar into the atmosphere, unburdened.

This made me think of other amazing online storytelling projects that take advantage of our shared gap-reducing cyberspace and transport us to places and personal perspectives that we didn't previously have access to. In particular, I was reminded of Jonathan Harris's digital art project, Balloons of Bhutan, an online repository of stories from Bhutan, described as "a portrait of happiness in the last Himalayan kingdom" (Bhutan measures their quality of life in gross national happiness). For this project, Harris visited Bhutan, photographing and interviewing people there about happiness, assessing their levels of happiness, then handing them a balloon and asking them to write a wish on their balloon. At the end of the project, the wish balloons were inflated and strung on a sacred mountain next to stands of prayer flags. You can explore this project online, click thumbnails of the hands of the storytellers (the hands themselves tell a story), and listen to each individual tale.

I'm also reminded of Caine's Arcade, the short film celebrating one kid's ingenuity that recently went viral receiving over 3.5 million views in less than a week. If you haven't had the pleasure of seeing it yet, the video follows an innovative 9-year-old in California named Caine who built an arcade out of cardboard. Caine's Arcade is inspiring a generation of children all over the world to become more creative and to collaborate and share their projects.

I highly recommend following the journey of Flying Paper and other similar storytelling projects that are popping up on screen and all over the Internet. Small stories can have amplified impact. These portals into other perspectives are immediately accessible and often interactive in a global theater, in real-time, giving us the opportunity to participate and share deeply human slices-of-life, bringing us together all over the world with a click, one story at a time. 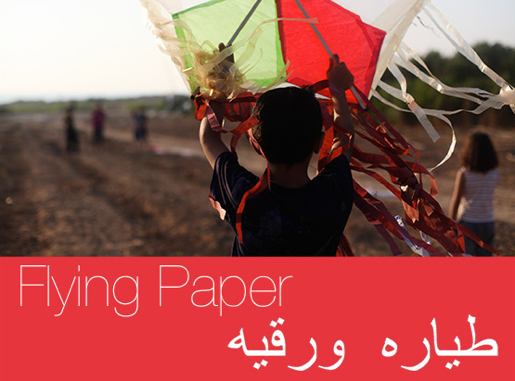