Somos um só. The commercial released by Globo, Brazil's largest communication network, begins with a pair of soccer cleats draped over a power line and ends with a large crowd cheering a soccer game in front of a television. The commercial features a series of images that render Afro-Brazilians nearly invisible. Watching it, one quickly comes to understand that -- much like the myth of racial democracy -- "We are One" is more an aspiration than a reflection of the Brazilian reality. In a nation that has long had a troubled relationship with blackness, it is perhaps no surprise that Afro-Brazilians are nearly erased from the images of exuberant Brasileiros enjoying the World Cup.

Brazil has a long history of constructing discourses of national unity, while simultaneously pushing their black and indigenous populations to the margins. Since preparations for the World Cup began in Brazil, there have been stories of demolition and pacification to enhance a façade of modernity and unity. But behind this façade are protests, police violence, power outages, water shortages, and a general disregard for those not considered elite. As Black American scholars who have resided in Brazil over a number of years in total for our respective research, we occupy a unique position and have witnessed the antithesis of the image of Brazil that Globo and others are trying to present to the world. We have access to both worlds of the privileged and the underserved and have observed how race, gender, and class play out literally and figuratively in the shadows of the world's most global game. 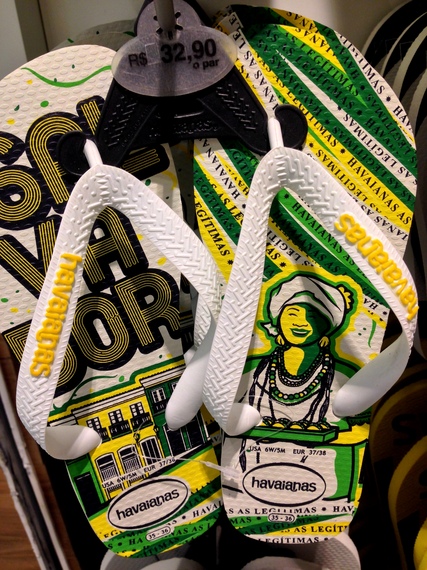 It was in Salvador, Bahia, in a Havaianas store that Melissa saw a display dedicated to the World Cup. Spain, England, USA and France, were displayed and below these rows, she viewed the city-specific sandal for Salvador. Each host city has its own sandal design and the soles of the sandals feature images of the major characteristics of each city. The Salvador sandal featured the architectural landscape of Pelourinho (an UNESCO historic site), the Havaianas themed ribbons likened to those found at the church of Nosso Senhor do Bonfim, and an adorned rubenesque woman in white headdress and clothing. In her hands she is holding acarajé, the traditional dish of Salvador. Although her skin is green and yellow, it is clear that she is a black woman -- a baiana de acarajé.

Baianas de acarajé are a symbolic representation of Africa in Brazil. Acarajé is an African derived food item made of fried ground black-eyed peas formed into fritters. Fried in dendê (palm oil) and made and sold on the street, acarajé is usually accompanied by dried shrimp, a tomato & onion salad, and a pasty condiment called vatapá. As a food offering for the orixá Iansã, acarajé is closely associated with the Afro-Brazilian religion Candomblé. Vendors of acarajé are almost exclusively Afro-Brazilian women, and many are Candomblé adherents.

Salvador, capital of the state of Bahia in the Northeast of Brazil, is known for being the most "African" city in Brazil due to its large Afro-Brazilian population and strong preservation of Afro-Brazilian culture. In Brazil, the commodification of blackness is pervasive and longstanding. The marketing of blackness is central to Bahia's place in the transnational tourism industry. For example, we can see this in the historic city center where people pay to take a picture dressed as a baiana de acarajé or a capoeirista with faux dreadlocks.

The image of an Afro-Brazilian woman on the sole of a flip-flop to be walked upon is deeply political, economically charged, and troubling. The contradictions surrounding baianas de acarajé in Salvador are emblematic of the persisting marginalization of black women in contemporary Brazil. Although baianas de acarajé are considered an integral part of Bahia's cultural patrimony, they have been engaged in a battle with FIFA over the past few years just to be allowed to sell their Bahian delicacies at (or within two kilometers of) the Fonte Nova stadium (so as not to compete with McDonalds, one of the sponsors). After much protest by the Association of Baianas de Acarajé and their supporters, FIFA agreed to allow a limited number (six) of baianas to sell acarajé inside and around the stadium in June 2013. The images on the Havaianas sandal and in the correspondence of FIFA Weekly reiterate and perpetuate the historical roles to which black women have been relegated in Brazil -- the erotic/exotic and the domestic/labor.

Erica's latest project has involved speaking with black activist women based in Salvador who are fighting to claim recognition beyond domesticity and exoticism. In much of the World Cup imagery, Afro-Brazilian women are featured as erotic resources necessary to ensure a successful and fulfilling trip to Brazil. This is evident in a recent travel tip document created by FIFA for tourists to Brazil. It features an image of two brown-skinned women lying stomach-down on the beach. Scantily-clad in Brazilian bikini bottoms, the women lay watching as a group of men play an exuberant game of futebol. Though this image is based in Rio de Janeiro, it fits with many of the tourism advertisements Erica found in her previous research on sex tourism, in which black women's bodies are featured as an integral part of the lure of Bahia. These examples have urged black women's organizations across Brazil to organize to march on Brasília for the Marcha das Mulheres Negras Contra o Racismo, Violência e Pelo Bem Viver (March of Black Women against Racism, Violence and for Living Well) in March 2015. It is a step, they hope, in garnering attention for an often neglected population.

While World Cup propaganda attempts to unify the Brazilian nation under the flag of the "national religion" of futebol, this reinforced national unity consists of the same forces of gendered racism and inequality that continue to separate Brazil.