It was an interesting road into the "producer's" chair for me and Saucy Monky. A.k.a. the "queen's chair" as I like to call it. The climate in the early 2000's was definitely pre-DIY. Labels were thriving and people were still holding out for juicy record deals. I was one of the first indie girls to identify as such in my music community in Los Angeles. We actually didn't have much of a community at the time. I'd like to think I had a hand in creating one.

Off the success of Ani DiFranco and Righteous Babe Records, who inspired me to start olivoiL records, I was booking community events under the guise of "indieNights" long before the girls in San Diego started their impressive IndieFest series. I was also hosting songwriter in the rounds (with Annmarie Cullen), the first real underground songwriter's series before Room 5 adopted the idea and ran with it. Our early shows showcased unknown-at-the-time talents like Sara Bareilles and Gaby Moreno. Indie was not in vogue when I became an indie girl. So it was a natural progression to adopt the DIY mentality into all fields of our projects. It was a necessity, in fact, to keep our band moving forward on that fast track to European success in 2003. 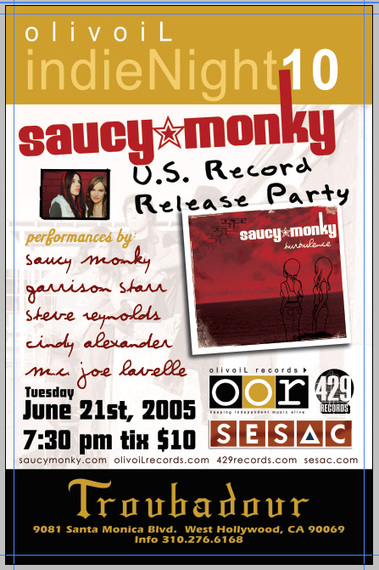 I learned a few tricks in Digital Performer and Pro Tools from my first producer and friend, Tad Wadhams. Tad is an incredible bassist. His claim to fame was being an original member of Sheryl Crow's breakout band. He penned a few songs with her as well. I got my early gear aesthetics from Tad. He introduced me to the world of quirky sounds, instruments, amps and the musicians who used and appreciated the stuff. You can liken it to driving a sexy ole Mustang instead of a fancy Beemer. Perhaps the BMW will get you there faster, and with fewer breakdowns, but it won't feel as good or be as much fun!

When I started recording bits for early Saucy songs, I really didn't know a stitch about engineering. I'd put a 57 up to anything and hit record. That was a great way to jump in and get my feet wet. Around the same time, I fell into the world of live sound mixing. The day I got my first job at the Temple Bar in Santa Monica, I also applied at a clothing store on Main Street. Somehow, I said the right things to get that footsy in the door. I mixed my first few shows, and somehow survived the stress of really not knowing ANYTHING about mixing live sound. I have memories of promoters and band managers standing behind me, in a panic, while I figured out how to execute their requests. Trial by fire really doesn't describe it!

I moved through my other sound jobs in the same fashion. The first week during my three or four years on staff at the Knitting Factory LA, I was in the main room mixing a special, sold-out KCRW record release party. I won't mention the artist, but I can say, she probably still remembers me. They were at the helm of the Troubadour resurgence in the music world brought back by Damien Rice. Soft whispery voices, au naturel instrumentation, with close mics and quiet dialogues. At some point during the show, someone in the sound booth kicked off the front of house power amps and she was no longer being amplified. The artist started saying things to me from the stage. I was sweating bullets, my forehead damp with stress perspiration. My heart was beating like a canon and I thought I might be die a slow, humiliating death. My co-worker at the time, a fella who went on to record and perform with Linda Perry the producer and hit songwriter, said "I don't know how you can keep going with people saying those things to you." By some miracle I discovered the amps were down, I turned them back on and kept muscling through the show, boos, sweaty pits and all. This tangent to say I did eventually become a great sound person. That knowledge fed my abilities and passion for recording my own records. Turbulence, my first self produced album went on to get 9 out of 10 stars in Hot Press, Ireland's equivalent to Rolling Stone.

I'm still producing my own stuff. Even when I try to avoid the queen's chair -- I find myself a loyal subject back at the helm, in an eager quest to "serve the song." I slow dance with the material. I experiment with different instruments, rhythmic approaches, collaborators, in an effort to bring those stories to life. My issue nowadays is knowing when to stop. I recently heard someone say "a painting is never finished, you simply stop mid-stroke and move on to the next." This is a good metaphor for me to follow. As I sit in my studio birthing this batch of songs, in that DIY spirit that keeps my dharma flowing, the minutes timeless, my heart-a-flutter, the joy, the surprise, mixed in with a high-brow taste for artful things. I search for the perfectly imperfect soundscape, that tingly effect, one connecting me to the days when I sat ear phones a blast in front of my parents home stereo system, lost in the magic of my music making heroes.