Despite recent claims, the golden ratio is more interesting than ever.

That's how Fast Company summed up the golden ratio in April. According to writer John Brownlee, that mainstay of art appreciation classes and junior-high geometry is "total nonsense," "an urban legend, a myth, a design unicorn."

Interest goes back to ancient Greece or even earlier. In 300 BC, Euclid explained that the "golden ratio," or Phi, occurs when a line can be divided into two segments so that the ratio of the overall line to the longer segment matches the ratio of the longer to the shorter. Subtract a square from a golden rectangle, and what remains is another golden rectangle, and so on and so on. Astronomer Johannes Kepler called Phi geometry's "precious jewel," and Renaissance artists considered it the "divine proportion." The golden rectangle appears -- or is said to appear -- in works of art and architecture throughout history.

"Many designers don't use it," complains Brownlee, "and if they do, they vastly discount its importance." After acknowledging that "greats like Le Corbusier" used the golden ratio in their work, he devotes nearly a third of his article to quoting architects and designers who don't: "It's important as a tool, but not a rule" (Yves Béhar). What "rule" does he mean? As an architect with 25 years of experience, I don't recall anyone ever suggesting that the golden rectangle should be considered aesthetic law or even a common technique. Generally architects associate it with a few historical structures, such as the Parthenon, whose façade approximates the ratio. That was 2,500 years ago.

Nevertheless, Brownlee's chief concern with the golden rectangle is that "there's no science to really back it up." The Stanford mathematics professor Keith Devlin tells him, "Strictly speaking, it's impossible for anything in the real-world to fall into the golden ratio, because it's an irrational number," one that cannot be represented as terminating or repeating decimals. Phi is rounded off as 1.618, but its true value is 1.618033988749894848204586834... (ad infinitum). It's like Pi, writes Brownlee: "Just as it's impossible to find a perfect circle in the real world, the golden ratio cannot strictly be applied to any real world object. It's always going to be a little off."

Reading this, you might think that satisfying circles don't exist "in the real world." What do you think of the rose window at Notre Dame, or the oculus of the Pantheon? Their arithmetic imperfection drives you crazy, right?

"Those who believe the golden ratio is the hidden math behind beauty," Brownlee declares, "are falling for a 150-year-old scam." He doesn't fully explain the "scam" or exactly who is falling for it, but regardless he blames two people -- the Renaissance mathematician Luca Pacioli and the 19th-Century psychologist Adolf Zeising. Yet, they were less interested in the "real world" than they were in what Zeising called "the spiritual ideal of beauty" and Pacioli, a Franciscan friar, referred to as "heavenly virtue": "We expect in this most useful discourse God himself to come." Phi's irrationality doesn't refute their interest--it explains it. The golden ratio intrigued them because it hints at infinity, invoking a Platonic order that transcends earthly experience. 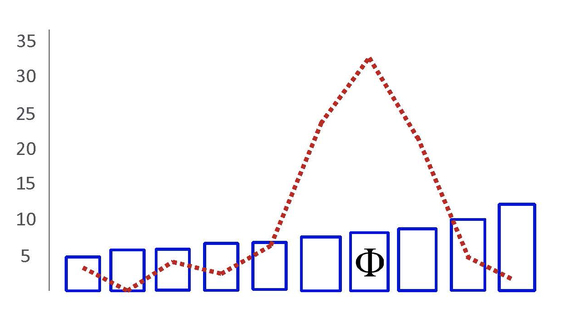 In the 1870s, Gustav Fechner asked 350 people to choose which rectangles they liked most. 76 percent preferred the three closest to the golden ratio, and half those chose the one closest to Phi. Illustration by the author.

Brownlee doesn't mention Gustav Fechner, the German physicist and psychologist who in the 1870s was the first to attempt an empirical study of whether people have an aesthetic preference for the golden rectangle. When he showed ten rectangles of various proportions to a few hundred people, 76 percent preferred the three most similar to the golden ratio, while half that group preferred the closest approximation of Phi (1.62). Mario Livio, whom Brownlee names as "the guy who literally wrote the book on the golden ratio," writes that experiments attempting to repeat Fechner's results have been inconclusive, but he points to a 1980 study demonstrating "moderately good evidence for the phenomenon which Fechner championed." A widely cited 1995 paper shows that much of the criticism of Fechner's experiment is clouded by "erroneous beliefs" about his procedures and concludes that "there seems to be, in fact, real psychological effects associated with the golden section." In 2007, neuroscientists at the University of Parma found that images very close to the golden ratio stimulated more activity in parts of the brain associated with emotion.

If that's true, what accounts for it? Why would we prefer certain proportions over others? In the 1960s, a group of American psychologists offered an intriguing explanation -- that the golden ratio relates to the shape of the human visual field. We prefer the image, so the theory goes, because it most matches the frame around our picture of the world. This came to be known as the "perimetric hypothesis."

In 2009, Duke engineering professor Adrian Bejan offered proof. According to his calculations, the human eyes can scan an image fastest when its shape is a golden rectangle. Why is this important? As with many cultural and aesthetic preferences, there's an evolutionary explanation: The more quickly early humans could process their surroundings, the safer they were. "The shape of the image matters to how the image is perceived, understood and recorded," explains Bejan, who found that for a given area the proportions most quickly processed are closest to the golden rectangle. They aid the flow of information "from the plane to the brain." 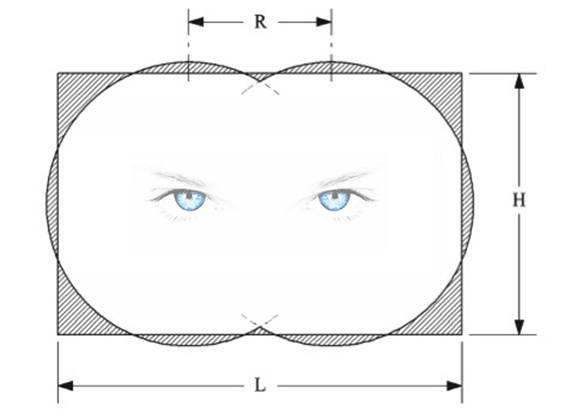 In 2009, a Duke Professor proved that ratios close to Phi can be processed by the eye and brain more quickly. After Adrian Bejan, et al.

But, insists Brownlee, images in the "real world" are not precise golden rectangles: "The iPad's 3:2 display, or the 16:9 display on your HDTV all 'float around it'... It's always going to be a little off.'" According to Bejan, "a little off" is precisely the point. Because proportions similar to the golden ratio occur in very large numbers, he explains, they are a natural phenomena, so they obey the laws of nature -- the laws physics -- not necessarily the laws of mathematics: "The physics phenomenon is not Phi itself. No one has found and measured Phi on an object in nature... The physics phenomenon is the emergence of shapes that resemble Phi." Figures that appeal to us need not match a mathematically perfect image, since we naturally seek out shapes that come close.

Yet, Brownlee claims there is no scientific evidence to support "the notion that the golden ratio had any bearing on why we find certain objects like the Parthenon or the Mona Lisa aesthetically pleasing." If he did his homework, no doubt he came across Bejan's work. "The physics basis for the human preference for rectangular frames that 'resemble' the golden ratio is easy to find on Google," Bejan tells me. "So he must have skipped it on purpose, to fit his narrative."

Should the golden ratio be applied as a "rule" to govern all design? No, but behind such techniques is a growing wealth of research that can help designers understand better why people treasure some things and not others. As one example, the golden ratio shows how the mechanics of attraction can help us create images, objects and places that resonate with more people and create greater lasting value.