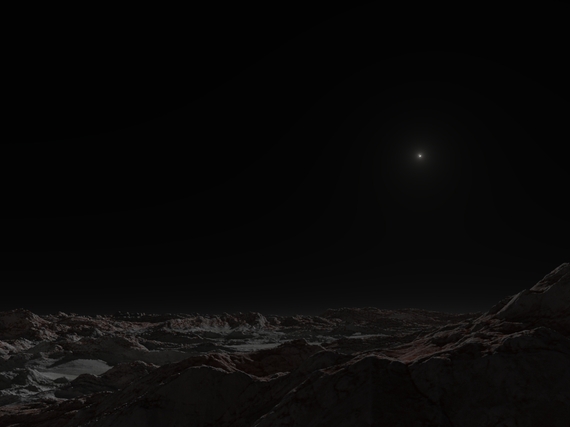 The Solar System has been giving up its secrets to us little by little. From the earliest Stone Age astronomers to today's Astrophysicists, we march forward in the quest for knowledge and our scientific endeavor has been richly rewarded. We have been treated to unprecedented views of our place in space and our retinue of planets.

We have seen Pluto in amazing detail, a wrongfully demoted planet in my view with 5 moons of its own with a richly varied terrain. We have seen water ice geysers on Saturn's moon Enceladus, discovered a slushy ocean 100 miles deep on Jupiter's moon Europa, and witnessed an early Earth environment on Saturn's moon Titan. These are just a few of our "greatest hits".

For centuries though we have wondered if there could be a tenth planet out beyond Pluto. Well, the debate was actually settled back in 2005 when a tenth planet, (or ninth if you don't believe Pluto is a planet), was indeed found. Given the unceremonious temporary name 2003 UB313, the newly-found planet is 97 astronomical units from the Sun.

An astronomical unit or AU as you may know is the distance from Earth to the Sun. In miles an AU is 93 million miles.The newly found planet is 97 times further away. At that extraordinary distance, the feeble light of the Sun takes nearly 13 HOURS to arrive.

Pluto is 40 AU away from the Sun compared to 2003 UB313 and can be seen only in the most powerful telescopes as a tiny dot of light. But Pluto's gravitational effects on the other planets is measurable and led to its discovery. Even if only by mistake... (read on)

Taking a step back in history lets look for a moment at the discovery of the planets Neptune and Pluto.

Astronomers in the years leading up to 1846 noted that the planet Uranus was not appearing in its predicted positions based on the understanding of the Solar System at that time with consideration given for Newton's gravitational laws.

Theories suggested that another planet, an 8th planet, was causing the perturbation noticed in the orbit of Uranus. Neptune was later found after a systematic search in the predicted location by Johann Galle at Berlin Observatory in 1846.

In the years leading up to 1905, Percival Lowell, an American Astronomer noticed that yet another object seemed to be causing both Uranus and Neptune to be perturbed in their expected orbits. Something farther out was causing it in his view. Lowell dubbed it "Planet X" and hunted for it unsuccessfully for the remainder of his life.

In 1930 Clyde Tombaugh, a man of slight stature but of incredible intellect, discovered the elusive "Planet X" using Lowell's prediction algorithms. And thus our 9th planet was found. But interesting to note is that the prediction of Pluto's approximate location was not based on valid data as it turns out!

Pluto's mass was lower than predicted and the perturbation to the motions of Uranus and Neptune couldn't possibly be explained by a planet as small as Pluto. So the discovery of Pluto in that location where Lowell predicted was actually coincidental.

What could cause the unexplained motions of Uranus and Neptune? Many astronomers came to the conclusion that there had to be other more distant objects orbiting the Sun in our Solar System. Theoretically they would have to be traveling in very elongated or eccentric orbits. Others in circular or near circular orbits.

These objects can not only explain the motions of Uranus and Neptune, but also explain why the outer Solar System far beyond Pluto look as it does. Beyond Pluto there is a collection of objects orbiting the Sun on a many thousand year orbit each.

These objects, still within the confines of our defined Solar System are called Trans-Neptunian objects or TNOs. As it turns out, there are several tens of thousands larger TNOs all out in a region known as the Kuiper Belt and many thousands more of the small ones.

The Kuiper Belt is a large band of space in the Solar System starting approximately at Neptune's distance of 30 AU and extending perhaps out to as much as 50 AU. Within the Belt there are likely millions of comets waiting to be perturbed into the Inner Solar System.But it is the TNOs that are responsible for the misunderstood motions of the outer planets.

The existence of TNOs prompted conspiracy theorists to suggest that there is a "Planet of Doom" heading our way that will disrupt our world and perhaps destroy it. It has been given names such as Nbiru, or Planet X.

While there is no question that another Earth sized planet could lurk in deep space far out in the Kuiper Belt, it is also well known that no such objects are near the Earth presently. The force of its gravity would have belied its presence decades ago via small unexplained perturbations wrought upon the orbits of the other planets.

There haven't been any. such perturbations that remain unexplained by TNOs. But that doesnt stop those who we refer to as "science free" from saying Nbiru exists and Earth is in imminent danger, perhaps hoping to bring some attempted future postmortem attention to themselves. I have heard every theory it seems,

There is the possibility that a larger body in the Kuiper Belt could eventually be dislodged from its orbit by a passing star or collision and begin the thousands of years trek to the Inner Solar System where it may indeed spell the end for all life on Earth.

There is even the possibility that those waiting for their "Nbiru" might receive satisfaction in the far future if such a planet-sized object is knocked out of the Kuiper belt and sent hurtling toward us. To be fair though its far more likely that an errant asteroid strike will occur long before then or that Yellowstone's super volcano will erupt.

But for now anyway we are safe!

Thanks for reading and see you next time!